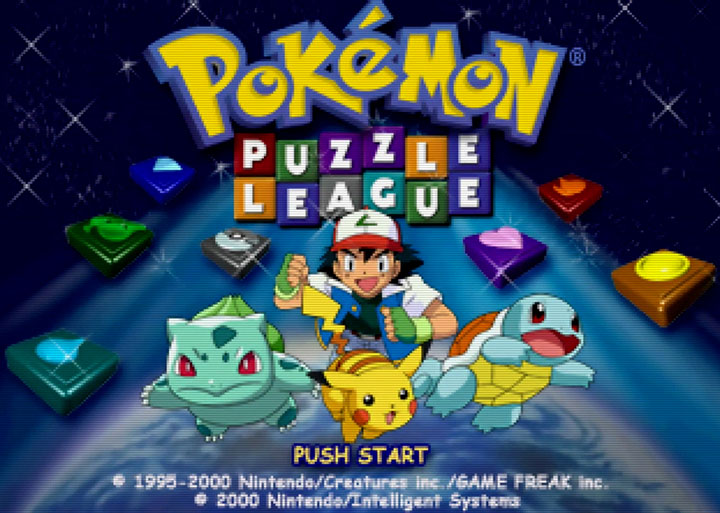 By the year 2000, the N64 had been well and truly trounced by Sony’s PlayStation. It’s popularity with gamers was waning, but Nintendo still had an ace up its sleeve: Pokémon.

The original Game Boy series had exploded into the worldwide phenomenon it now is almost overnight. And Nintendo knew it was a sure-fire way to drum up sales for its flagging home console.

Whereas the Game Boy remained the home of the core game series, the N64 offered alternative experiences that typically made the most of the console’s 3D visuals.

Pokémon Puzzle League is the outlier of this bunch. It features 2D visuals and the actual game concept has very little to do with the source material. In fact, it’s essentially a reskin of SNES puzzle game Tetris Attack.

Despite this, is the game any good? And is it still fun to play today?

Pokémon Puzzle League opens with a full-motion video intro – rarely seen on the N64 due to the limited storage afforded by cartridges. Pokémon trainer Ash Ketchum receives a call from Professor Oak, telling him he’s been invited to take part in a new kind of Pokémon tournament.

What follows has very little to do with the original Pokémon concept. Sure, it looks and sounds like Pokémon, but it certainly doesn’t play like it.

That’s because Pokémon Puzzle League is a tile-swapping battle puzzle game. The gameplay involves swapping coloured tiles on a game board that slowly moves up the screen. Combine three or more to clear them from the board.

Matching more than three at a time results in a bonus that, in most game modes, dumps large “garbage” blocks onto the opposing player’s board. Therefore, the goal is to get the biggest possible matches and, if possible, chain them up so you pull off multiple combos in a single turn.

Doing so repeatedly is a guaranteed way to cause chaos for your opponent and win the battle. Although the dumped blocks aren’t ideal, they’re a great way to create chains (and thus send more blocks back the other way). This constant back and forth quickly escalates things, resulting in chaotic, enthralling face-offs.

This gameplay loop is incredibly satisfying and gives Pokémon Puzzle League an addictive quality that can keep you playing for hours.

Characters, music and voice clips from the anime TV show feature throughout, all of which are cosmetic in nature. It’s very authentic and true to the source material, and will no doubt appeal to fans.

Variety is the spice of Pokélife

Pokémon Puzzle League has many game modes to try. Most of these are usual fare for a puzzle game, such as the marathon and time limit modes.

Be a puzzle master in 1P Stadium

1P Stadium is the game’s story mode and involves facing off against numerous characters in head-to-head puzzle battles. The game makes you choose which Pokémon to use before each battle, but this has no bearing on the gameplay whatsoever. It’s literally just an extra menu screen that simply changes your game board’s background.

This mode has multiple difficulty levels to play through. Whereas the easy mode provides a comfortable introduction to the game, the two hardest settings demand a solid understanding of the game’s mechanics. If you’re not pulling off consistent combos and chains, you will lose in a matter of seconds. If you watch a Super Hard mode playthrough on YouTube, you’ll see just how well the AI keeps up with a constant onslaught of block drops from highly skilled players.

Unless you have a natural affinity for puzzle games, the chances are you’ll be seeing the game over screen a lot. Pokémon Puzzle League demands a lot of time and practice, and so it’s just as well the gameplay is addictive. Thankfully, the game over system is pretty forgiving; you always continue from the last match you lost and never have to go back to the beginning. The only exception is the game’s final battle, which for some reason sends you back to the level before.

Of course, the more you play, the better you’ll get at identifying patterns and setting up combos. At higher difficulties, many matches often come down to pulling off a lot of early combos so you can quickly overwhelm your opponent before they do the same to you.

Learn to play – but not with these modes

Pokémon Puzzle League includes two modes to help you learn the game. But they’re a real mixed bag in terms of quality. How to Play amounts to nothing more than a generic list of slow computer-controlled demos. In a world where YouTube has become the norm for video game tutorials, these demos feel very outdated.

There’s also Mimic mode. Here, the computer shows you a combo, which you must then repeat yourself. It’s a clever idea, but it has the opposite problem to How to Play: it demonstrates certain things way too quickly. It’s very easy to make a mistake, only for the game to then make you watch the entire explanation again.

Thankfully, these modes are not mandatory, nor do you really need to do them. In fact, you’re better off just playing one of the other game modes and learning by doing.

It’s an interesting idea. In this mode the width of the playing area increases threefold and circles back on itself in a cylinder. You have lot more you need to keep an eye on at any one time, and the potential for forming combos is greater due to the increased number of tiles.

But – if you’ll excuse the pun – it all falls a bit flat. The 2D mode feels much more exciting, because all the action takes place in one area of focus. It’s more chaotic when you’re hit with garbage blocks and more rewarding when you pull off a chain combo with fewer blocks to choose from.

As I’ve said before, Pokémon Puzzle League is one of the best N64 multiplayer games.

The puzzle battle gameplay is a natural fit for multiplayer, resulting in a chaotic to and fro between players as you each try dumping garbage blocks on one another.

And the fact that you don’t need to know Pokémon to play it is another bonus. Not only that, but Pokémon Puzzle League has a real pick-up-and-play quality about it – it’s incredibly easy to learn, but difficult to master.

The quality of the 2D artwork is decent for a game of its age too. Character drawings and locations are taken straight from the TV show, and so everything looks accurate, if a bit static. Of course, the N64’s lower resolution and enforced anti-aliasing makes things look a bit blurry. But this is very minor, and the game remains perfectly playable. Play on a CRT TV or use a decent upscaler for the best experience.

Pokémon Puzzle League is a stark reminder of the limited storage afforded by N64 cartridges. The game uses a mere 32MB cartridge. As a result, the full-motion video, music tracks and voice clips are all heavily compressed and short in length. The Pokémon TV show has some very catchy tunes, and it’s a shame they don’t appear in their original glory.

At first glance, you could be forgiven for thinking Pokémon Puzzle League is nothing more than a cynical game reskin. After all, the Pokémon theme doesn’t really add much in the way of gameplay.

But it doesn’t matter, because Pokémon Puzzle League is an incredibly fun game regardless. The tile-swapping gameplay is immensely addictive, and learning how to pull off huge combos and chains is very rewarding. Even if you’re not a huge Pokémon fan, it’s hard not to be drawn in by it.

It’s also not for the faint hearted. The single-player mode is incredibly tough at higher difficulties and demands nothing short of mastery. But there’s also a good range of more relaxed modes for those who don’t want such a gruelling challenge.

If you’re looking for your next puzzle game fix, you really can’t go wrong with Pokémon Puzzle League. 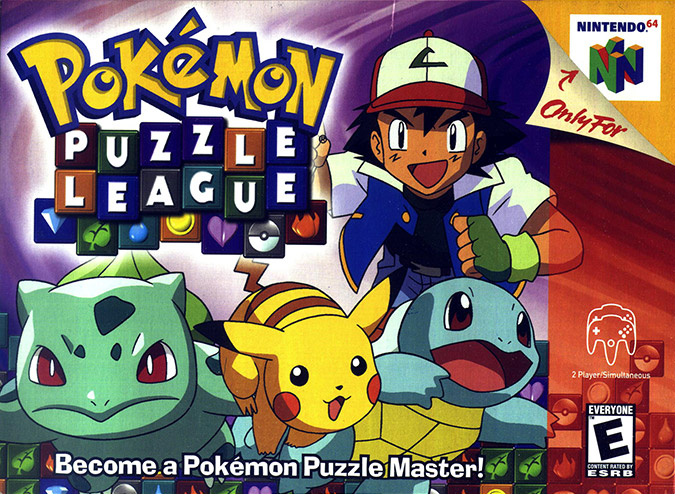