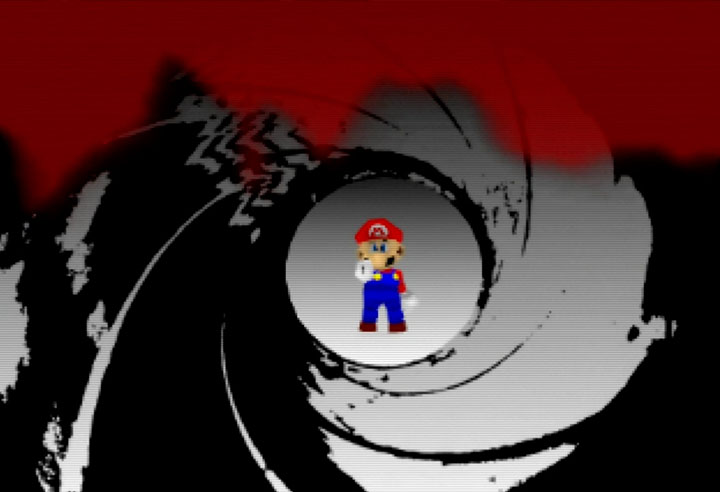 Ever wondered who would win in a gunfight between Mario and Luigi? Well thanks to GoldenEye with Mario Characters, you can find out once and for all!

Developed by StupidMarioBros1Fan, this new GoldenEye 007 mod swaps out the entire Bond cast for characters from the Super Mario universe. It also includes three new single-player missions and 29 multiplayer maps.

You can even play the mod on an N64 console using a flashcart. I’ve included details on how to do this in the article.

For the Mushroom Kingdom, Mario?

GoldenEye with Mario Characters’ single-player campaign follows the same plot as the original game but with altered dialogue.

Many Super Mario characters make an appearance. Luigi replaces Trevelyan as Mario’s traitorous ally, with Daisy (Xenia) and Bowser (Ourumov) as his cronies. Koopa Troopas act as enemy guards and Toad takes on the renowned role of Dr Doak.

StupidMarioBros1Fan has also added new content and even restored elements that previously featured in the GoldenEye 007 beta.

Bob-omb Battlefield’s mission structure pays homage to the original. Your objectives include racing Koopa the Quick and defeating Big Bob-omb. However, instead of throwing the ol’ King around, this time you unceremoniously gun him down. The enemy Bob-omb foot soldiers also explode upon death – a nice (if brutal) throwback to Super Mario 64.

Similarly, Big Boo’s Haunt tasks you with hunting down all the Boos. Doing so will make a dual-wielding Big Boo appear for the final showdown. At higher difficulties, you have to kill him more than once, which also involves exploring more of the level.

Princess Peach’s Castle brings this new trio of missions to a climactic finish. Here, you face off against Bowser, who keeps coming back from the dead much like Baron Samedi in GoldenEye 007’s Egyptian mission.

All three custom levels are entertaining, and it’s interesting how well the environments work with GoldenEye 007’s gameplay.

You’d also think that combining the serious setting of 007 with the whimsical style of Super Mario wouldn’t work. But the surreal nature of it all actually makes it absurdly funny, whether it’s seeing a KF7 Soviet-toting Koopa Troopa or Luigi telling Mario to “Blow them all to-a hell!” in Facility.

This mod also adds new features to the multiplayer mode. There are now 20 weapon sets and 29 multiplayer maps to choose from.

Although the majority of maps are locations from the single-player game, they’re actually based on how they appeared in the cancelled GoldenEye 007 remaster for Xbox Live Arcade or GoldenEye: Source for PC. StupidMarioBros1Fan has released a trailer for the mod, which also highlights where the similarities and differences are:

Getting around GoldenEye 007’s menu limitations

Up until now, GoldenEye mods could only insert a new level into the game by replacing an existing one.
Thankfully, StupidMarioBros1Fan has implemented a clever (albeit clunky) workaround to get past this restriction. The single-player mode now features a new “Temple” mission, in which you can change certain settings and swap between map selection screens.

When you enter the level, you can activate two computer terminals to switch to the next single-player or multiplayer map screen. You then just need to quit the mission (or foolishly try to kill StupidMarioBros1Fan’s avatar…) and go back to the menu.

I really hope this improvement appears in future GoldenEye 007 campaign or multiplayer mods.

How can I play GoldenEye with Mario Characters on my N64?

You will need a flashcart, such an EverDrive 64.

Then go to Mod DB to download the GoldenEye with Mario Characters patch file. You will also need to find a NTSC (USA) ROM of the original GoldenEye 007.

Download Delta Patcher to apply the patch file to the game ROM. It’s an incredibly simple program — just follow the on-screen instructions after opening it.

I’ve tested the mod extensively and haven’t come across any major issues. In multiplayer, some maps do struggle a bit (Surface is impressively huge, but prone to slowdown). Nevertheless, the game remains fully playable.

What do you think of GoldenEye with Mario Characters?

More of a Sonic fan? If so, you may want to check out the GoldenEye with Sonic Characters mod.