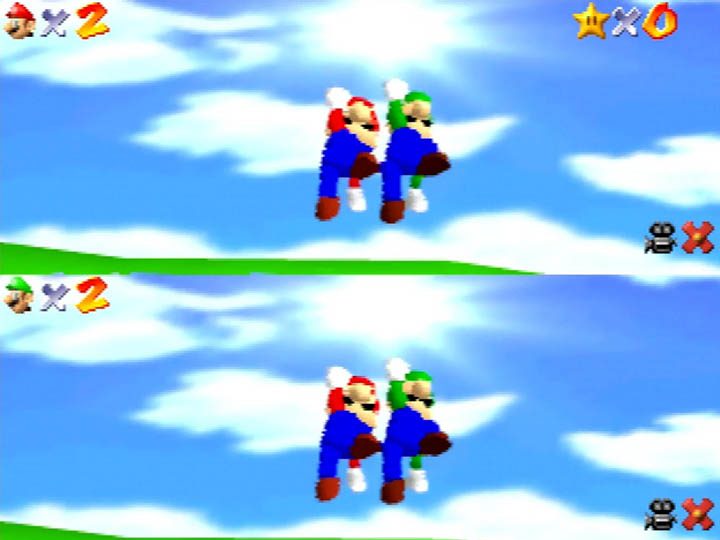 Have you ever played through a single-player N64 game and thought how great it would be if it supported co-op?

Well thanks to the wonder that is the N64 modding community, some games now offer co-operative modes. I’ve put together the following list detailing all currently available N64 co-op mods you can play on original hardware.

To play these mods on an N64 you’ll need a flashcart, such as an EverDrive 64. I’ve also included instructions on how to set up each mod to run on your flashcart.

Otherwise, you may want to also check out my full list of original N64 co-op games — there are quite a few already!

Bomberman 64’s story mode is something of an underrated gem. And it now shines more than ever thanks to a recent co-op mod.

Created by Coockie, this mod enables you and another player to team up throughout almost the entire story mode together. (There’s one boss battle that doesn’t work).

Just insert a second controller into your N64’s fourth port and start a new game to activate co-op.

The camera still follows the first player in this mod, meaning it’s possible to lose the second player off screen. Thankfully, the second player can simply press L to teleport back to player one if this does happen.

Of course, double the Bombermen means double the deadly explosions. To account for this, the mod won’t deduct a life when someone dies — unless one of you dies out of bounds. As a result, the gameplay has a good flow to it and feels a lot less frustrating than it could.

You can also pick up and throw one another, which is really ideal for reaching places you’d normally have to bomb bounce to. Just be warned that player two is not able to activate switches.

You need to apply the Bomberman 64 Co-op patch file to the ROM file. Use the downloadable Delta Patcher tool to do this.

Once you’ve used the tool to patch your ROM, put it on your flashcart and you’re ready to play.

Burn rubber with three other players in Mario Kart 64‘s Grand Prix mode with this awesome mod by HootHoot.

Technically speaking, Grand Prix mode isn’t actually co-op. Rather, you can choose to team up if you want to.

It’s worth doing as this greatly increases your chances of winning a gold cup, which you’ll need to fully complete the game. Also, the game’s AI players are notoriously cheap — especially at higher difficulties — so having friendly reinforcements is ideal.

Despite an extra two players in the game, this mod manages to maintain a playable frame rate. That said, you do need an N64 Expansion Pak to play it.

You need to apply the patch file to the Mario Kart 64 ROM. Use the downloadable Floating IPS tool or the online Hack64 web patcher to do this.

Once you’ve done this, put the patched ROM onto your flashcart and you’re good to go!

L is Real thanks to this amazing hack by Super Mario 64 modder Kaze Emanuar.

Super Mario 64 Splitscreen Multiplayer enables you and a friend to team up as Mario and Luigi throughout the full 120-star adventure. The technical performance takes a dip, but it’s still smooth enough to be fully playable.

Exploring with another player provides a couple of advantages. In some instances, boss fights are a lot easier. It’s also possible to sometimes sneakily nab two stars within one mission, enabling you to progress more quickly.

And yes, you can even beat each other up if you so desire!

You need to apply the patch file to the Super Mario 64 ROM. Use the downloadable Floating IPS tool or the online Hack64 web patcher to do this.

Once you’ve done this, put the patched ROM onto your flashcart and enjoy!

What do you think of these N64 co-op mods?