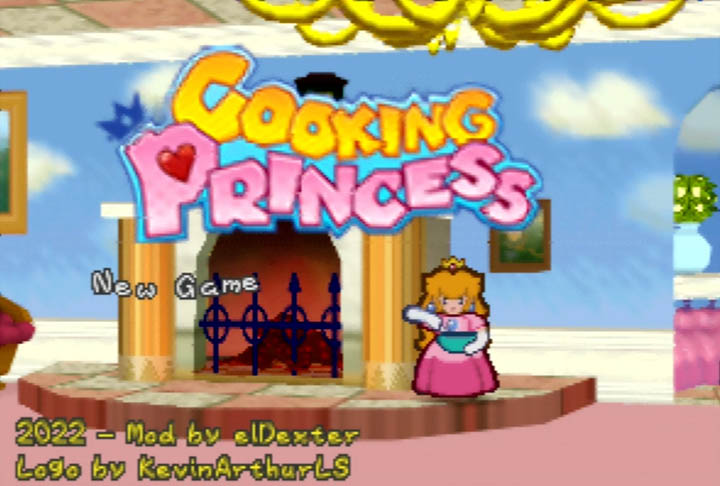 Cooking Princess is a brilliant example of how N64 mods can take modern game ideas and turn them into new games.

Created by elDexter for the Paper Mario Modding Jam 2022, this mod takes the chaotic culinary gameplay of 2016’s Overcooked and puts it into the world of Paper Mario 64.

Overcooked is renowned for its couch co-op multiplayer fun, but unfortunately Cooking Princess is a single-player only game. Nevertheless, it’s a fun, bite-sized jaunt that’s definitely still worth checking out.

This mod is fully compatible with an original N64 console, and I’ve included instructions on how to play it this way in this article.

In Cooking Princess, you play as Princess Peach doing what she does best. No, not being kidnapped — baking cakes!

The goal is to cook as many cakes as you can within the time limit. Just like baking an actual cake, this requires you to gather all the ingredients, mix them together, cook in the oven, and then decorate.

You have to make each cake to order and serve it as quickly as you can to score points. If you take too long, you’ll be penalised and lose the order.

If you’re already familiar with Overcooked then you’ll immediately understand Cooking Princess’ gameplay premise. For the uninitiated, there’s a quick and helpful tutorial that plays at the beginning. That said, it’s incredibly simple to pick up and play.

There are five levels in total to play through. These become more unorthodox and introduce new obstacles as you progress.

For example, in the second level, a busy crowd of Toads will frequently walk through the area between the kitchen’s two workstations, occasionally blocking your route. Another stage has moving fireballs, which teleport you back to the starting point and also destroy any dishes you may be holding.

Keeping on top of your orders while navigating these obstacles is challenging, requiring you to think about timing and risk. There’s nothing more soul crushing than losing a finished cake because you carelessly ran into a lava pit.

Just like in Overcooked, Cooking Princess grades your performance in each level.

You need to complete a lot of orders to get the highest rank (three stars). Achieving this typically requires you to multitask and prepare multiple orders at the same time. Initially, it can feel overwhelming, but once you work out a pattern, it’s amazing how efficient you can be.

Once you’ve completed a level, it’s possible to replay it from the level select menu. I’m glad the option was included, because unlocking three stars in every level is no small feat. It’s also highly unlikely you’ll manage it first time round.

How can I play Cooking Princess on my N64?

To play Cooking Princess on an original N64 console, you will need:

You need to apply the Cooking Princess patch file to the Paper Mario 64 ROM. You can do this using the downloadable Floating IPS tool or the online Hack64 web patcher.

Once you’ve done this, put the patched ROM onto your EverDrive 64 and you’re good to go!

What do you think of Cooking Princess?

Is this a mod you want to play? Let me know what you think about Cooking Princess on Twitter.