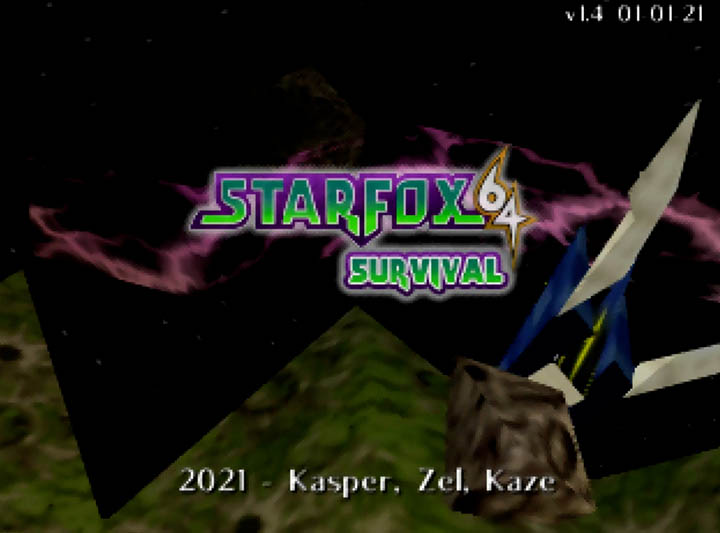 Despite its name, Star Fox 64: Survival has very little to do with Star Fox 64. It’s actually a mod of The Legend of Zelda: Ocarina of Time, but with Fox McCloud as the main character.

It’s a relatively short game, but it has a cool premise and presents a decent challenge. What’s more, it’s fully playable on an original N64 console — I’ve included instructions within this article on how to play it.

Fox McCloud has crash-landed his Arwing on a strange, unknown planet — bizarrely inhabited by enemies from Ocarina of Time. He’s now stranded and must survive 30 days before he can escape.

Each day, you must defeat all the enemies located in a large outdoor area. If you’re successful, you’ll receive a reward and be able to enter (or re-enter) a separate rest area. Here you can buy items and equipment, as well as sleep to restore your health and start the next day.

Star Fox 64: Survival makes clever use of enemy and item randomisation to create a challenging experience. Which is just as well given combat is the core focus of this mod — there aren’t any puzzles to solve or dungeons to explore.

If you’re a fan of the traditional Star Fox games then you may not find much of interest here. Aside from the Fox McCloud character model and voice samples, it looks and plays like Ocarina of Time.

Don’t get too cocky, Star Fox!

Star Fox 64: Survival does a great job of throwing you in at the deep end. You begin the game with only a sword and nothing else. For enemies that your sword can’t defeat, you can use one of the many bomb plants scattered around the main area.

The enemies are completely randomised from the start. This means tricky foes such as Stalfos and Iron Knuckles can appear very early on. It also means you have to approach some enemies differently to how you would in Ocarina of Time.

In fact, the range of enemies that this mod features are clearly the most difficult and/or annoying ones from the original game. Wallmasters, those annoying electric jellyfish — even that pain-in-the-arse mini-boss from the Kakariko Village well — all show up here.

To makes matters even more challenging, it can take a while before you get hold of a shield. Thankfully, it’s not left to random chance and you can buy one for 60 rupees. That said, cash is rarely in frequent supply — it actually took me until the tenth day to get my hands on the shield.

There are no guarantees when it comes to unlocking items or equipment during the 30 days. It’s all left to chance. For example, I unlocked fire arrows at one point, but never actually got a bow or magic power with which to use them.

Similarly, the shop located in the rest area only stocks a limited range of items, which may or may not be useful depending on what other equipment you have.

The randomness makes for an interesting experience, but Star Fox 64: Survival also impresses with its scale.

Whereas Ocarina of Time would typically throw only a handful of enemies at you at any one time, this mod goes all in. Fighting five Lizalfos at the same time feels epic. On the other hand, battling multiple Wallmasters while fending off Keese from overhead can be very frustrating.

Thankfully, it’s not too gruelling. Defeated enemies will occasionally drop health pick-ups. And in the event you do die, you restart from the beginning of the current day (rather than going back to the very first day).

There’s also a new game plus mode after beating the mod, should you want an even greater challenge.

Although relatively small, the main battle area is an awkward environment that makes combat that little bit tougher.

Very little of it is actually flat. As a result, you’re pretty much always fighting enemies at an angle, which makes hitting weak spots more difficult. It also affects the travel distance of your lunge attack.

There are two sub-areas that are especially tricky to do battle in. There’s a frozen pond, and trying to effectively battle multiple enemies while slip-sliding all over the place is far from ideal.

The most frustrating section is pool of lava with raised platforms. It’s all too easy for annoying enemies to knock you into the lava, piling on additional damage in the process. It can prove incredibly arduous if you don’t have any decent ranged weapons to pick off enemies guarding the platforms.

To play this mod on an original N64 console, you need:

You can download the Star Fox 64: Survival patch at ROMhacking.net. You then need to apply this patch to the ROM using patcher software, such as Floating IPS. Open your patcher, select the relevant files, and hit apply to create a patched ROM.

Now put the patched ROM onto your flashcart’s SD card and you’re good to go!

Because all the enemies spawn in the same open area, the mod can experience an awful lot of slowdown at times. In fact, the game will freeze up for a few seconds or even crash in some instances.

To get around these sluggish moments, it’s best not to run into a large group of enemies. Instead, try to pick off individual opponents first to reduce the overall enemy count.

Also, you really need to be careful when using Deku nuts. On a few occasions, I used one on a large group of enemies and ended up crashing the game.

It’s definitely worth saving your game at the beginning of each day as a precaution.

Aside from these issues, Star Fox 64: Survival is fully playable on original hardware and you can definitely reach the end. Although my game did crash during the final cutscene.

What do you think of Star Fox 64: Survival?