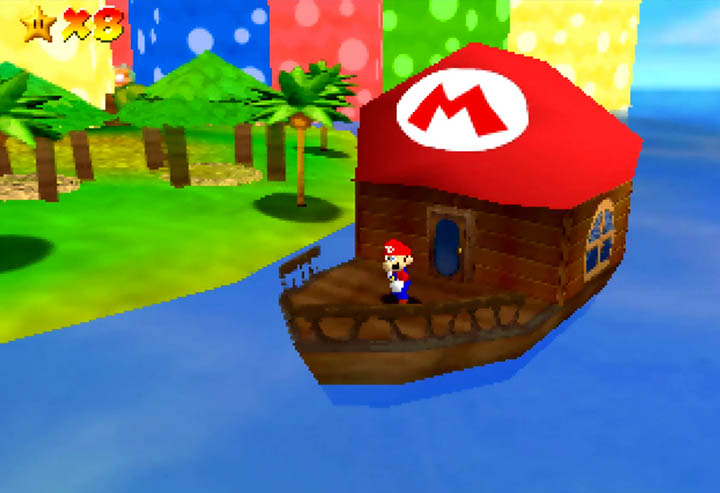 Created by Kaze Emanuar, Return to Yoshi’s Island 64 is a completely new game that promises 165 stars to collect when it releases in 2022.

For now, Kaze has released a playable demo, featuring three worlds, a bonus area, and 23 stars to find.

Although it only gives a glimpse of what to expect from the final game, it’s clear that Return to Yoshi’s Island 64 is already shaping up to be a fantastic mod. The quality on offer here is truly astonishing.

Kaze is no stranger to Super Mario 64 modding, having consistently taken the scene to new heights over the past few years. In this new mod, they’ve delivered the full works: entirely new worlds, extra gameplay features, enhanced graphics, and even quality of life improvements.

The Return to Yoshi’s Island 64 demo is fully playable on an original N64 console — provided you have the right equipment. I’ve included instructions on how to play it within this article.

So what makes this such a great mod? Let’s take a closer look.

What’s Return to Yoshi’s Island 64 about?

In a move that’ll surprise no one, Bowser is once again up to his old tricks. He’s kidnapped (nearly) all the Yoshis and plans to put them to work.

Playing as the portly plumber, it’s up to you to save them. As was the case in Super Mario 64, you have to collect power stars to unlock new levels and progress.

Despite the game’s title, all the locations in this mod are entirely new. And at its core, it still plays and feels very much like Super Mario 64, albeit with some noticeable enhancements.

As with any good Super Mario game or mod, there’s plenty of nostalgia on offer here. It’s also incredibly well written — the characters you meet throughout the adventure are bursting with charm and personality.

The Return to Yoshi’s Island 64 demo includes three new and original worlds to explore. They all feel unique in their own right and are an absolute joy to play.

Bunnybrush Woods is the mod’s opening level. It’s a simple, but beautifully crafted start to the mod — and serves as the perfect intro. It’s full of little, delightful touches clearly designed to put a smile on your face.

By comparison, All Alone Bubbledome is a tougher and far less forgiving experience. This large underwater world still offers a lot of on-foot action thanks to an ingenious new airlock system. You can also travel around quickly using shells, which behave like underwater scooters.

And if you’re into spelunking then you’ll love the large cave network that is Rainbow Grotto. It even has its own minecart mini-game!

All these new locations, features and activities make Return to Yoshi’s Island 64 feel like a completely fresh experience. It’s a mod that seasoned Super Mario 64 players will get a real kick out of.

Each world offers a good mix of exploration, platforming, and mini-challenges or boss battles. The red and 100 coin challenges also make a return.

As you collect stars, new events will sometimes unfold. For example, during one particular star mission in Rainbow Grotto, you meet a non-playable character. After completing it, they’ll then reappear in the next mission to help you get to a previously unreachable area. This gives the game a nice sense of progression, while also keeping things interesting.

As in Super Mario 64, Return to Yoshi’s Island 64 has bonus areas and secrets to discover. Kaze has added some novel challenges here that are unlike anything in the original game. It will be great to see else what the final version of this mod will have.

A custom soundtrack complements the game’s new locations. Some background music is taken from other games and media. For example, Bunnybrush Woods has the Amazon theme from the DuckTales video game — it’s amazing just how well this music suits the world.

Return to Yoshi’s Island 64 offers a nice graphical boost over the base version of Super Mario 64. Although it’s worth noting that it requires the N64 Expansion Pak to do this.

In this mod, the environments and character models sport considerably more detail. Coins have been given a makeover, making them look closer to how they do in later Super Mario games. And in a couple of areas, there are even full reflections.

It looks really impressive, and manages to do this while generally maintaining a consistent frame rate. There are occasional dips here and there, but they’re never so bad that they disrupt the gameplay.

Of course, this is just a pre-release demo, and so Kaze may be planning to make further optimisations. Nevertheless, it already runs so well as it is.

New ways to power up

The Return to Yoshi’s Island demo includes some of the new power-ups that will feature in the final game.

First found in All Alone Bubbledome, the bomb cap gives Mario the ability to throw up to five Bob-ombs.

In the demo, it’s especially useful for destroying blocks while underwater. I’m looking forward to seeing how else it will be used in the final game, as it could also come in handy while fighting enemies.

This suit helps you reach far away places — both vertically and horizontally.

Deploying a cloud is dead simple — just press A while in the air and one will appear (on which Mario will land).

However, much like in the original game, Mario can only create up to three clouds per power-up. So you’d better use them sparingly!

Super Mario 64 has some iconic boss encounters. So it’s nice to see Return to Yoshi’s Island 64 offering completely new face-offs of its own.

Both fights are unique, and not just simple rehashes of existing Super Mario 64 bosses (as can sometimes be the case in other mods).

In particular, the Piranha Plant boss is a real treat — it feels like something straight out of Super Mario Galaxy.

Return to Yoshi’s Island 64 includes a number of changes and tweaks that make for a smoother and more enjoyable experience.

In this mod, the C buttons provide a more granular level of control over the camera. C-up and C-down tilt the camera, and you can even switch to a top-down view — ideal for finicky platforming sections.

You can still zoom in and look around by pressing the L button.

The camera is also a lot more helpful when clinging to ropes or poles. It will automatically turn with the direction Mario is facing, making it much easier to line up jumps.

The first time you enter a game world, you’ll be treated to an overview cutscene showing you all the key locations.

It’s by no means a game changer, but it’s just another thing that boosts the mod’s overall production value.

There’s nothing worse than making your way through the majority of a level only to die and have to start all over.

Checkpoints do appear occasionally in Super Mario 64, but they’re much more frequent here. If you enter a boss battle or separate area within a level, you’ll usually receive one.

At no point while playing the demo did I feel that these checkpoints took away from the challenge. If anything, they enable you to get back to the tougher bits more quickly.

Mario now has an extra move in his repertoire, which you may need for some of the trickier platforming segments.

Jump in the air, initiate a ground pound but then press B immediately. If done correctly, Mario will surge forward through the air and cover a good distance.

It’s an excellent, if shorter alternative to the long jump, and you can even use the two moves in unison.

How can I play the Return to Yoshi’s Island 64 demo?

To play this mod on an original N64 console, you need:

You can get the Return to Yoshi’s Island 64 patch by following the download link in the video description of the demo’s release trailer.

You then need to apply the patch to the Super Mario 64 ROM using patcher software. Use Floating IPS or the Hack64 web patcher to do this.

Just follow the step-by-step process in either of these patchers to create a patched ROM.

Then take this newly created file and put it on your EverDrive 64’s SD card. Boot it up on your N64 and you’re good to go!

What do you think of Return to Yoshi’s Island 64?

I think this mod is shaping up to be something really special, and I can’t wait to play the final version.