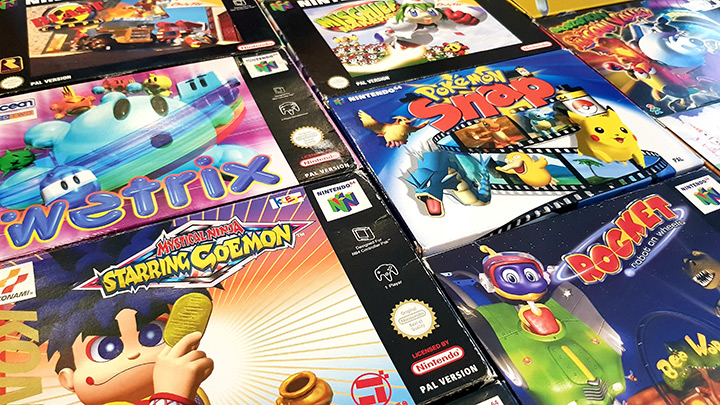 Back in 1996, the N64 ushered in a new era of 3D gaming. It was an experimental time for game developers, who now had the hardware to try out new ideas.

Many classic, yet strictly 2D games up until this point were reimagined to work in full 3D — Super Mario 64 being one of the most famous examples.

Many of these titles were early predecessors to the games of today. As a result, they can seem a tad basic or primitive now.

But there are still some N64 games that stand out for their creativity. They employ unusual or uncommon features, or just offer a very unique experience.

With that in mind, I’ve put together a list of what I think are the most creative N64 games. If you’re looking to try something a little different, you should definitely check out these games.

Even today, racing platformer games are very uncommon. But back in 1998, Iggy’s Reckin’ Balls was unlike anything else on N64.

Playing as a bizarre ball-shaped character, you race against other players through a number of tower stages. You use a grappling hook to climb, and can attack other players in the stage.

The game includes a four-player mode. So if you’re looking for something different to try with your friends, this may be worth giving a go.

Just be warned that Iggy’s Reckin’ Balls is rather clunky to play. In fact, making just one mistake can be enough to lose you the entire race.

Set in Feudal Japan, Mystical Ninja Starring Goemon follows the exploits of a blue-haired ninja and his friends.

They’re on an important quest to…stop Japan from being turned into a westernized arts theatre!? Oh, and there are robots, bazookas and even cameras.

If you’re thoroughly confused then you should be. Mystical Ninja Starring Goemon is an inherently Japanese game with a deliberately wacky, anachronistic premise.

At its core, it’s an action-adventure game with plenty of platforming, mini-games and town exploration. Occasionally, you’ll need to assume control of Impact, Goemon’s giant robot friend, and engage in Megazord-esque battles.

Charming anime-style visuals give this game plenty of character, as does the humour — even if the localisation doesn’t quite get it right at times.

This Tetris spin-off is a wild departure from the famous block-dropping puzzle game we all love and know.

The goal is simple: get to the middle of sphere crafted out of tetrominos and rescue a robot character. However, that’s easier said than done, and this is one of those games you simply need to try in order to “get it.”

You keep doing this until you’ve removed all the layers and have created a big enough hole for the robot to escape.

A fantastic techno soundtrack accompanies the on-screen action. Definitely make sure you wear headphones while playing this.

The tried-and-tested 2D platformer genre is not where you’d typically expect to find one of the most creative N64 games.

Nevertheless, Mischief Makers delivers such a charming and offbeat experience.

Playing as Ultra-InterGalactic-Cybot G Marina Liteyears, you must use your special shake, shake grab ability to work your way through each level.

You can use this power to fight enemies, but also to manipulate objects in the game world. For example, at one point you take control of a giant robot and smash your way through a level.

You’ll certainly need to wear your thinking cap when it comes to some of the game’s puzzles — not to mention do lots of shaking.

Glover is by far the most off-the-wall experience on this list.

Playing as a glove (yes, really), it’s up to you to guide a ball through multiple stages. You can roll, bounce, throw, slap and do a load of other things to move the ball.

As you can imagine, this makes for a challenging (and rather clunky) game at times. So you’ll need a lot a patience to get through this.

The game is set in a fantasy world, giving it a lot of charm and some fun, themed worlds to explore.

Wetrix is an incredibly novel puzzle game in which you terraform a section of land to create lakes of water. You then guide meteors into the lakes to evaporate them and score points.

It makes absolutely no sense, but it nevertheless works as a concept. It’s also incredibly addictive, once you get the hang of the unusual gameplay.

Sadly, this incredibly creative platformer from Sucker Punch Productions slipped under the radar of most N64 gamers in 1999.

Despite it being relatively unknown, Rocket: Robot on Wheels is a fantastic game that rivals even Super Mario 64 and Banjo-Kazooie at times.

The gameplay challenges and puzzles revolve around the game’s excellent physics engine. Rolling balls, throwing objects and using momentum and gravity are just some of the things you need to do to get through this game.

On a technical level, it’s really impressive for the N64. But it’s the creative gameplay that makes Rocket: Robot on Wheels truly stand out.

Go on safari and capture Pokémon in a completely different way in this wonderfully creative N64 game.

Pokémon Snap plays like an on-rails shooter — although without any of the violence thankfully. As you travel around an island in a buggy, you come across multiple Pokémon just waiting to have their picture taken.

However, it’s actually more complicated than that. Some Pokémon have to be coaxed out of hiding or made to evolve using bait and other items.

You can then present your best snaps to Professor Oak, who will score them on a number of criteria.

Even if you’re not a Pokémon fan, this is a really novel experience that every N64 owner should at least try.

Trying to explain what sort of game Space Station Silicon Valley is proves just how unique it is.

You play as a microchip trapped in a futuristic zoo. It’s up to you to take control of the robotic animals that live there to complete challenges and escape.

The game plays like a 3D platformer, and the animal-hopping feature is similar to how Mario can possess enemies in Super Mario Odyssey for the Nintendo Switch.

Each level has objectives for you to complete, and some of these require rather creative solutions. This makes for a very rewarding experience.

It’s ironic that one of the most creative N64 games also happens to be one of its most destructive.

In Blast Corps, you’re part of a demolition crew tasked with clearing the path for a runaway nuclear missile carrier. You can imagine what might happen should it crash into anything.

Using a range of vehicles at your disposal — some of which are just plain wacky and downright impractical — you have to blow up everything standing in the carrier’s way. There are puzzles to solve and plenty of collectibles to find along the way too.

If you’re looking for a truly unique experience on your N64, then Blast Corps is a great choice — even if it is a bit hard at times.

Looking for more N64 games you may not have played?

If you like the titles in this most creative N64 games list then you should also check out my list of the 20 most underrated N64 games.