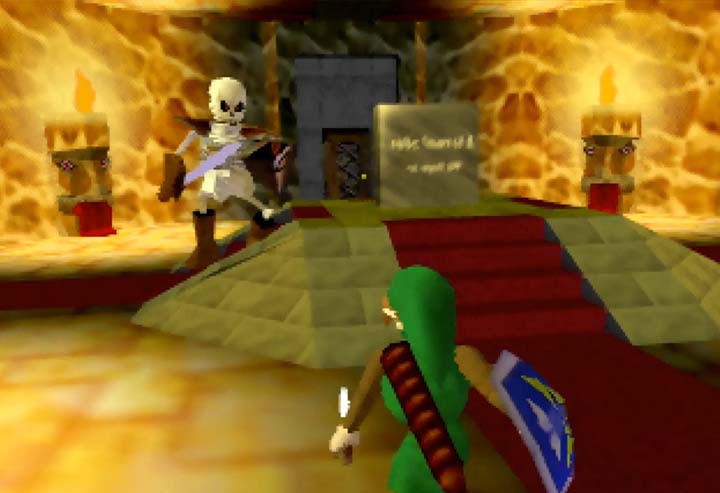 Last month, leakers released a bundle of N64 source code, files and assets online. Included in these files was beta data for The Legend of Zelda: Ocarina of Time, including unused character and item models.

It’s provided yet another glimpse into what Ocarina of Time – then Zelda 64 – once looked like during its development.

And now thanks to the efforts of a clever N64 modder, you can experience a Zelda 64 Beta dungeon demo on your N64 console.

Created by z64me, the Zelda 64 Beta dungeon demo is a reconstructed prototype of Ganon’s Tower. It includes beta characters, items and environmental object assets – and it’s a real blast from the past!

It’s worth setting expectations by saying that this demo is very short.

Nevertheless, you’ll love this if you spent years fawning over screenshots of beta footage in the lead-up to Ocarina of Time’s release. There are some really neat changes to see here.

For example, Link’s design is quite different from how he appears in the final game. His tunic has brown sleeves and his hair is darker too.

He’s also equipped with a generic sword and a shield sporting a less ornate design than that of the Hylian shield.

There’s no HUD or health bar in the Zelda 64 Beta demo. You can Z-target to lock onto enemies, but there’s no on-screen marker. Thankfully, Link has unlimited health, so no need to worry about how many hearts you have.

One of the most exciting inclusions is a different jump attack for Link. By pressing forward and A while targeting an enemy, you’ll perform a somersault slash.

Unfortunately, there aren’t any other items for you to try. You can at least activate the first-person view.

There are only a handful of rooms and corridors to explore. Waiting within are beta versions of Keese, Stalfos, Moblins, Floormasters and Darknuts all itching to fight you.

Stone statues, which looks somewhat reminiscent of Mo’ai heads, decorate many rooms. Bizarrely, they have tongues sticking out – quite a departure from the final version of Ganon’s Tower!

It’s important to go through the right door in order to advance. Otherwise, you’ll loop back on yourself and potentially end up at the very start.

On the plus side, there’s a neat transition animation (that looks straight out of Banjo-Kazooie) when this does happen. Was this originally going to be included in the game?

Upon reaching the top of the tower, a message appears thanking the leaker(s) who released the Zelda 64 beta content. And that’s also the end of the demo.

You will need a flashcart, such as an EverDrive 64, to play the Zelda 64 Beta demo on your N64 console.

The .7z compressed file that downloads includes a pre-patched .z64 file. Just put this file on your flashcart’s SD card and you’ll be ready to play.

A link to the past

The Zelda 64 Beta dungeon demo may be very short, but it’s a great way to go back and experience The Legend of Zelda: Ocarina of Time in its prototype form.

Fancy more new Zelda 64 experiences on your N64? Then you may want to check out the following Ocarina of Time mods. They’re all console compatible.

Zelda 64: Dawn & Dusk is an unofficial 64DD expansion pack, which runs on both an original N64 and the 64DD add-on.

And if you’re looking for something completely different, check out the demo for the gothic-themed Dark Hyrule Fantasy.