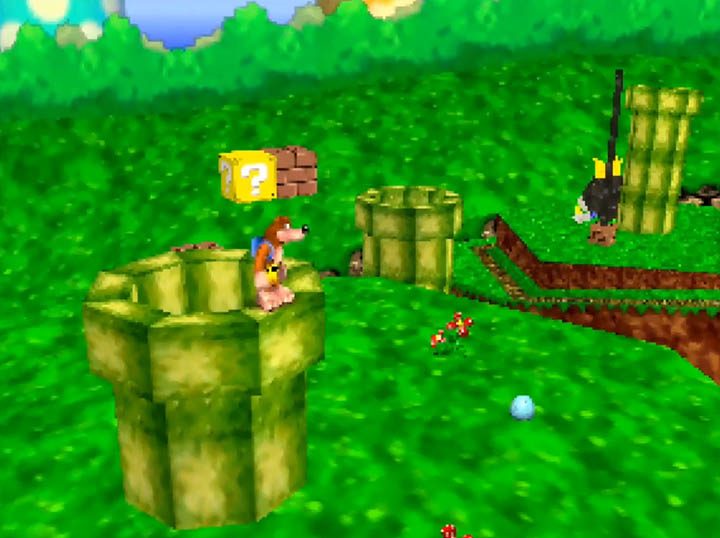 Stay home, save lives. As the world struggles with COVID-19, this simple advice is the best thing many of us can do.

This new mod merges Banjo-Kazooie with other N64 games, including Super Mario 64, Donkey Kong 64 and Bomberman 64. It’s one hell of a nostalgia trip.

Kurko plans to release more worlds in future. It’ll be interesting to see what other N64 games make an appearance.

Banjo-Kazooie: Stay at Home works on an original N64 console. You’ll find instructions in this article on how to get it to run on your system.

You may recognise some of Kurko’ previous N64 work. They created the beautiful Legend of Banjo-Kazooie: The Bear Waker and the Banjo-Kazooie X Donkey Kong Country mods.

More recently, they released their epic Zelda crossover mod, The Legend of Banjo-Kazooie: The Jiggies of Time.

Banjo-Kazooie: Stay At Home is a Banjo-Kazooie game at its core. It plays almost identically to the original game. That said, there are a couple of notable differences.

For starters, there’s a new collectable item. Instead of collecting honey to replenish your health, you now pick up toilet rolls. It’s a not-so-subtle dig at all the stupid people who felt it necessary to panic-buy toilet paper during the current pandemic.

There’s also a variant of the Shrapnel aquatic mine enemy, designed to look a bit like Covid-19. Banjo had best wash his hands after encountering these guys!

Banjo-Kazooie: Stay At Home’s worlds are taken from other N64 games. While the layout remain very similar, many of the features are different.

For example, Bob-omb Battlefield bears little resemblance to its original incarnation beyond its layout. In fact, the world’s starting point is mostly underwater.

It strikes a great balance between familiar and brand new. That said, all the other levels remain closer to their original look and feel. (And that’s by no means a bad thing.)

This mod is overflowing with Nintendo references for you to discover. It’s a real nostalgia overload, and one that makes exploring every nook and cranny really worthwhile.

A superbly blended soundtrack tops it all off. The classic N64 tunes we all know and love have been “Banjo-Kazooified” and they sound fantastic.

True to the Banjo-Kazooie gameplay format, you traverse these worlds in search of Jiggies, musical notes and honeycombs.

The challenges are bespoke, so don’t expect your knowledge of the original N64 games these levels come from to help here.

Unlike some previous mods, Banjo-Kazooie: Stay At Home thankfully doesn’t require you to learn the eponymous duo’s moveset through in-game training.

Unsurprisingly, this mod is aimed at veteran Banjo-Kazooie players.

Reaching some objects requires precise platforming. There are time challenges with little margin for error. And you really have to pay attention to your surroundings to find absolutely everything.

They work well, and in some instances are devilishly tricky. Getting all the secrets in these areas is no small feat.

How can I play Banjo-Kazooie: Stay At Home on my N64 console?

You’ll also need to find an NTSC ROM of Banjo-Kazooie. Make sure this ROM is version 1.0.

The mod comes in the form of an xdelta patch. Use Delta Patcher to apply the patch to the ROM. Just follow the program’s straightforward instructions to create a patched ROM in no time at all.

To play Banjo-Kazooie: Stay At Home on an N64 console, you need to use a flashcart such as an EverDrive 64. Just put the patched ROM on your EverDrive 64’s SD card and it should work.

I’ve tested the game on real N64 hardware, and it runs well for the most part. There are some minor graphical glitches and the Blue Resort world has some noticeable slowdown in parts. But these issues are relatively minor and shouldn’t impact your overall enjoyment.

Banjo-Kazooie: Stay At Home is the perfect bundle of crossover N64 fun for these challenging times. As with all of Kurko Mods, the quality here is really high – I especially love all the delightful little Nintendo references.