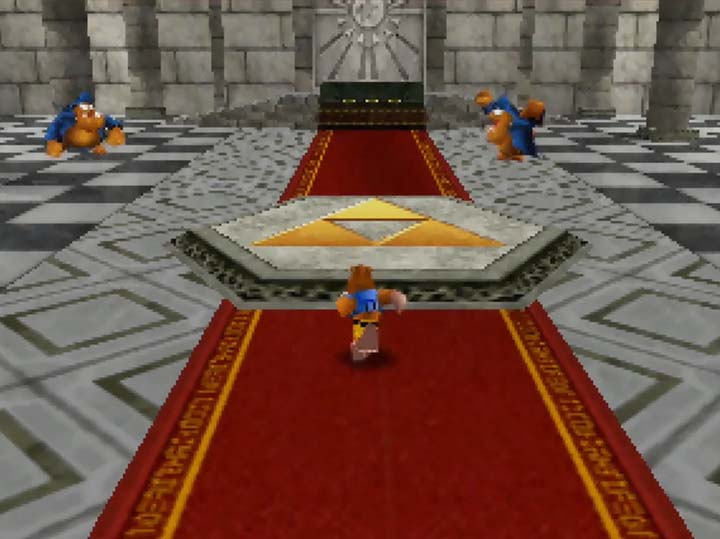 Are you a fan of The Legend of Zelda? Do you have a penchant for Rare’s lovable, yet forgotten bear ‘n’ bird duo?

If your answer to both of these questions is yes then you are going to adore The Legend of Banjo-Kazooie: The Jiggies of Time.

This N64 mod merges Banjo-Kazooie with The Legend of Zelda: Ocarina of Time to create a brand new adventure you can play on your N64. And it’s absolutely fantastic.

But it’s fair to say that Jiggies of Time is in a completely different league to these past projects.

Kurko has been working on this mod for the past five years. It’s a full-length game that contains nine worlds with 100 Jiggies, 900 musical notes, and a ton of Easter eggs to find.

To call Jiggies of Time a labour of love just wouldn’t do it justice. This is a staggering achievement in N64 modding, and without doubt the best N64 mod to date.

Thankfully, it’s fully playable on an original N64 console, and I’ve included instructions on how you can do this within the article.

The Hyrule you know and love, but different

At its core, The Legend of Banjo-Kazooie: The Jiggies of Time is still a Banjo-Kazooie game. It plays just like the bear ‘n’ bird’s original N64 adventure, but set in Ocarina of Time’s world.

Something has gone wrong in the land of Hyrule. The wicked witch Gruntilda has somehow sidelined Ganondorf and decided to take the kingdom for herself. Young Link apparently isn’t up to the task of giving her the boot, and so the responsibility falls to Banjo and Kazooie.

Kurko has done a fantastic job of merging the two universes together. The world of Ocarina of Time is lovingly recreated, managing to feel both familiar and fresh at the same time.

Classic locations, such as Kokiri Forest, Kakariko Village and Death Mountain are instantly recognisable by their layout. That said, they’re not one-to-one replicas – and rightly so.

Everything is decorated and styled to look like the world of Banjo-Kazooie. Even the enemies are re-skinned to resemble classic Zelda creatures. Not only that, but Kurko has used creative licence to slightly alter or outright expand areas with new features.

As a result, Jiggies of Time feels very much like its own game, rather than an awkward retread through an already well-trodden world. It really strikes a perfect balance.

Kurko has stuffed the game full of Nintendo and Rare references.

Everywhere you go, you’ll stumble upon classic game boxes and other Easter eggs that’ll make you smile. The amount of effort that has gone into some of these is truly astonishing.

A wonderful, beautifully crafted soundtrack complements this delightful mish-mash of an adventure.

Music from Ocarina of Time and other Zelda games has been “Banjo-Kazooified”, incorporating the whimsical xylophone, banjo and horn sounds of the franchise. It somehow manages to be doubly nostalgic as a result.

Dialogue is true to the characters, with plenty of sarcasm and self-deprecating humour throughout.

The legend of collecting stuff

You progress through The Jiggies of Time’s locations in more or less the same order as Ocarina of Time. However, it’s important to note that this isn’t just the same game, but with Banjo and Kazooie instead of Link.

Rather, it’s very much like the original Banjo-Kazooie. You travel across nine worlds – self-contained levels, each containing 10 Jiggies, five Jinjos, two honeycomb pieces and 100 musical notes for you to collect.

These worlds are often an amalgamation of multiple areas from Ocarina of Time. For example, the Death Mountain world features the mountain trail, Dodongo’s Cavern, Goron City and an additional area to explore.

To advance from one world to the next, you’ll need to collect enough Jiggies and notes along the way.

You don’t need an intimate knowledge of Ocarina of Time, but being familiar with the game will help in some instances.

Kurko has included Zelda-themed Mumbo transformations, so it’s important to collect tokens for those too.

Hyrule Field serves as the game’s hub world, where you can unlock all the main worlds. It has its own sub-areas for you to explore, such as Lon Lon Ranch, as well as 10 Jiggies to find.

As nostalgic as Hyrule Field may be, it can get a tad repetitive having to constantly traipse back and forth across it. Thankfully, Kurko has introduced a fast-travel system (which you have to unlock).

However, there are some requirements you must meet before you can access a world through this handy system. Firstly, you need to have enough Jiggies and musical notes. You then have to find that world’s hidden portrait somewhere within the game to actually unlock it.

It’s a good setup. Having fast travel is a blessing, especially as you always start the game in the same location each time. But it’s also nice that doesn’t devalue the exploration for which Banjo-Kazooie is known.

The Legend of Zelda: Ocarina of Time impressed players with its day and night cycle in 1998. Jiggies of Time also manages to incorporate this feature – to some extent.

In this mod, time doesn’t flow as such. Instead, you can switch between day and night by using a special platform. Switching to nighttime in Hyrule Field opens up sections of the map that are inaccessible during the day.

It’s a neat touch, and one that makes Hyrule Field a little bit more dynamic.

Jiggies of Time is a refreshingly challenging experience in terms of gameplay. Kurko has implemented new ideas (clearly inspired by Zelda in some cases) that shake up the traditional Banjo-Kazooie formula.

For one, this mod really tests your attention to detail. You have to be especially eagle-eyed if you want to find every single collectible item in the game.

The Forest Temple world is a particular highlight in this regard. In order to collect everything in this world, you need to find clues to solve unusual puzzles.

Not only that, but it even tasks you with learning an entirely new alphabet, which you then need to use to decipher coded messages throughout the temple.

This cerebral style of level design is unlike anything seen in the original N64 games. It breathes new life in the Banjo-Kazooie experience, and I personally enjoyed the novel touch of having to take pen-and-paper notes.

If this has got you thinking that the mod might be too tricky, don’t worry – there’s help at hand. As in the original Banjo-Kazooie, Brentilda appears in each world, offering up to three clues about how to progress.

On a much grander scale there’s also the Bottles Museum. This new feature lets you unlock clues hinting at the whereabouts of secret locations (provided you have enough musical notes).

The clues are helpful without being super obvious, meaning you won’t be missing out on a challenge by calling upon them.

You’ll also need to demonstrate great platforming skills throughout the game. Jiggies of Time features some truly perilous platforming sections – and this is where the game really shines.

That said, the game can be a bit too unforgiving at times.

For example, Death Mountain is a fantastic recreation of the original locale. But it’s incredibly easy to die instantly in parts – so much so that the game’s dialogue even jokes about it.

On top of this, Jiggies of Time (understandably) features the same limitation as the original game where you’ll lose any musical notes you’ve collected in a world if you die.

As frustrating as these moments can be, they’re thankfully far and few between.

Some of the challenges and puzzles that were in the original game make an appearance too. However, they’ve been reworked in most cases to feel fresh and different.

I was particularly impressed with how Kurko revised the Croctus mini-game (the one where you shoot eggs into the mouths of golden crocodile statues).

How can I play The Legend of Banjo-Kazooie: The Jiggies of Time?

You can play this mod on either an original N64 console or PC emulator.

How to play on console

Before you begin, you’ll need a copy of an NTSC ROM of the original Banjo-Kazooie. Make sure your ROM is version 1.0 of the game.

You’ll also need a flashcart, such as an EverDrive 64, to play Jiggies of Time on your N64 console.

Go to this video on the Kurko Mods YouTube channel and follow the download link in the description to download the mod. This mod comes in the form of a xdelta patch, which you need to apply to the Banjo-Kazooie ROM.

To apply the xdelta patch, you’ll need Delta Patcher. Download the application and open it (no installation required).

In Delta Patcher, select your Banjo-Kazooie N64 ROM in the “Original file” field and the Jiggies of Time patch in “xdelta patch”. Then hit “Apply patch” – the original file will now be patched.

4. Put the patched ROM on your flashcart

Copy the patched ROM file and paste onto your flashcart’s SD card.

Boot up your N64, select Jiggies of Time from the flashcart menu and start your adventure.

How does the mod perform on an N64 console?

The Legend of Banjo-Kazooie: The Jiggies of Time is fully playable on an original N64 console.

In especially large areas you may notice some slowdown, but never to the point that the game is unplayable. There are also some slight graphical glitches in parts.

For a couple of the in-game challenges, you’ll need to refer to a map or clue that appears within the game world. These can be very small in size and difficult to decipher, especially when played on a modern TV.

If possible, play the game on a small- to medium-sized CRT TV for the best results.

I fully tested a pre-release version of the game and did not come across any game-breaking issues.

How to play on PC (emulator)

Follow steps 1–3 under the “How to play on console” section to create a patched Jiggies of Time ROM. You can then use this ROM in your N64 emulator software.

Kurko has 100% tested Jiggies of Time in Project64, using the following configuration. This will prevent some graphical problems from occurring.

2. Make sure you don’t have advanced settings hidden

Go to Options –> Settings –> Hide advanced settings and ensure the box is unchecked.

Go to Options –> Configure Graphics Plugin –> Advanced –> Force alpha blending and check the box for it.

Will you be playing this mod?

The Legend of Banjo-Kazooie: The Jiggies of Time is one of the best N64 mods made to date. The quality and attention to detail are simply staggering, and it’s the perfect mod for Banjo-Kazooie veterans and Legend of Zelda fans.