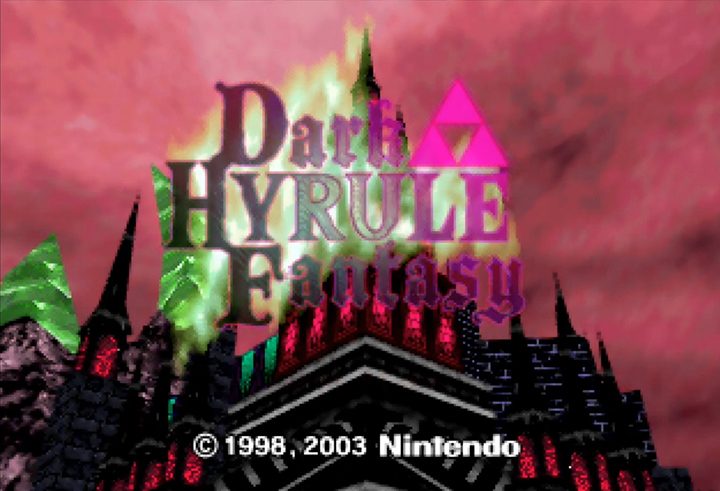 Created by modders E-Gor and Spire, Dark Hyrule Fantasy is a Legend of Zelda: Ocarina of Time mod for N64.

It’s similar to Zelda 64: Dawn & Dusk, in that it uses Ocarina of Time’s game engine, but features an entirely new story and game world.

Dark Hyrule Fantasy is still a work in progress. However, there’s now a short demo that gives you a good idea of what to expect.

E-Gor and Spire haven’t shared how big the final game will be, but they have said it’s definitely not a mini-hack. And given that the demo offers over an hour of gameplay, it’s possible we might end up with a rather meaty adventure.

Best of all, Dark Hyrule Fantasy works on original N64 hardware. I’ve included instructions on how you can play the demo on console in this article.

Dark Hyrule Fantasy is more than just a simple re-skin of Ocarina of Time.

It’s an entirely new world built from the ground up, filled with gothic architecture and creepy forests. Dark colours have been used to create an ominous atmosphere that’s nothing like the original game.

Link swaps his green tunic for a crimson leather jacket. He also uses a curved Killing Edge sword and a bespoke tribunal shield. Dante from Devil May Cry was a clear source of inspiration here.

In my time with the demo, I came across stunning, beautifully designed locations rarely seen in other N64 mods.

Not only that, but Dark Hyrule Fantasy actually feels dark and moody. There’s foreboding, lonely atmosphere that really enthrals you.

Despite the completely different look, Dark Hyrule Fantasy plays and controls just like Ocarina of Time. Link’s abilities remain the same, and there aren’t any new items to use.

In terms of story and lore, the demo doesn’t give much away. However, journals you stumble upon and conversations with villagers give some indication of what to expect.

In the meanwhile, you can discover more through the Dark Hyrule Fantasy website. It includes a growing encyclopedia of world-building resources, and offers a great preview of what’s to come.

This first demo of Dark Hyrule Fantasy gives you the chance to explore some of the game’s Muerti region.

You start off in Villa Muerti, an eerie little town that’s home to a handful of unusual people.

Unlike Ocarina of Time, all the building interiors are rendered in real time. They’re really detailed, making each of Villa Muerti’s houses distinct.

After taking a look around Villa Muerti you head into Candlelight Woods. Here you have to fight your way through Keese, Wolfos and re-skinned Deku Babas.

This open area leads to Nightshade Manor – one of Dark Hyrule Fantasy’s dungeons. But to get there you have to navigate a maze of iron fences. Explore each of the maze’s paths and you may stumble upon secrets and collectibles.

The manor is a sight to behold. This imposing structure dominates your view as you walk up the path towards it.

The devil’s in the detail

From the moment you step inside, it’s clear there are many rooms for you to explore. And progressing through this “dungeon” is anything but linear.

Knowing where to go next isn’t always obvious, and it’s important to remember where doors that require a key are.

Most puzzles are what you would expect. Kill everything in a room, light torches, or find a switch. After all, this is a ROM hack, and so the core gameplay is largely the same as in Ocarina of Time.

That said, Dark Hyrule Fantasy really tests your attention to detail. Rarely is the solution in plain sight.

Objects, switches, and even areas are hidden in novel ways – it’s surprising how often I found myself having to think outside the box. The mod also uses the Hookshot (dubbed the Vineshot) to great effect.

Dark Hyrule Fantasy is by no means tough, but it does present a good enough challenge for veterans of the N64 Zelda games.

How can I play Dark Hyrule Fantasy?

You will also need to find a debug ROM of The Legend of Zelda: Ocarina of Time Master Quest. The file name for this ROM is ZELOOTMA.z64.

You then need to apply the patch to the debug ROM. The easiest way to do this is by using Marc Robledo’s online ROM patcher.

Select the relevant files and click on “Apply Patch”. You may encounter a Checksum error – don’t worry about this. I had this same problem, but the ROM still works perfectly fine.

To play on an original N64 console, you will need a flashcart such as an EverDrive 64. Just put your patched ROM on your flashcart’s SD card and you’ll be ready to play.

I played through the entire demo on an N64 console and didn’t encounter any technical issues.

Weirdly enough, my Dark Hyrule Fantasy ROM already had a save file on it. I get the impression this wasn’t an intentional inclusion, as all items are unlocked by default and Navi no longer gives clues relevant to the demo.

Perhaps a save file already present on my EverDrive 64 is to blame? Regardless, for the proper demo experience you should start a new game file.

However, if you’re curious then this mysterious save file gives you an early look at some of the new weapon and equipment designs. These are presumably intended for the final release.

One thing to note about this save file is that Villa Muerti may be extremely dark. Don’t worry, this isn’t a glitch – the demo just starts off during nighttime for some reason. Just play the Sun Song on Link’s ocarina to correct this.

What do you think of Dark Hyrule Fantasy?