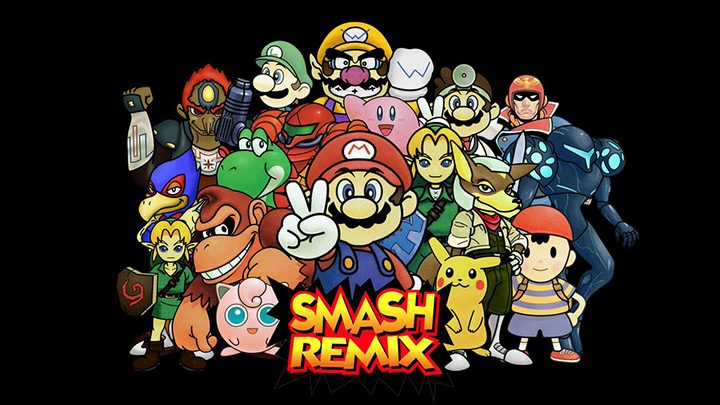 As great as the original Super Smash Bros. was for its time, there’s no denying how limited it is in terms of content.

So it’s just as well a clever team of modders have created Smash Remix – an expansion mod that adds new characters, stages, and greater customisation.

It’s nothing short of pure wizardry. Whereas previous mods merely replaced a character or stage, Smash Remix actually adds content on top of the base game.

And if you’re worried about having to play it on a dodgy emulator, then fear not. You can play Smash Remix on an original N64 console – I’ve included instructions on how to do this in this article.

What does Smash Remix add?

The current version of Smash Remix (0.9.3) adds seven new characters, 53 stages, and many other improvements.

So far, the following characters have been added to the game:

They have all appeared in at least one other Super Smash Bros. game as a playable character.

Most of the new characters are essentially clones of existing ones, with tweaks to make them a bit different. (This is also the case in the official games they appear in.)

However, there are some exceptions. Although originally cloned from Mario, Wario’s standard and special attacks are, in fact, entirely new. Lucas also has his PSI-based standard move set from other Super Smash Bros. games.

The amount of character options on offer is really impressive.

You can choose some fighters’ region-specific character models, such as Ness’ Japanese design that’s ever so slightly different. It’s even possible to play as Metal Mario and Giant Donkey Kong in multiplayer.

You can use all these new characters in Super Smash Bros. 64’s single-player modes. They even each have a unique “Break the Targets” challenge stage. Only Ganondorf and Dark Samus have their own “Board the Platforms” stage for the moment.

It’s important to note that Smash Remix is still a work in progress. The team behind it plan to add more characters in later releases.

Lucas is the latest addition to the cast, and was first introduced as part of version 0.9.3.

So how do each of the characters play? Let’s take a closer look:

Ganondorf is a clone of Captain Falcon. He has similar, albeit tweaked special moves.

His Warlock Punch hits with devastating force. Ganondorf also enters an armour state during the start-up animation for this – only a strong enough attack can interrupt it!

His smash attacks are like the ones he has in Super Smash Bros. Ultimate for Nintendo Switch.

However, rather than using a heavy sword, this Ganondorf wields the trident used by Phantom Ganon in The Legend of Zelda: Ocarina of Time. It really packs a wallop!

Young Link is a smaller, faster version of his adult self.

At the same time, he doesn’t deal as much damage, nor does he launch opponents quite as far.

But he more than makes up for this with his multi-hit sword spin and spiking down-air attack. He can jump both higher and further than Link too.

One of the coolest changes is Young Link’s dash attack. Rather than charge with his sword, he rolls – just like in the N64 Legend of Zelda games!

Unsurprisingly, Falco is very similar to Fox. The most notable difference is his B attack, which is now his Falco Phantasm.

In other Super Smash Bros. games, you perform this move by pressing left/right and B.

However, in the N64 game you can only perform three special moves. (For the moment at least – who knows what future Smash Remix updates will bring!) As a result, the Phantasm replaces Falco’s laser pistol.

It’s a small sacrifice, but one that makes Falco feel more distinctive from Fox.

Dr Mario plays much like he does in Super Smash Bros. Ultimate. He is a slower, but stronger version of Mario.

He swaps fireballs for his signature Megavitamins and even has some different standard moves.

Most notably, his down-air attack is a brutal double-legged stomp. Connect it just right and your opponent will plummet downwards.

Samus’ doppelganger nemesis has bespoke abilities that really make her stand out.

In particular, her down-smash attack is inspired by her non-playable appearance in Super Smash Bros. Brawl. She pounds her cannon into the ground, creating a Phazon-energy burst that launches enemies upwards.

Her forward-air attack is a small cannon burst that’s great for interrupting opponents.

Much like her original counterpart, Dark Samus also has bombs, a charge shot, and her screw attack.

Wario is a completely new character with an entirely bespoke move set.

Many of his standard moves are similar to what he has in other Super Smash Bros. games. For example, he’s quite disruptive in the air.

It’s his special attacks where things differ quite drastically. Presumably, the motorbike and fart attacks he usually has were too complex to add to Smash Remix.

That said, the alternatives Wario has instead are both great fun and nostalgic at the same time.

For example, pressing B unleashes his shoulder charge attack from Wario Land: Super Mario Land 3. He’s invincible during this, making him an unstoppable force.

It’s also extremely effective at getting you back onto the stage.

It was a bitter pill to swallow when Mother 3 was cancelled for the N64 back in the day. So it’s really nice to see Lucas finally get an outing on the console.

As is the case in the official games, Lucas’ special attacks are somewhat similar to Ness’. However, his standard move set is entirely bespoke.

Instead of producing a combo-inducing burning pillar, Lucas’ PK Fire hits once and knocks opponents away. His PK Thunder passes through enemies, capable of multiple hits.

Lucas’ A-button attacks are primarily based around his PSI abilities. His down- and up-smash attacks unleash a heavy bout of energy that sends opponents flying.

He also has his Rope Snake, allowing him to grab enemies from a distance.

A huge number of new stages

Smash Remix has a whopping 62 playable stages as of version 0.9.3. This includes the original nine, as well as most of the stages that were originally unique to the single-player mode.

Even the How to Play demo stage and child’s bedroom from the game’s intro are playable!

Past mods only managed to swap out existing stages for a new one. Smash Remix has overcome that limitation entirely.

To accommodate for this massive number of arenas, the mod introduces a page system on the stage select screen. It’s super simple and intuitive.

While there may be 53 more stages than before, most of them are static in nature. They don’t have bespoke hazards or dynamic features such as moving platforms.

There are a few exceptions though. Big Blue from F-Zero X is set on a fast-moving race track, similar to how it appears in Super Smash Bros. Melee. Fall off a vehicle and you’ll fly off the side of the screen if you’re not quick.

It’s incredibly impressive, and possibly the most advanced Super Smash Bros. 64 stage yet.

Onett from Earthbound has a passing taxi that will damage any players caught in its path. And Smashville has a moving floating platform, which if used creatively can result in some clever KOs.

This arena mimics a basketball court with two downward-facing DK launch barrels at each end. The goal here is to knock opponents into one and launch them off the bottom of the screen.

It’s a great choice for 2 vs. 2 team games, and a stage that’s bound to provide plenty of laughs when played with friends.

To that end, Smash Remix includes the option to turn off hazards. Not only that, but you can also turn off stage movement, meaning platforms will remain static and lava won’t rise.

You can now view damage stats for all players at the end of the game.

Press the A button on the results screen, and you’ll see the total damage dealt and taken for each player. It also shows the highest damage you took in a single stock.

While not as advanced as later Super Smash Bros. games, it’s still a nice touch. It’s especially useful in team games, where you may want to check whether your buddy was pulling their weight.

Smash Remix has an option that makes AI opponents tougher to beat.

The AI still makes silly mistakes from time to time, but they’re certainly more challenging overall. In particular, they seem to be a lot better at racking up combos.

You have many more options when it comes to customising your game. The in-game music options are vastly expanded too, allowing you to have multiple songs per stage.

For example, you can make it so that you have to hold the start button to pause a match. This is ideal if you tend to hit it by mistake during frantic battles.

You can also turn on neutral spawn points and even skip the results screen after a match.

The “Salty Runback” code enables you to get back into the action even quicker.

There’s nothing more frustrating than losing a game to a rival player and having to trawl through all the menus to face them again. You want justice now, damnit!

Hold Start + A + B + Z + R as the match ends with your demise and it’ll start a new one with the same characters and stage. Your opponent won’t even have a second to gloat!

There are also options to help teach you the game. You can highlight characters’ hitboxes, show a combo meter, and add colour overlays to show a character’s current state.

The hitbox feature is especially cool. Not only is it super useful, but the blocky characters have a surprising charm to them.

Lastly, haven’t you always wished Super Smash Bros. 64 had a widescreen mode? Well, now it does – thanks to Smash Remix.

How can I play Smash Remix?

You’ll first need to find and download an NTSC ROM of Super Smash Bros. 64. You need an N64 Expansion Pak to play this mod.

Then go to N64 Vault to download the latest Smash Remix patch. You will need to apply this patch to your Super Smash Bros. 64 ROM.

You can do this by using a program called Delta Patcher. Open it, follow its simple instructions, and you’ll have a playable version of Smash Remix in no time at all.

You’ll need a flashcart such as an EverDrive 64 to play Smash Remix on an original N64 console.

I’ve played many hours of Smash Remix on an original N64 console, and have yet to encounter any bugs or major performance issues.

If you have enjoyed this post, please consider supporting N64 Today through Ko-fi:

If you enjoy N64 Today then please consider supporting the blog by buying me a coffee on Ko-fi.

N64 Today uses cookies to anonymously track visits and measure the performance of this website through Google Analytics and Hotjar.AcceptCookie information