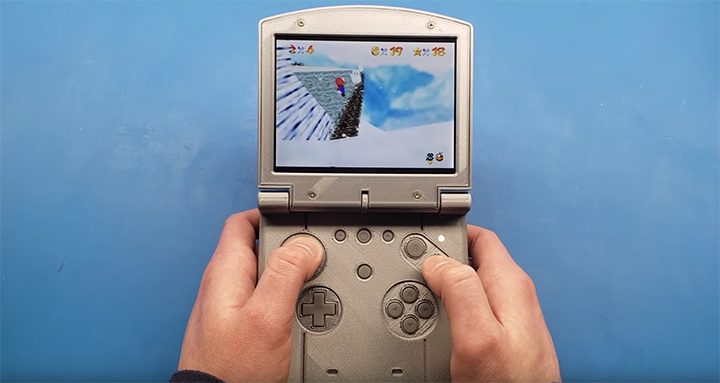 Portable N64 consoles are nothing new – people have been making them for years now. But few have come as close to this latest mod by GmanModz in terms of both design and portability.

The N64 SP – named so because of its resemblance to the Game Advance SP – looks like a dream.

It has a clam-shell design, built-in cartridge slot, and even a rechargeable battery.

The system uses the UltraVGA, a mod based on the UltraHDMI N64 but intended for portables. It gives the console a high-quality video output.

Despite the similarities to the Game Boy Advance, the case is, in fact, 3D printed. A key difference is the base, which is thicker due it housing the cartridge slot. Nevertheless, it’s still a tidy solution.

The N64 SP stands out because it’s a lot smaller than most N64 portable mods.

In the past, modders were limited by how much they could trim down the N64’s internal components to then put in a portable console.

This is because the N64’s PIF (Peripheral InterFace) chip sits at the edge of the N64’s motherboard. This chip interfaces with controllers and cartridge security chips.

But thanks to a recent discovery in the N64 modding community, GmanModz was able to relocate and rewire this elsewhere. The end result is a much smaller and more compact design.

This is such a cool N64 mod, and I really wish I had one! But what do you think?