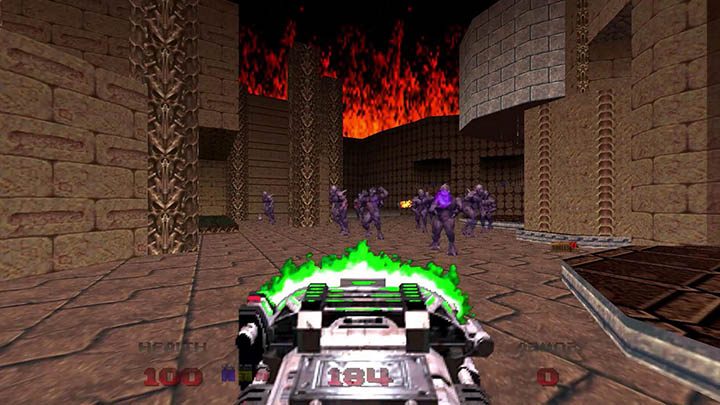 In case you didn’t know, Doom 64 is getting a re-release on modern systems. And according to a recent interview, it’s going to include brand new content alongside other improvements.

The game is being ported to PlayStation 4, Xbox One, Nintendo Switch and PC by Nightdive Studios. (The same studio behind the Turok 1 and 2, and Forsaken remasters.)

Speaking to USGamer, James Haley, senior developer at Nightdive Studios, gave a flavour of what to expect in terms of new content:

“On our end, persistent players will have the opportunity to unlock a new chapter in the Doomguy’s saga, taking place shortly after [Doom 64’s] original campaign concludes. The Mother Demon you defeated in that outing had a sister, and since you’ve been messing up Hell non-stop, she tries to get rid of you by sending you away. If you can make your way back and take revenge, you’ll be rewarded with a bit of lore that fans of both series, new and classic, should enjoy.”

As well as the new chapter, Doom 64 will have high-resolution graphics and run in widescreen.

One of the biggest criticisms of the original N64 game is just how dark it is. By which I mean, literally dark – it’s hard to see anything at times!

To rectify this, Nightdive Studios has included new brightness options. At the same time, they’ve been careful not to change the original game’s lighting, which they say would be “sacrilege.”

You can get Doom 64 as a bonus for pre-ordering new series entry Doom Eternal. Doom 64 will also be available to purchase separately.

Of course, if you’re looking for the most authentic experience, then you could always pick up the N64 original.

As I said in my review, “Doom 64 remains an absolute joy to play 20 years later thanks to its superb, tightly crafted level design and exceptional technical performance.”

It really is a shining example of an N64 game that holds up today.

Will you be getting the Doom 64 re-release?