It proved what a powerful piece of kit the N64 was for its time. And it also gave us an early indication of just how advanced gaming could – and would – become.

But surely there’s no way that Wave Race 64 still impresses today? After all, it’s now over 20 years old and a lot has changed in gaming since then.

The short answer is that it does. Wave Race 64 is not only still very technically competent, it’s also great fun to play.

Wave Race 64 is a jet-ski racing game with a heavy focus on realistic water physics.

And it’s truly astounding just how well the game pulls this off despite its age.

There are nine courses for you to zoom around on your personal watercraft, including sunny beaches, vast lakes, and industrial docks. And in all of these, the water behaves differently.

The single-player Championship mode is where you spend most of your time. It features three difficulty classes for you to beat (and an extra reverse mode).

The goal is to get more points than the other racers. However, they’re the least of your worries compared to the actual waves you have to tackle.

Otherwise, there’s a two-player mode, where you can go head-to-head against a friend on all the courses you have unlocked.

And if you like high-score challenges then you may enjoy the time trial and stunt modes. In fact, Wave Race 64 still has a pretty active speedrun community.

The wave physics are the crowning achievement of this game. Even today, the way the water behaves is remarkably realistic, despite Wave Race 64’s dated graphics.

They’re also what make the game a deep and rewarding challenge.

Each course comes with its own wave patterns. For example, Drake Lake features calm and still water, whereas Marine Fortress has incredibly rocky waves.

At the same time, the water will change over the duration of the race. For example, the tide will go out and the water level of the course will decrease. In some instances this drastically alters a course’s layout, opening up new routes.

The water physics are impressive to the point that they’re almost tangible. You can “feel” the waves as you crash into them and they affect your trajectory.

It’s remarkably complex and is by far the most convincing example of water in an N64 game.

Unfortunately, the international version of Wave Race 64 doesn’t support the Rumble Pak. It’s a shame given it would be a perfect match.

However, the Japanese-only Shindou Edition does, and it’s easily the best way to experience this game.

Wave Race 64 isn’t just about tackling the water. You also have to navigate a set of buoys across each course.

You have to pass each one on the correct side. Every time you do, your jet-ski’s engine power will increase by one (up to maximum of five).

Miss a buoy and you will lose any power you have built up. Miss five in a single race and you will be disqualified.

How these buoys are arranged depends on the difficulty level. On expert, they can be incredibly tight, meaning a good knowledge of the course and some forward planning is important.

Learning the intricacies of each course’s layout and water behaviour is the key to winning. You can ram opponents or cut them up, but without tight jet-skiing skills it won’t help much.

Wave Race 64’s expert mode is especially gruelling. You need to come first in nearly every race, regardless of how well your opponents do.

That’s because the game has a minimum qualifying score for each round of a cup. Even if you perform better than the other racers, you’re not guaranteed a place in the next race.

You’re up against killer waves, awkward buoys and other racers who love getting in the way. And so it’s very easy for something to quickly go wrong and ruin a race.

This wouldn’t be so bad if you could just restart the race. But if you retire, you have to start all over from the very beginning of the championship.

Nevertheless, the game’s upbeat nature means you’ll want to get back on your watercraft again each time.

The in-game commentator is especially encouraging, and the warm and catchy soundtrack certainly has the power to put you in a good mood.

Wave Race 64’s stunt mode is a nice diversion from the main game.

Here, you have to pull off as many tricks as you can while jet-skiing your way through rings for extra points.

There are a load of tricks you can do, giving you plenty of options as you try for a high score.

In fact, if you do a wide enough range of tricks, you may just unlock a hidden secret.

Sadly, Wave Race 64’s multiplayer only supports up to two players. It isn’t surprising given how much this game pushes the N64.

You and another player can compete across all of the courses you have unlocked in the single-player mode.

The same difficulty settings are available, and you can turn on a handicap if you’re after a closer racing experience.

Given how technical Wave Race 64 is, the multiplayer is very much a test of skill. That said, you can always just ram your opponent if that is more your style.

Despite everything the game is trying to do with its water physics, Wave Race 64 runs remarkably well. The frame rate remains consistent throughout the game.

It’s a colourful and vibrant experience, and this helps to make Wave Race 64 feel less old than it actually is.

There’s a wealth of detail to be found in each course. Neat little touches like dolphins swimming in the background or ducks flying overhead add an air of realism.

The course Drake Lake is a real highlight. At first, you’re racing in a heavy fog – you can’t help but think it must be due to the N64’s technical limitations. 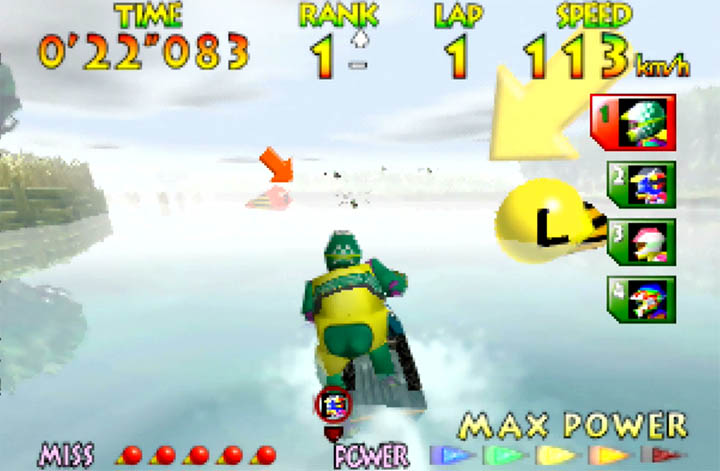 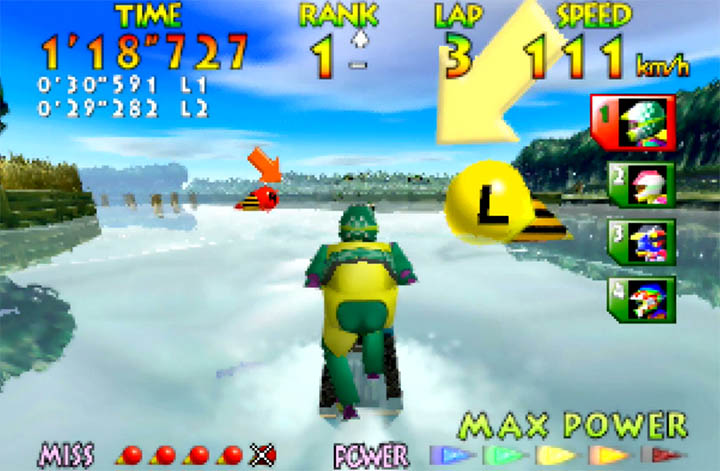 But as you make your way round, the fog starts to dissipate. The sunshine pierces through and, by the third lap, the weather is completely clear. The water even has reflections of the surrounding scenery (although, sadly not of your racer). It’s absolutely stunning.

Wave Race 64’s performance also holds up in splitscreen multiplayer. To achieve this, the game does away with much of its superfluous detail (like the reflections) and advanced lighting.

However, it’s worth it, as it ensures the frame rate remains consistent and relatively high across all courses.

As impressive as the waves may look, the water isn’t as convincing as it once was.

If you stop to really look at it, you’ll notice it has a gloopy quality to it. But as those waves hit you in the heat of the race, you really won’t care.

The colourful visuals also help when playing the game on a modern TV setup.

On a standard N64, Wave Race 64 looks a bit duller and fuzzy on an LCD/LED TV. Nevertheless, it’s clean enough for you to still enjoy the game.

As per always, the best experience is on a CRT TV. It also looks superb on an UltraHDMI N64.

PAL is not your pal

Wave Race 64 wasn’t optimised for the PAL format. As a result, European and Australian versions of the game run at 5/6 of the speed of North American and Japanese copies (NTSC/NTSC-J).

Due to the difference in screen resolutions, the PAL version of Wave Race 64 also has huge black borders around the image.

This doesn’t stop Wave Race 64 from being a good game. But it does tarnish the experience by making the gameplay feel sluggish.

So play the NTSC version if you can. Remember, you’ll need a Japanese or North American N64 console for this.

(Note: Japanese cartridges won’t fit a North American N64 – and vice versa – due to a physical region lock. It’s possible to remove this with an internal console modification.)

This is largely due to the game’s incredible water physics, which still look and feel realistic today.

And while the graphics are understandably dated, there are plenty of little touches and details that help make this an immersive experience.

Never mind that there aren’t that many courses. Each one features its own water behaviour and hazards, meaning they all feel truly unique from one another.

The game delivers this admirably, maintaining a consistent frame rate throughout.

Even the two-player mode runs smoothly, all the while keeping the water physics intact. That said, some of the graphical detail and lighting is reduced or removed in the process.

Wave Race 64’s single-player mode is challenging and, at times, a tad unforgiving. Having to restart an entire Championship can be frustrating. But it’s a minor criticism at best.

Otherwise, avoid the PAL version of the game if you can. It’s still playable, but the slower speed and thick black borders don’t do it justice. 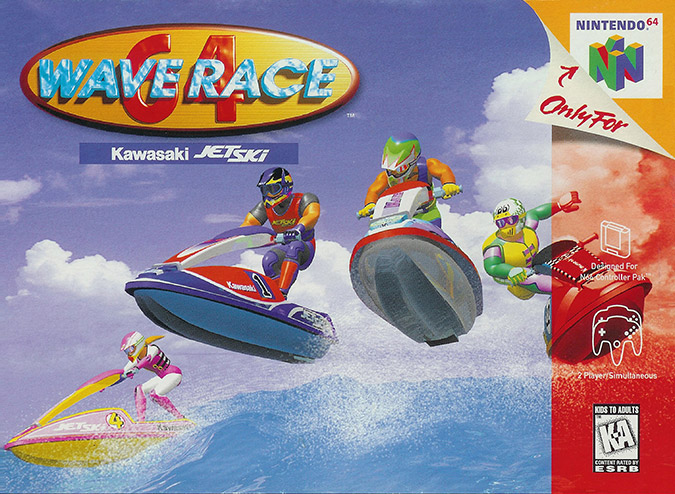