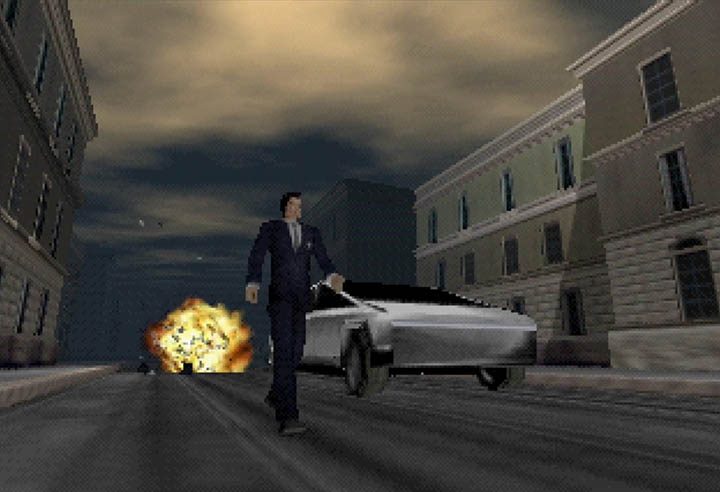 It didn’t take the internet long to point out that the Tesla Cybertruck looks like something from an N64 game.

With its angular design, this upcoming electric vehicle would fit right into the likes of Cruis’n USA or Vigilante 8.

To prove the point, modder Graslu00 has inserted the Cybertruck into GoldenEye 007. Even Elon Musk himself makes an appearance in 64-bit form.

Better yet, you can play the GoldenEye Cybertruck mod on an original N64 console – provided you have the right equipment.

The GoldenEye Cybertruck mod only includes one mission – and a bonus mission of sorts.

The main mission is an altered version of Streets. However, instead of using a tank to blast your way through St. Petersburg, you get to drive the Cybertruck.

Waiting alongside it in the car park near the start is none other than Tesla CEO Elon Musk.

Standing in for Valentin, Musk offers you the oddly shaped vehicle to help you in the battle against fossil fuel emissions. Despite all the internet’s joking, it really does fit with the game’s low-poly setting.

Musk informs you that he’s equipped the Cybertruck with a hidden weapon. Turns out it can fire tank shells – surely that’s not good for the environment!?

Of course, you don’t have to shoot everything. You can dispatch guards simply by running over them. Now there’s a selling point you won’t find listed on Tesla’s website.

As we saw from the Cybertruck’s real-life reveal event, the vehicle is by no means indestructible. Bullets will pass through the so-called armour glass like steel balls.

It doesn’t stand up to enemy rockets either. So drive with care.

The GoldenEye Cybertruck mission isn’t groundbreakingly different. And nor is it meant to be.

It’s just a timely bit of fun, and well worth giving a go if you’re loving all the Cybertruck memes right now.

How can I play the GoldenEye Cybertruck mod?

Visit N64 Vault to download the GoldenEye Cybertruck mod. The mod comes in the form of an xdelta patch.

You need to use Delta Patcher to apply this file to an unmodified NTSC ROM of GoldenEye 007. The ROM file extension should be .z64.

Follow Delta Patcher’s simple file select instructions and you’ll have a patched ROM ready to play in under a minute.

To play the GoldenEye Cybertruck mod on real hardware, you need a flashcart such as an EverDrive 64.

I’ve played through the mod a few times on console and didn’t encounter any noticeable bugs or issues.

Will you be taking the Cybertruck for a spin in GoldenEye 007?