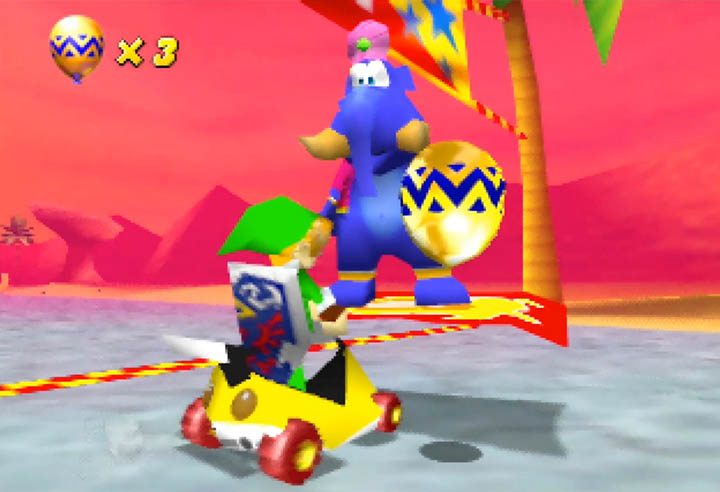 You can now play as Link, from The Legend of Zelda, in Diddy Kong Racing, thanks to the power of N64 modding.

Better yet, it even works on an original N64 console.

Version 1.1 of the mod is available now. There a few technical issues, but it generally runs pretty well.

A Link between worlds

Link’s inclusion comes at the expense of losing T.T from the roster. He shares the same stats, making him one of the best characters in the game.

The mod comes with all characters and tracks already unlocked.

Just like with any other character, you can play as Link in a car, plane or hovercraft. His tunic colour is different for each vehicle – a nice touch!

You can use Link across all modes, including Adventure mode.

Sixty Four has used voice clips for Link from Ocarina of Time. You’ll hear the green-garbed hero yelp and yell as he zooms around the track.

The game’s title music is also different. The Song of Storms from Ocarina of Time replaces Diddy Kong Racing’s kiddy theme in the intro.

Hyrule of the road

Each of these replaces the first track in each of Diddy Kong Racing’s domains.

Therefore, you lose Ancient Lake, Whale Bay, Everfrost Peak and Boulder Canyon. Otherwise, all the other tracks are there, although I couldn’t get Crescent Island to run on console.

The Ocarina of Time tracks are very accurate recreations of their original locations for the most part. Sixty Four has also used the available space wisely to get the most out of each environment.

Dodongo’s Cavern and Lon Lon Ranch are circular tracks thanks to the inherent design.

But in Temple of Time, Sixty Four has added a side corridor. It blends in so well that you might’ve thought it was always there.

Graveyard is a little more complex. This track offers multiple routes, and at first it’s a tad confusing as to where you need to go.

At the same time, having multiple routes does make it a bit more interesting than usual.

Diddy Kong Racing x Ocarina of Time is quite buggy in its current state. It often crashes, and trying to select certain tracks will cause the game to freeze.

You can use all vehicles on each track, except for Graveyard, which only allows the hovercraft.

However, it’s worth noting that planes do not work correctly on Legend of Zelda tracks in version 1.1 of the mod. You’ll be able to play just fine, but the AI gets confused and ends up flying the wrong way or into walls.

Sixty Four is hoping to fix this in version 1.2.

The start/finish line trigger on Graveyard isn’t quite right either. The game thinks you’ve crossed it much sooner than you actually have.

Also, some of the original tracks’ textures are now incorrect. Presumably, this was to accommodate the Legend of Zelda-themed routes.

It’s not a game-breaking issue by any means, but you may find it a little jarring to begin with.

How can I play Diddy Kong Racing x Ocarina of Time?

Head over to N64 Vault to download the Diddy Kong Racing x Ocarina of Time patch.

You will need to apply this patch to an unmodified NTSC ROM of Diddy Kong Racing. The ROM file extension should be .z64.

You can apply the patch using Delta Patcher software. Just run both files through the program and you’ll be good to go!

To play as Link in Diddy Kong Racing on an actual N64 console, you’ll need a flashcart such as an EverDrive 64.

Will you play as Link in Diddy Kong Racing?

Let me know what you think about Diddy Kong Racing x Ocarina of Time on Facebook or Twitter.

If you enjoy N64 Today’s content, please consider buying me a coffee: