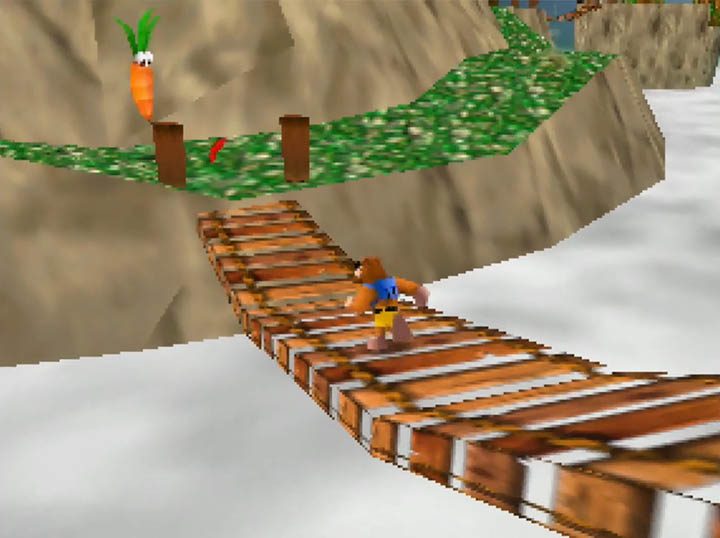 Will Rare ever give us another Banjo-Kazooie game? Who knows, but at least we have great fan games like Banjo-Kazooie: Worlds Collide to entertain us in the meanwhile.

It offers nine new worlds for you to explore, and a slightly different gameplay experience to the original.

The mod works on both emulators and original N64 hardware – although you’ll need a flashcart for the latter.

Although, they’re not entirely new. Each location is, in fact, a mash-up of places from the bear ‘n’ bird’s past N64 adventures.

WitchyWest, on the other hand, merges two worlds from the same game (Banjo-Tooie).

Much like the environments, the music for each world is a mix of two or more tracks from the official games. They sound strangely familiar and fresh at the same time!

Banjo-Kazooie: Worlds Collide feels authentic, despite being a fan game. It’s stuffed full of subtle nods and references to past events in the Banjo-Kazooie universe.

The in-game dialogue really hits the spot too. Characters speak and behave as you’d expect, and that Rare brand of humour is present throughout.

Longtime Banjo-Kazooie fans will really get a kick out of this lovingly crafted mod.

Banjo-Kazooie: Worlds Collide plays just like the first N64 game. You can use all of Banjo and Kazooie’s original moves and abilities, but not any of the techniques learned in Banjo-Tooie.

One area where this mod does differ drastically from the original is gameplay objectives.

Surprisingly, Banjo-Kazooie: Worlds Collide is not a massive collect-a-thon. In fact, there’s only one Jiggy to find in this game.

In eight of the nine worlds, all you have to do is collect 10 musical notes and some Mumbo tokens.

Getting as many musical notes as possible per world is important, as you’ll need them to unlock later worlds.

There are also two honeycomb pieces per world, but these are entirely optional. The final world has just five Jinjos, and collecting all of these gives you the Jiggy you’re after.

It sounds simple enough. However, these items are often spread out and in difficult-to-reach and treacherous locations.

And just like in the original game, you must collect all of a world’s notes in a single visit without leaving or dying.

So even if you find nine of them and then die or leave, you’ll have to find all nine again – as well as the tenth – next time.

This setup, combined with Banjo-Kazooie: Worlds Collide’s heavy emphasis on tricky platforming, makes for a rather challenging game at times. That said, it’s the ideal difficulty level for veterans of the series.

And because the worlds are relatively small in size, it always feels manageable. The entire game only takes about three to four hours to complete.

Banjo-Kazooie: Worlds Collide doesn’t have the same gameplay variety as the original games.

In fact, it’s primarily just platforming challenges. There little in the way of puzzles or additional item-gathering tasks.

The way in which you can interact with most worlds is also pretty limited. Only very occasionally are there moments where you can raise platforms or destroy objects.

It’s understandable. After all, this is a mod of a 20-year-old game that was never meant to be modded in the first place.

And despite its limitations, Banjo-Kazooie: Worlds Collide has some really clever moments.

For example, some in-game tasks from the original game make an appearance, but with notable tweaks. As a result, they’re more challenging than before.

There’s also a world that’s just one big multiple-choice quiz. It tests your knowledge across both Banjo-Kazooie N64 games, and it’s pretty unforgiving if you make a mistake!

If you’re a fan of the series then you really should give Banjo-Kazooie: Worlds Collide a go. It has all the charm of the original games, and some of the references and Easter eggs will truly delight you.

How can I play Banjo-Kazooie: Worlds Collide?

The patch is an xdelta file. Use Delta Patcher to apply it to the ROM.

Just stick the patched ROM on your EverDrive 64’s SD card and you’ll be good to go!

I played through the entirety of Banjo-Kazooie: Worlds Collide on an N64 console. I didn’t encounter any major game-breaking bugs or performance issues, but the game did crash once or twice.

There are also some occasional graphical glitches that look a bit odd, but they’re relatively minor and don’t ruin the gameplay experience.