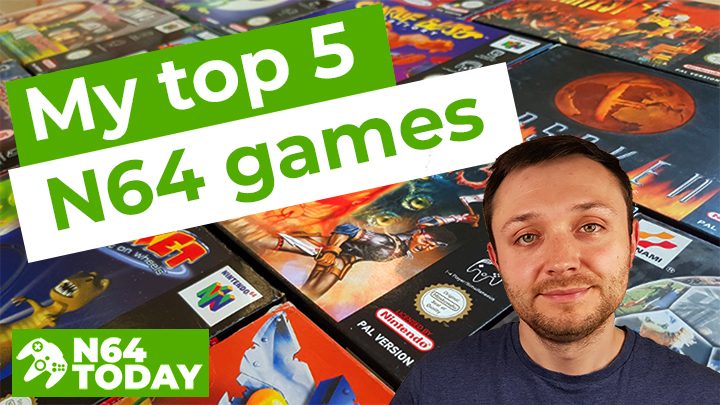 When reviewing a game for N64 Today, my main goal is to determine whether or not it’s still fun to play.

This means putting a game’s legacy to one side and focusing more closely on graphics, controls, and frame rate. In other words, the things that can really affect your enjoyment of a game today.

It also means that sometimes I end up giving low scores to games that I really enjoy. Other times, it’s the opposite!

So I thought it’d be interesting to share what my personal top 5 N64 games are.

I haven’t created this list with N64 Today’s scoring system in mind. My love for these games is purely down to personal taste – and a lot of nostalgia!

You can either watch the video or keep on scrolling to read a text version.

From now on, I plan to create videos to accompany many of my posts. That way, you can choose to enjoy the content in whichever format you prefer.

It’s the year 2016. Earth is on the cusp of extinction following frequent alien invasions over the past 100 years.

As supersoldier Adam Drake, you must travel back in time and stop the invaders at key points in history to reverse humanity’s fortunes.

Body Harvest‘s premise is immediately gripping, although it’s the game’s ambitious design that draws me to it.

It’s a third-person shooter set in large open-world environments. While this type of game is now prevalent, it was actually pretty uncommon for the time.

For example, just like in GTA III, you can commandeer a variety of land, sea and air vehicles. They’re not only useful for travelling, but also provide better protection against the alien onslaught.

Each of the game’s levels is set in a different time period and region. The overall objective is to reach the area’s alien boss and destroy it.

Along the way, you must take care to protect the local population. This is because the game tracks the human death toll. Allow too many people to die during the level and you’ll instantly lose.

Of course, the aliens aren’t going to make this easy for you.

Groups of alien bugs known as “harvester waves” will spawn into towns and villages and deliberately target humans. You’ll also have to deal with natural and alien-induced disasters that can result in massive loss of life.

It gives the game an overarching sense of urgency. That said, you do get some downtime from the action.

Indoor sections adopt a slower pace, where the focus switches to finding secrets and speaking to people in the area you’re exploring.

Also, Body Harvest doesn’t take itself too seriously – despite its dystopian theme. The game is stuffed full of tongue-in-cheek pop culture and historical references.

As great as it all sounds, Body Harvest is a flawed game.

It’s clunky to play and sluggish to play, and the save system is brutally unforgiving.

But I also think Body Harvest is greater than the sum of its parts. If you can tolerate the flaws then you may find this to be one of the most entertaining N64 games.

4. The Legend of Zelda: Majora’s Mask

I’ll cut to the chase: The Legend of Zelda: Ocarina of Time doesn’t feature in my top 5 N64 games.

Some may cry blasphemy. But for me, Link’s second N64 adventure is a deeper and more emotional experience.

Following the events of Ocarina of Time, Link sets off on a new quest. However, things take a turn for the worst after a chance encounter with the Skull Kid.

This forest being has been possessed by Majora’s Mask, an ancient evil hellbent on destroying the world.

As a result, the Moon will crash into the Earth in a mere three days. Unless Link does something about it that is.

There’s just one problem though. It’s impossible for Link to manage this in the time he has.

The only way he can succeed is by repeatedly resetting the three-day cycle using the mystical power of his ocarina.

Majora’s Mask literally runs like clockwork. Characters live their lives according to schedules, and events take place at specific times.

It doesn’t quite give the illusion of a living, breathing world. But it’s certainly a lot more exciting than most other N64 game worlds, which tend to be very static.

Of course, there’s a pretty big downside to going back in time. Everything resets.

Halfway through a dungeon? Sorry, all that progress is now lost.

I often hear complaints about how this ruins the game for a lot of Legend of Zelda fans, and I understand where they’re coming from.

That said, each dungeon or quest is easily manageable within the three days – so long as you manage your time. There’s actually an ocarina song you can play that slows down time, giving you a bit a more breathing room.

Majora’s Mask still has the classic dungeon-exploring gameplay we’ve all come to love and expect from the series. But in this game there’s a far greater focus on side quests.

What I love about these sub-missions is that a lot of them involve interacting with other in-game characters.

Some of the situations they find themselves in – all while the moon is falling – are absolutely heart wrenching. And even if you do help them, once you go back in time it’s as if you did nothing at all.

And this is where I think Majora’s Mask truly excels. Its story is emotive on a level beyond that of virtually all other N64 games.

You should definitely try it out if you haven’t already.

F-Zero X is the fastest racing game on N64. Even now it still masterfully delivers a sense of speed that’s almost overwhelming.

The game runs at 60 frames per second (one of the few N64 games to do so), and this certainly helps.

And it manages this despite there being 29 other cars on the track with you.

To achieve this, the game’s graphics are pared down. But that doesn’t matter when it feels as fast as it does.

However, F-Zero X is more than just zooming along at high speeds. It’s a calculating game of besting scoreboard rivals – and not just by outracing them.

One easy way to get ahead is to destroy your opponent’s vehicle by ramming them off the track. It’s satisfying brutal, although the same can very much happen to you.

As simple as they may initially look, F-Zero X’s tracks are full of interesting and challenging features.

Navigating half-pipes, jumps, narrow corridors and loops at 1200km/h is no small feat.

All these things make F-Zero X a game I frequently come back to. Winning a cup by any means necessary still feels immensely rewarding.

Everybody should definitely check out this game, if only to see just how fast it can go.

Rare’s spiritual successor to GoldenEye 007 is bigger and better in almost every way.

There are two reasons why I love this first-person shooter.

The first is that it really pushes the N64 to its technical limits, although a little bit too much at times.

The second reason is variety. There is so, so much content in this game, to the point where I can’t believe it’s only 32MB in size.

There’s even a mode where one person plays as the enemy guards in a mission.

That’s not even including the actual multiplayer mode, which has more features than you can shake a stick at.

This mode also support up to four players and an additional eight bots simultaneously. It’s a real technical achievement!

The campaign follows the exploits of Joanna Dark, a covert operative for the Carrington Institute.

She’s sent to extract a defector from DataDyne, a defence contractor with a history of dodgy dealings.

But things aren’t what they seem. There’s a conspiracy afoot, and it involves an interstellar war between two alien factions.

Admittedly, the story isn’t brilliant, and the corny voice acting doesn’t help. But the setting does allow for some really creative missions and weapons.

The game’s advanced lighting and detail really make it a treat to look at too.

You get so much bang for your buck, making Perfect Dark a superb investment and a worthy entry in my top 5 N64 games.

Goemon’s Great Adventure is a criminally underrated N64 game that deserved more attention back in the day.

It’s brimming with character, charm and superb 2.5D platforming gameplay. It also has two-player co-op, which is my favourite way to play.

The game is set in a world where every element of Japanese folklore is true. In fact, the main character is based on Japanese folk hero Ishikawa Goemon.

Oh, but there are also giant robots, bazookas and hot tubs. Did I mention that this game is absolutely wacky?

Goemon’s bizarre, anachronistic world paves the way for a lighthearted and humorous adventure.

That said, the stakes are pretty high in this game.

Playing as Goemon and friends, it’s up to you to stop the evil Bismaru. This crazy nun from the future plans to revive Dochuki, the master of the underworld, so that they can conquer the living world together.

The game is predominantly a platformer. But you also visit towns to gather information from the locals, stock up on supplies and even take on side quests.

Now and again, you have to call upon Impact, Goemon’s giant robot friend, and engage in MegaZord-esque battles.

But it’s the platforming stages where the game really excels. They’re wonderfully creative, while also offering a decent challenge.

In particular, the castle stages at the end of each area are exceptional. These tricky gauntlets really put you to the test, so be prepared for sweaty palms!

To top it all off, the game’s soundtrack is truly phenomenal. It’s a superb fusion of classical Japanese instruments and modern sounds, making it a perfect fit for the game’s setting.

If you haven’t played this game before, then I urge you to give it a try. You’re in for a real treat.