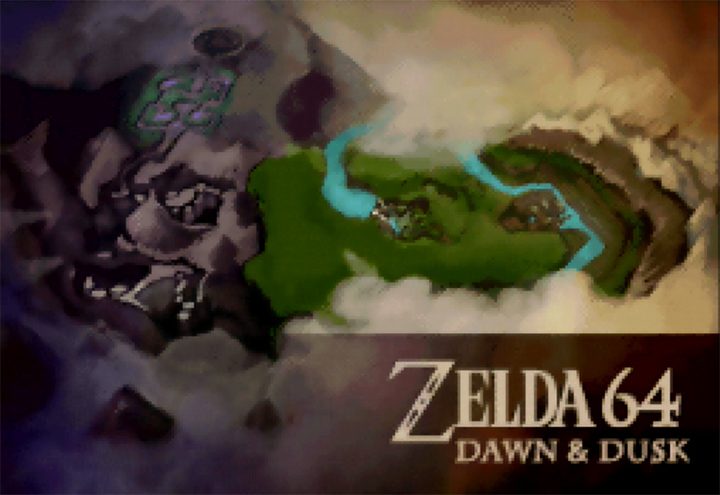 During the N64’s heyday, Nintendo had plans to release an expansion pack for The Legend of Zelda: Ocarina of Time. By using the 64 Disk Drive add-on (64DD), it would interface with the original game to offer a new experience.

Sadly, the 64DD was destined to failure. 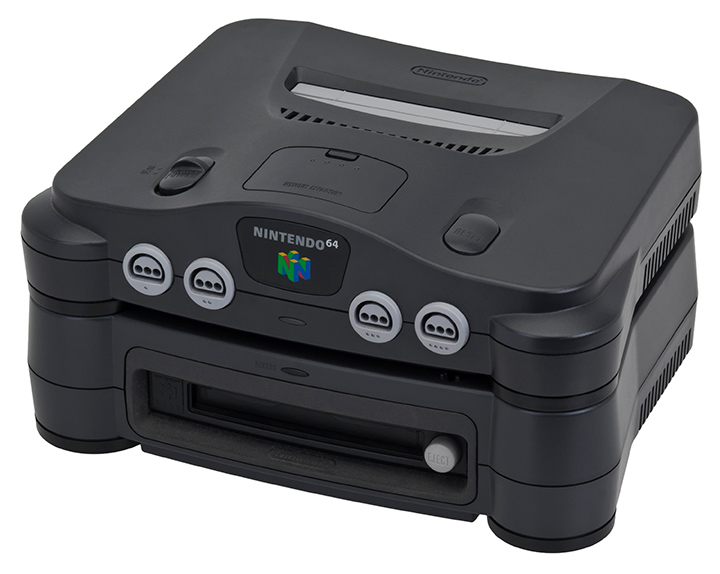 It released with minimal support late in the N64’s life (December 1999) and only in Japan. It was dead on arrival, and our chances of ever receiving an Ocarina of Time expansion were dashed.

Until now, that is.

Developed by Captain Seedy-Eye, Zelda 64: Dawn & Dusk is a brand new Legend of Zelda 64DD expansion game. You can even play it on a 64DD development unit. 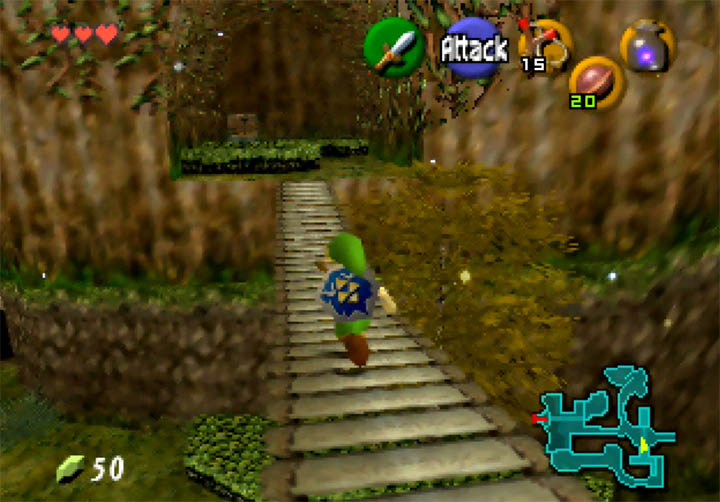 Of course, this bit of kit is rarer than hens’ teeth. So it’s just as well you can also experience it on emulators or an original N64 console using a flashcart.

Zelda 64: Dawn & Dusk was ported to 64DD by LuigiBlood, who previously released English translations of the Mario Artist games.

This expansion is a brand new Legend of Zelda adventure. It uses the same assets and game engine as Ocarina of Time, but features a new world and story.

The game is set in a once-great kingdom now split between east and west. 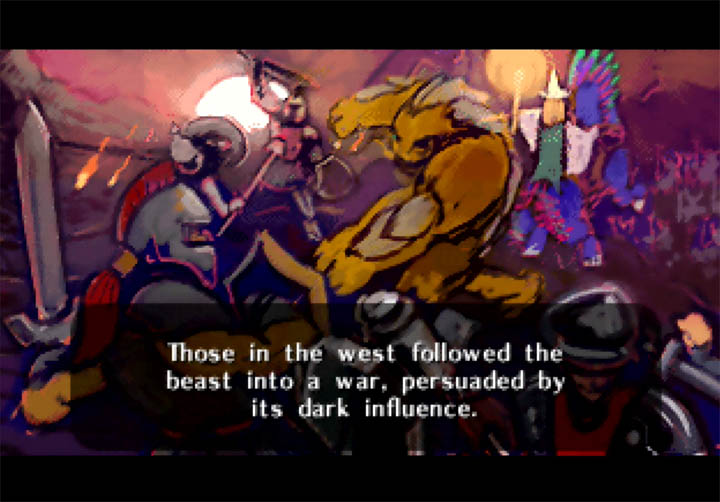 In a bid for power, the west tried to tame a legendary beast. However, this creature ended up attacking the east, resulting in a costly war for both sides.

Thankfully, a legendary priestess confronted the beast and forced it into a deep slumber. Although this brought an end to the hostilities, each kingdom ultimately fell into ruin. 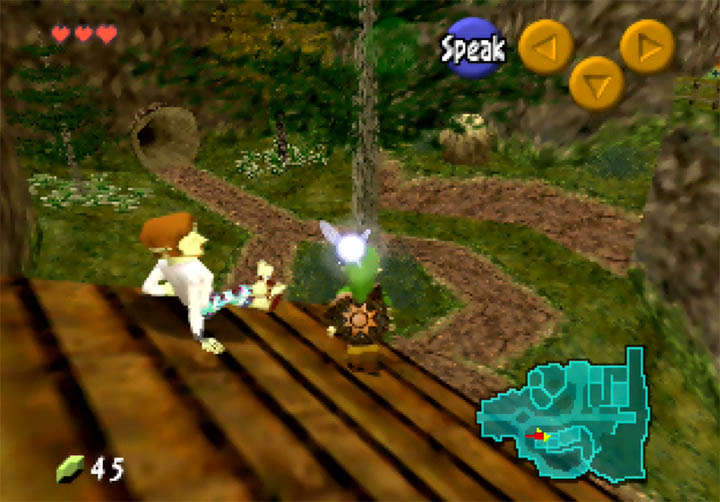 You play as a young descendant of this priestess. And now the time has come for you to set out for the Duskside to stop the beast from rising again.

Zelda 64: Dawn & Dusk may re-use Ocarina of Time’s objects and enemies, but the newly designed environments and textures make it feel fresh.

Captain Seedy-Eye has also composed a brand new soundtrack for this game. And it does a fantastic job of evoking the distinctive mood of both regions in the game. 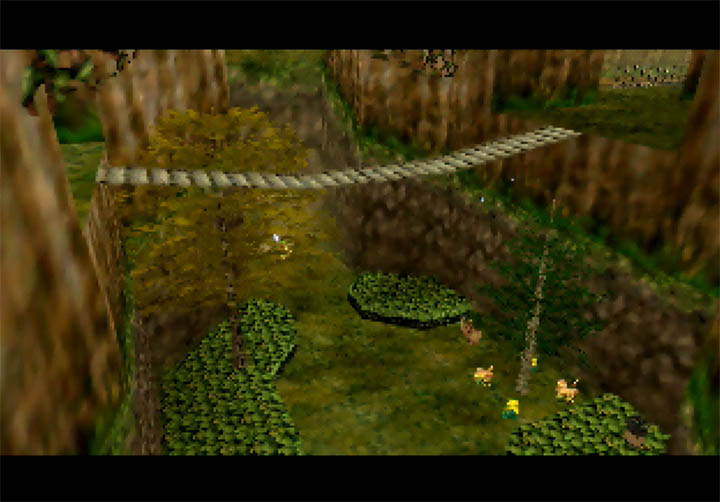 Dawnside is an ever-bright, cheery place – although by no means safe.

Duskside, on the other hand, is dark and cold. The glowing-purple patterns that coat most of its locations give it an ominous, foreboding atmosphere. 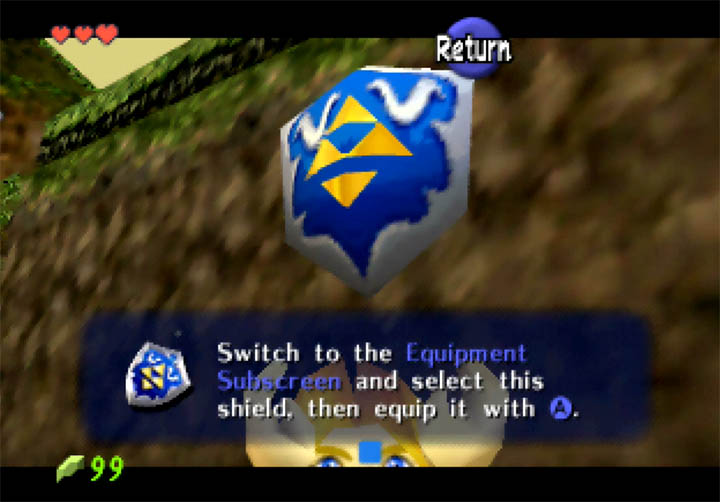 You can see a difference even in the little details. For example, the shields you can find and equip sport different decals.

There are still many familiar elements though. For one, Zelda 64: Dawn & Dusk begins in a similar fashion to other Legend of Zelda games. 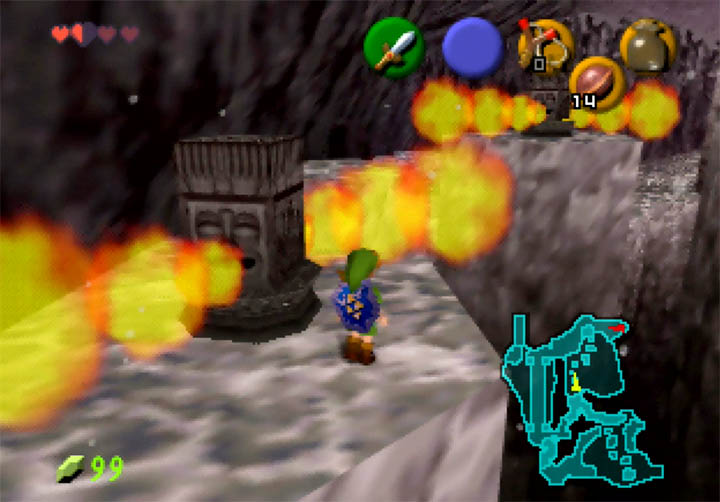 At the start, you find yourself in Dawngrove Village. Home to a handful of people, this idyllic settlement is a great place to find your feet.

Before setting out on adventure, you’ll need to find a sword and other vital equipment. 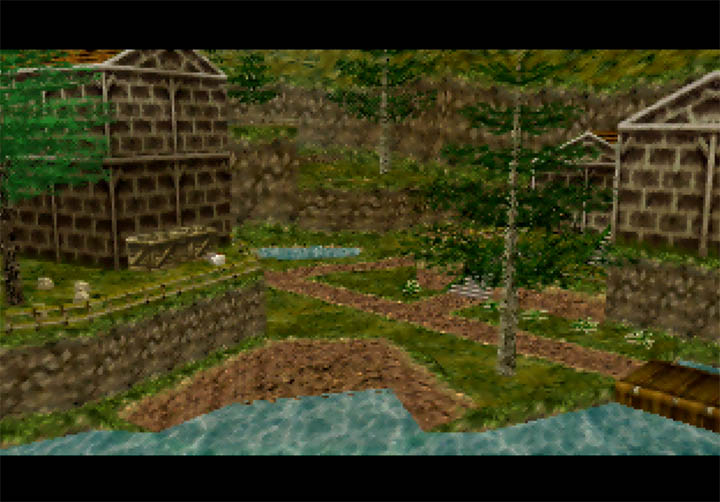 It sounds like a slow, gentle start to the game. But in reality it’s a brief respite before the tougher journey ahead.

This game plays just like The Legend of Zelda: Ocarina of Time. The control configuration is identical, and Link has the same innate abilities. 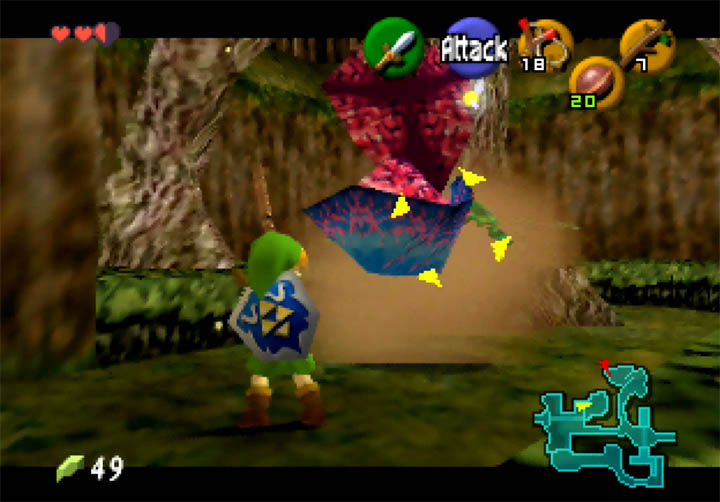 The world is a dungeon

Once you set out into the wider world of Dawnside and Duskside, you quickly realise that this adventure isn’t going to be easy.

Zelda 64: Dawn & Dusk’s world feels like it’s a single, interconnected and never-ending dungeon. Progressing from one area to the next requires a lot of careful exploration and problem solving. 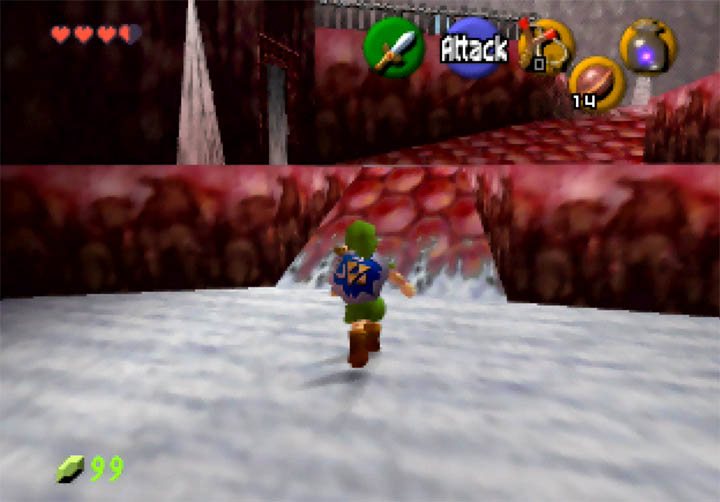 This mod is clearly aimed at veteran players. You’ll need to think outside the box and play skilfully when approaching certain challenges.

For example, at one point you have to backflip over a hazard – something Nintendo’s own N64 Zelda games never would’ve demanded of you.

Understandably, this challenge may put off some players. But it’s also what helps make Zelda 64: Dawn & Dusk feel like a fresh experience.

There are a lot of gameplay nods to Ocarina of Time. Many of platforming, stealth and puzzle segments are familiar, but usually a darn sight trickier. 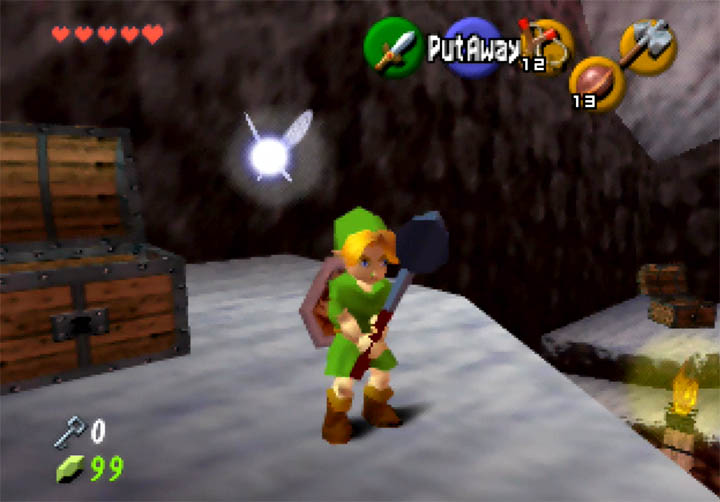 Another notable difference is that you can now use items that could previously only be used by Adult Link.

Zelda 64: Dawn & Dusk is a pretty short game – it only takes a few hours to beat. That said, you may be looking at the game-over screen for a lot of that time. 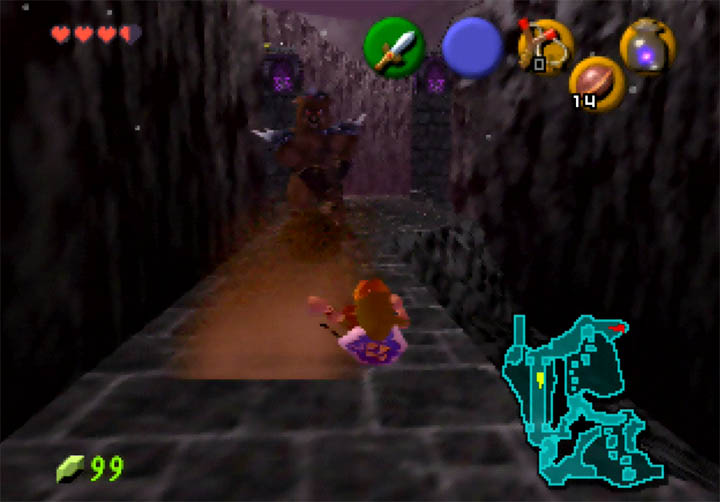 There are two versions of Zelda 64: Dawn & Dusk. Which file you need will depend on your setup.

Otherwise, they’re both exactly the same game, although save data is not compatible across ROM and Disk Expansion versions.

You’ll need to separately source a ROM of The Legend of Zelda: Ocarina of Time first. 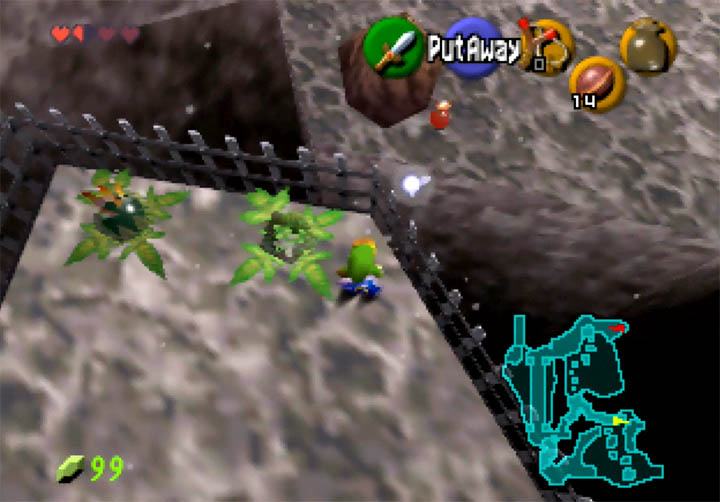 There are multiple versions to choose from. Select the one that matches the ROM version of The Legend of Zelda: Ocarina of Time you have.

To apply the patch, you’ll need to use Floating IPS – download this from Romhacking.net.

Once done you’re good to go! 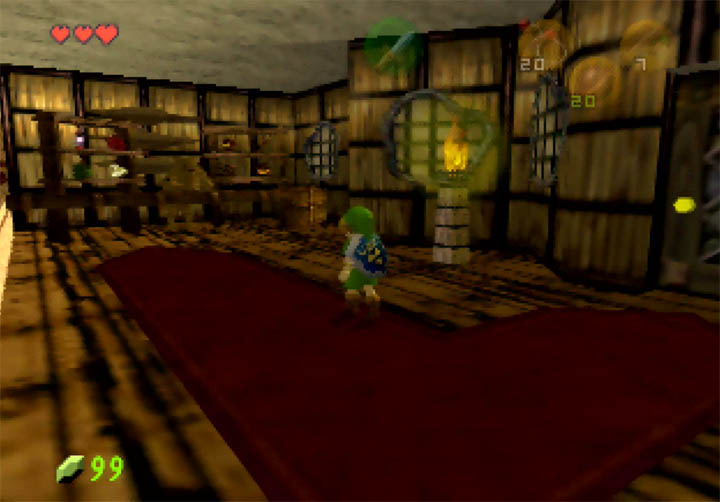 I’ve been playing on an original N64 console and have yet to come across any game-breaking bugs or issues. 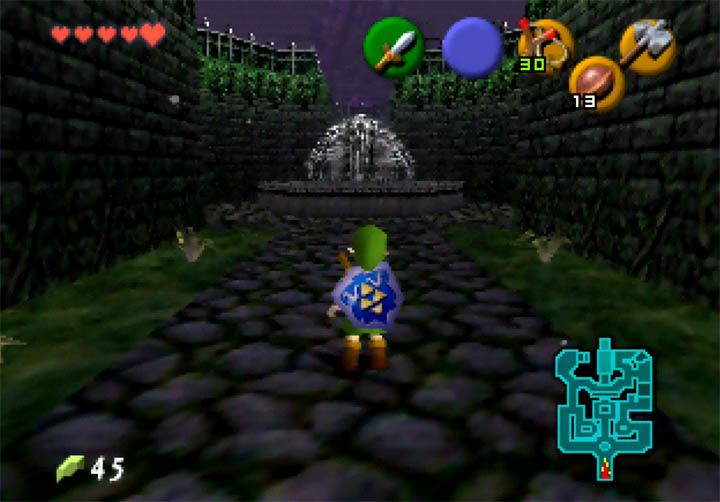 Are you one of the lucky few to own a development model of the 64DD and know how to use it?

If so, check out LuigiBlood’s how to play guide for instructions. This also includes instructions for playing this version on emulators. 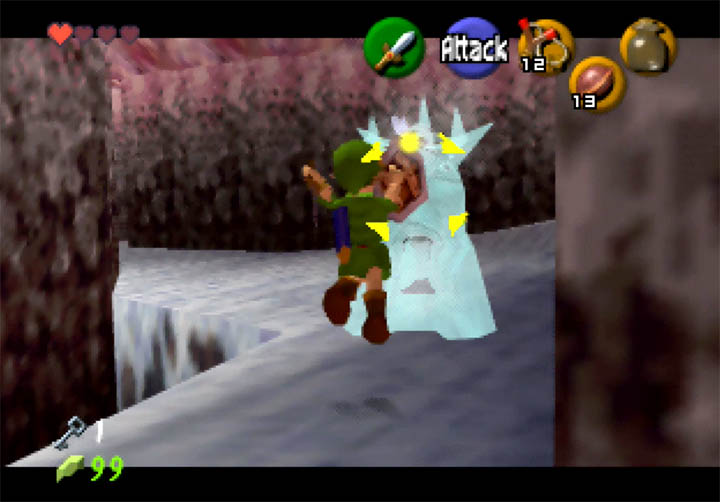 Are you happy to finally see an expansion to The Legend of Zelda: Ocarina of Time after all these years? Will you be playing it?