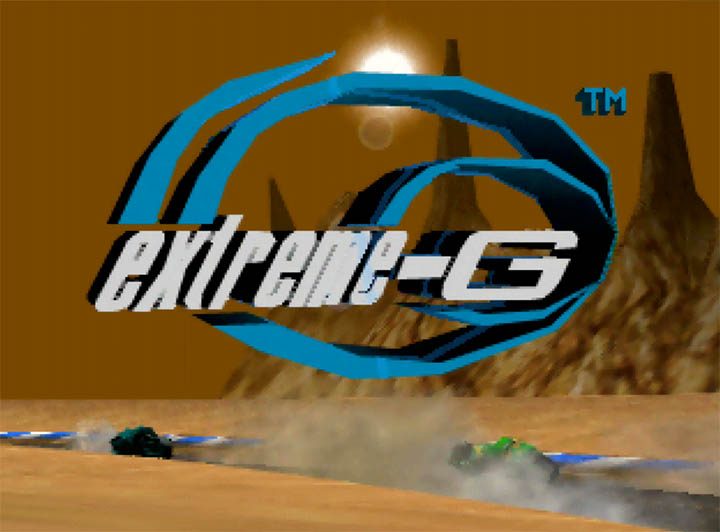 Released early in the N64’s life, Extreme-G was one of many futuristic racing games for the system.

It came at a time when gamers were obsessed with the genre. Sadly, that’s no longer the case today.

The game went down well with both critics and players in 1997, so much so that it received a sequel the following year.

Back then, the game’s futuristic look and high-speed gameplay felt like the cutting edge. But how does it fare over 20 years later?

It’s the future, and the government of the day has decided the population needs mental stimulation. 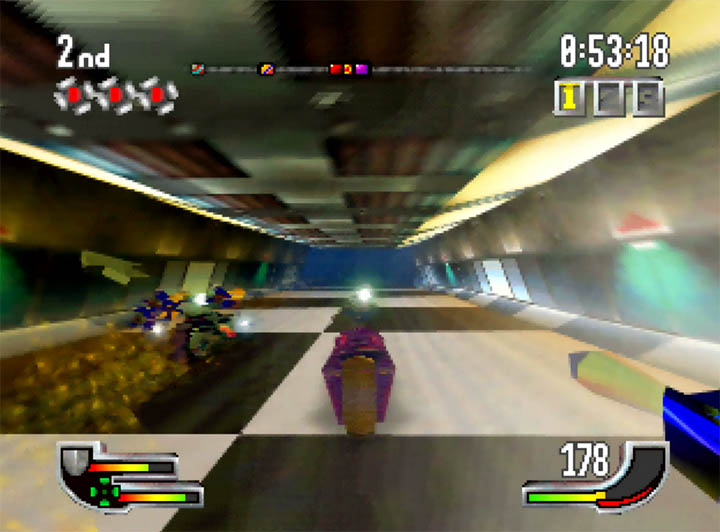 It’s hardly the most gripping premise, but then it doesn’t really matter. Extreme-G is very much style over substance, and that’s a good thing.

It’s fast. It looks cool. And it has a totally ’90s soundtrack that perfectly complements the futuristic setting and action.

And this isn’t surprising given it’s clearly and heavily influenced by Wipeout. 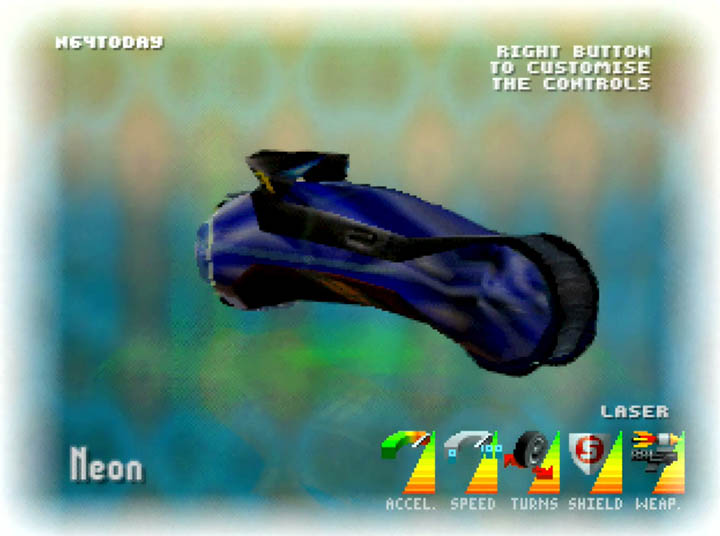 The game includes a single-player mode with three Extreme Contests across three difficulty settings. There are also a few multiplayer modes for up to four people.

Otherwise, you can practise any track you’ve completed against AI, in time trial, or as a shoot-em-up mini-game. 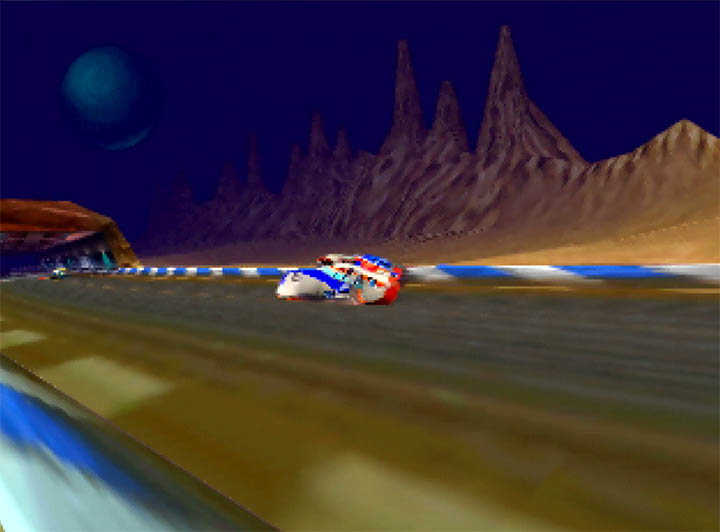 Extreme-G’s courses make the most of its futuristic setting. As you race across the game’s 12 tracks, you’ll find loops, corkscrew twists and plenty of jumps.

Navigating these feature-packed gauntlets is an entertaining challenge at 300 mph. However, what makes it even more difficult is the way your bike handles. 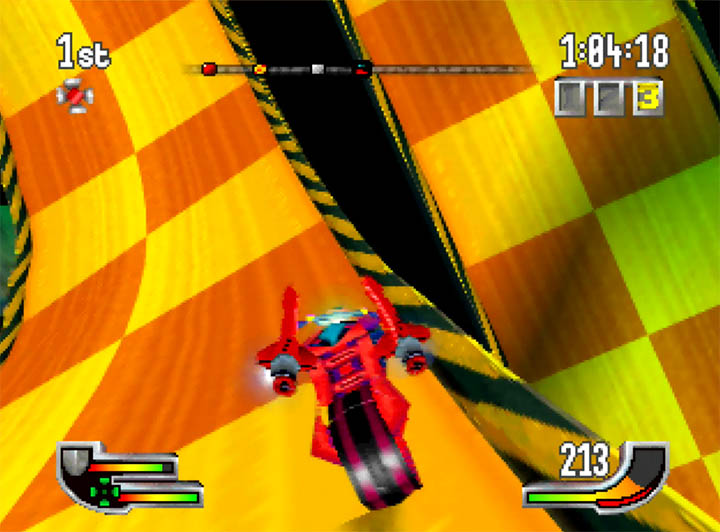 Even if you pick a vehicle that excels at turning, it still feels really heavy to move. You can’t help but spend a lot of each race grazing the wall.

To top it off, some tracks have annoying sections where a wall or object juts out in the worst possible place.

One track is just an absolute nightmare – even the AI racers struggle to stay on it. 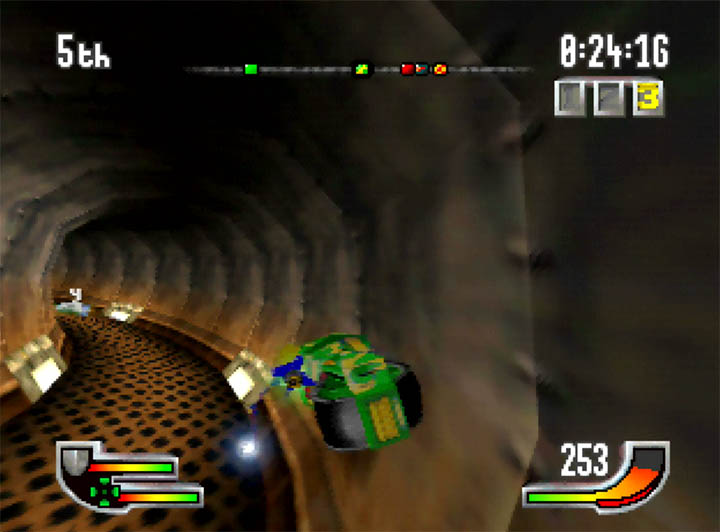 For the most part, the tracks deliver both in terms of speed and visual interest. They get increasingly more difficult, giving the game a good sense of progression.

To help keep the pace, your bike has a boost ability you can use three times per race. You can boost whenever you want, but using it tactically is often the key to winning. 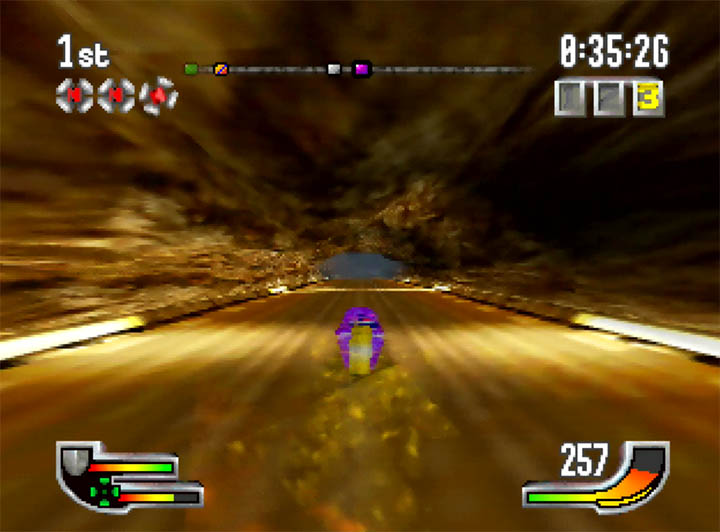 For example, if you’re well out in front, you may want to save up all your boosts to dominate in the final lap.

Alternatively, it’s a great way to quickly get moving again after taking a hit. 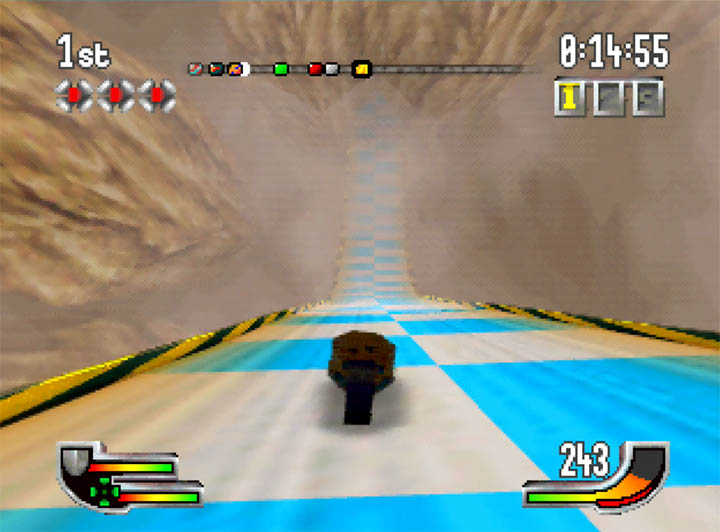 Reaching the podium at the end depends entirely on achieving a certain number of points. It doesn’t matter how well your opponents do, which somewhat reduces the competitive aspect.

In a way, you may as well be racing against yourself. 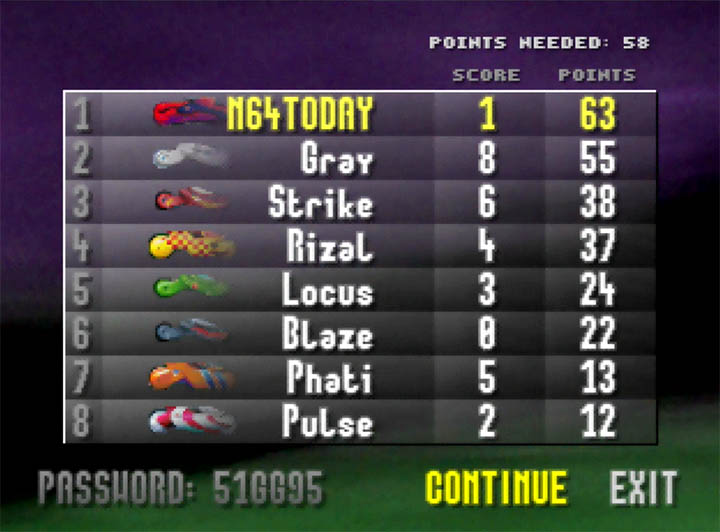 The score threshold is especially unforgiving on higher difficulties.

Therefore, all it takes is one bad race to bring a swift end to your chances of victory. Even if you’ve won the overwhelming majority of them prior to this. 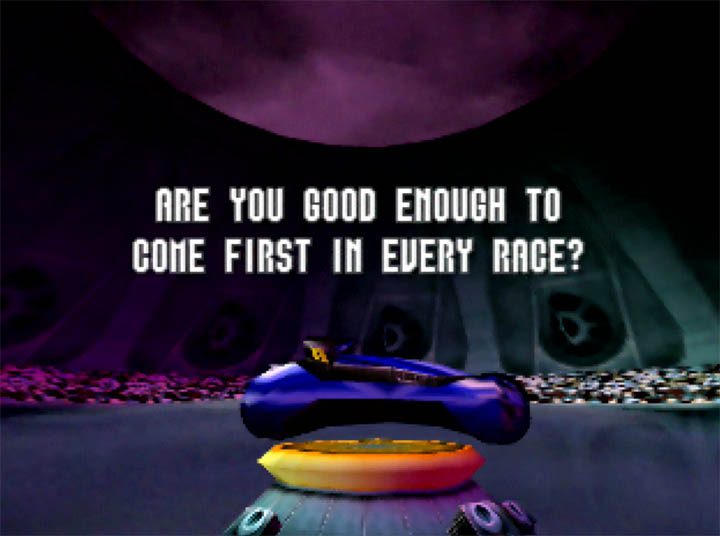 What makes this so frustrating is that you can’t retry a race. You lose and you have to do it all over again.

So, if you love games that demand near-perfection from you every step of the way then you’ll love Extreme-G.

Otherwise, you may quickly find yourself wanting to throw it out the nearest window.

Extreme-G has many power-ups to help you climb positions or maintain your lead.

They range from bog-standard rockets and mines to more inventive weapons such as teleportation traps and pulses that nullify a vehicle’s steering. 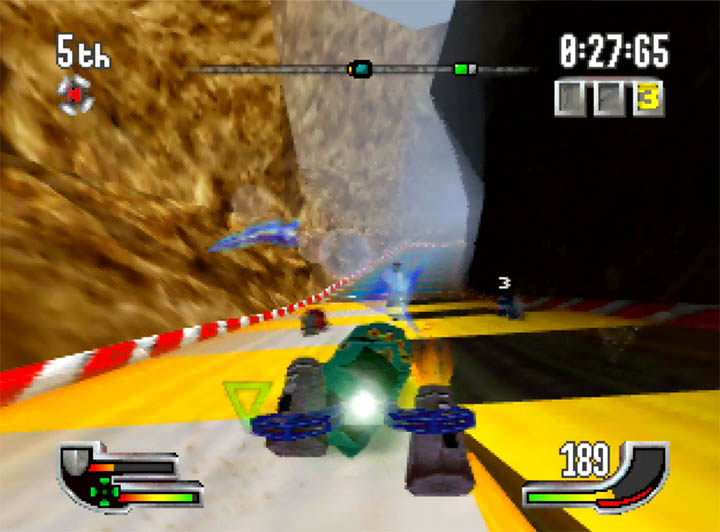 Your bike is also equipped with a built-in laser weapon for close-range combat.

Interestingly, the goal here isn’t to destroy opponents. Instead, you only use weapons to slow them down. 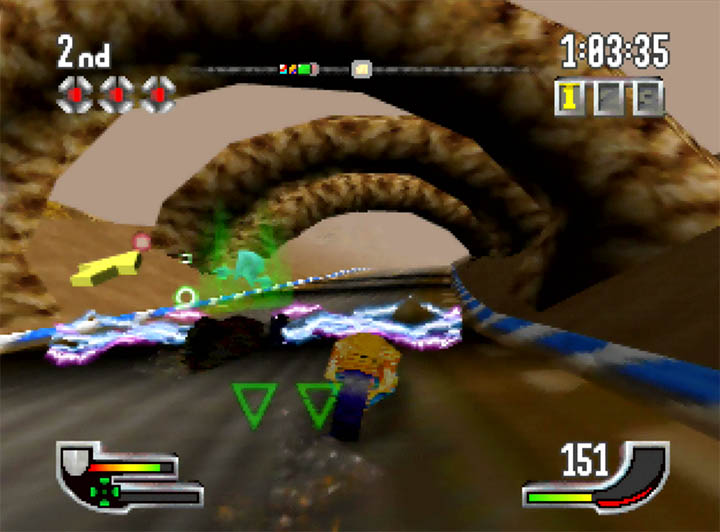 So it’s similar to Mario Kart 64 and Diddy Kong Racing in that regard.

What makes this all is a bit confusing, however, is that you have a shield gauge. Naturally, you’d expect your vehicle to explode once this has depleted. 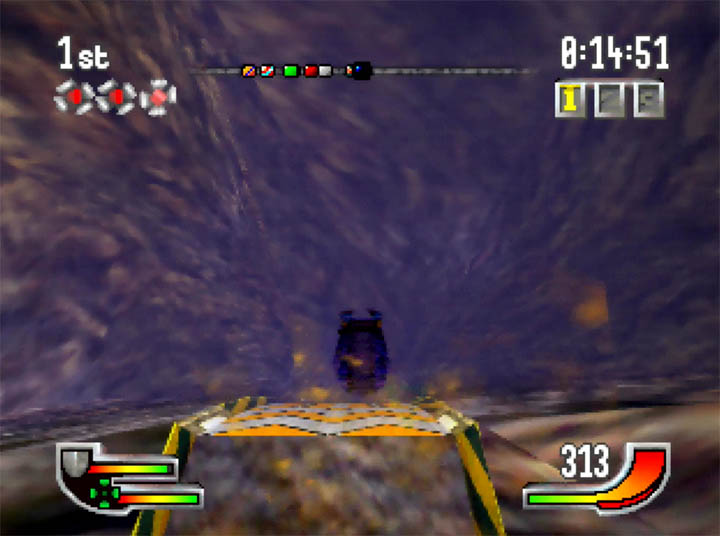 All it really means is that you’ll instantly stop if you get hit while your shield is empty.

That said, a rocket will pretty much always bring you to a standstill anyway. 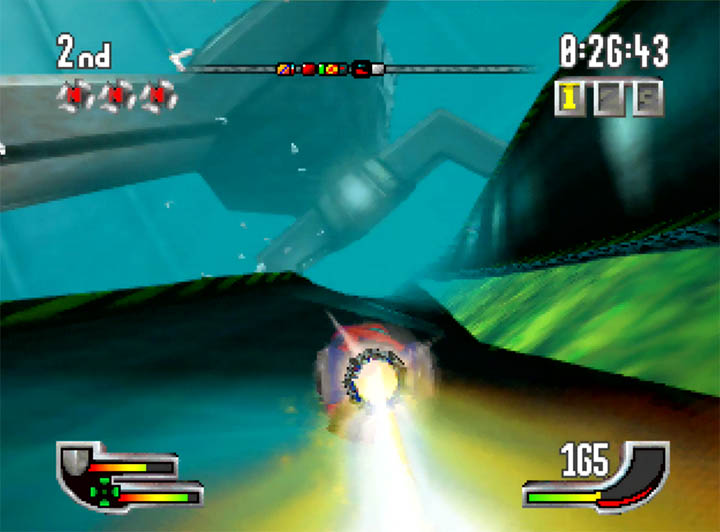 As a result, Extreme-G’s single-player mode can be very frustrating at times.

Unless you’re well in the lead, you’ll often find yourself pummeled by barrage after barrage of attacks. It’s worrying just how quickly you can end up in last place. 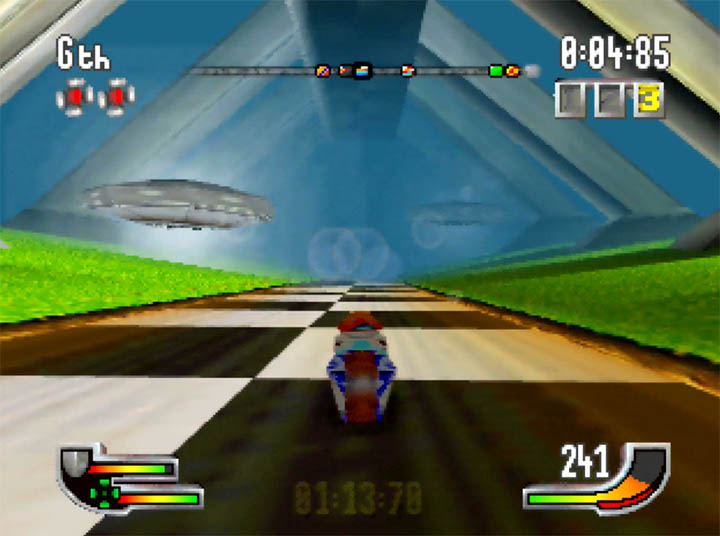 Thankfully, you can turn weapons off. In fact, doing so makes Extreme-G considerably easier – which might put you off.

Nevertheless, it’s nice to have the option.

It’s super stylish in every aspect of its presentation – even today. It’s particularly impressive given Extreme-G was a fairly early N64 game. 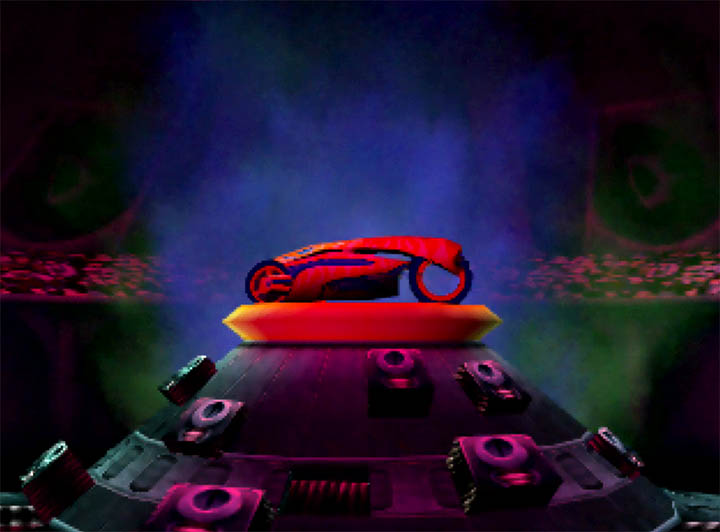 It’s not as fast as F-Zero X or Star Wars Episode 1: Racer. Nevertheless, the bikes belt along the track at 300 mph, and it certainly feels as fast as it says. 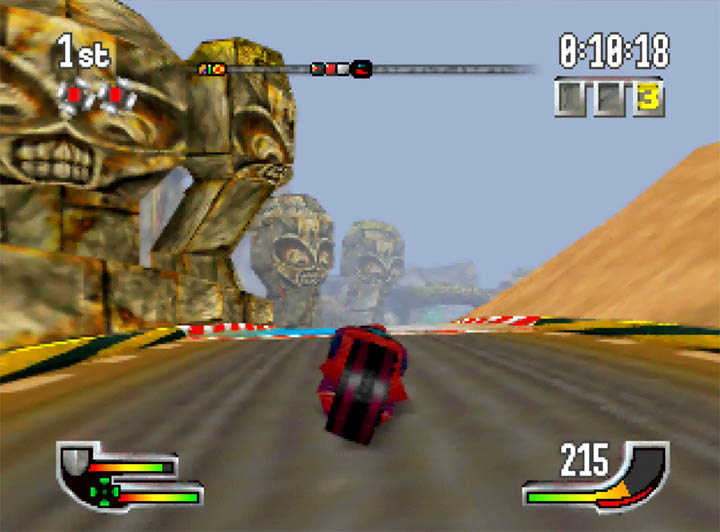 The game does suffer from some slowdown in parts. But it’s usually very brief and during complex segments of the track. So it doesn’t really impact the experience.

It also holds up really well in multiplayer. With four players, the visuals become fuzzy and you lose the nice HUD for a simpler display. But the speed is still there. 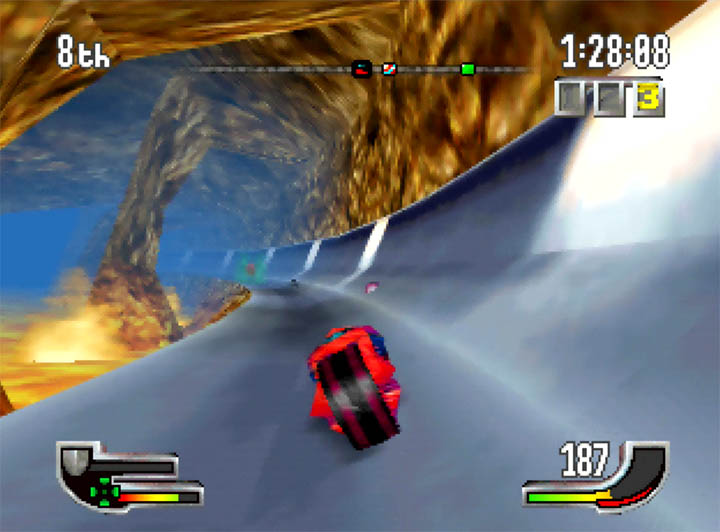 Extreme-G has a fairly short draw distance to ensure its mostly consistent performance.

As a result, you can’t always anticipate what’s coming ahead, unless you learn the tracks well. And it’s fair to say that’s a common expectation of most racing games. 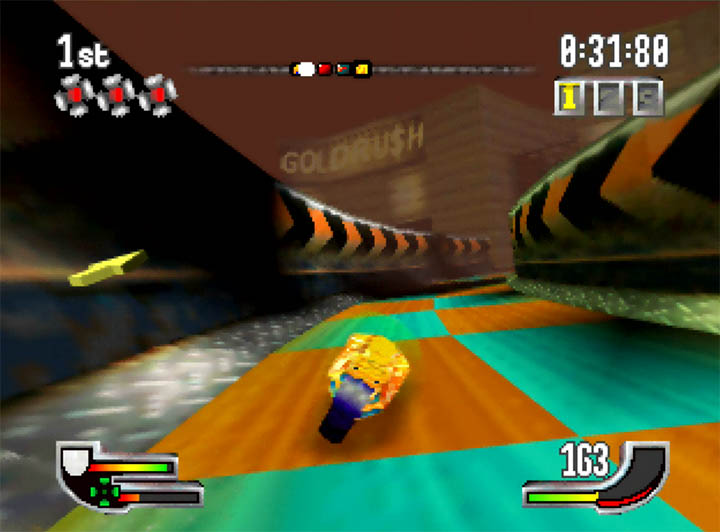 You do at least get a handy on-screen arrow informing you of upcoming turns.

Unsurprisingly, Extreme-G looks best on a CRT TV. On a modern display, the colours are a bit faded, and darker tracks suffer as a result.

This can be rectified on an UltraHDMI-modded N64 thanks to the gamma boost option. 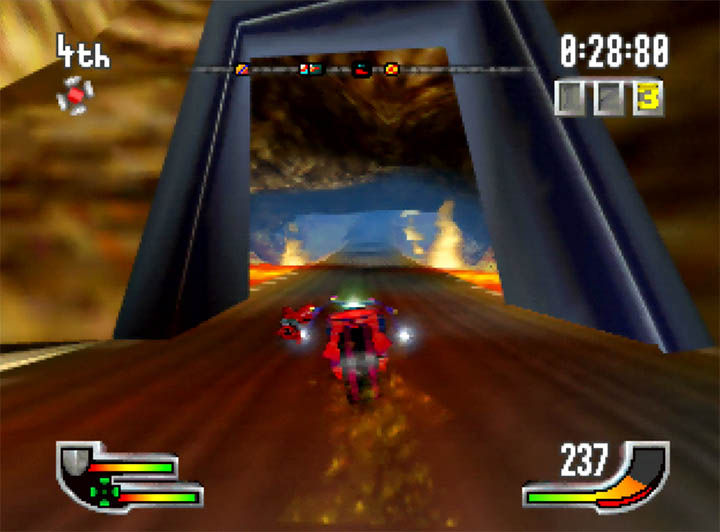 Up to four players can compete simultaneously in Extreme-G’s multiplayer.

There are four modes, but the main attraction is the head-to-head racing. The standard race format is what Extreme-G does best, and it works just as well in multiplayer. 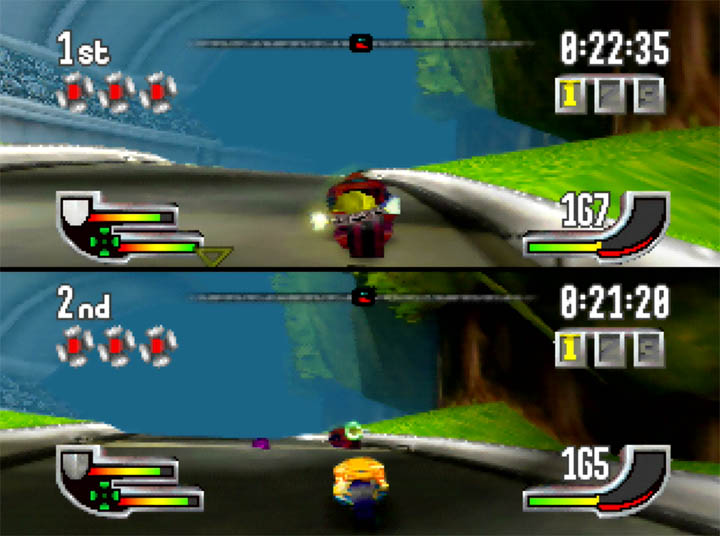 The same can’t be said for the battle mode. Much like Mario Kart 64, you fight it out to be the last player standing in small arenas using power-ups.

But sadly it just isn’t suited to Extreme-G’s high-speed gameplay. Trying to land a shot on one another while zipping around is immensely difficult.

As a result, the most effective weapon is the mine. You’ve got more chance of your opponent crashing into one than you have of hitting them with a rocket. 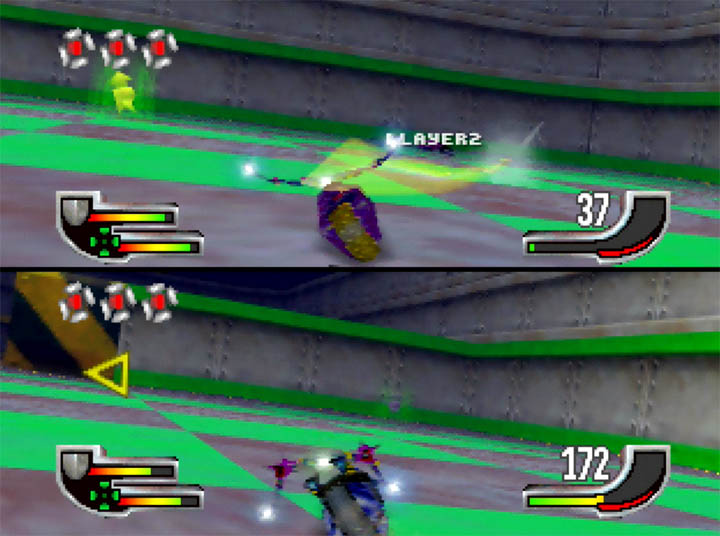 Otherwise, there’s a entirely passable flag-collecting mode and a tournament option. Here, up to 16 players can compete for the top of the scoreboard across any of the multiplayer modes.

It’s a nice feature to have, although whether you’ll ever use it is questionable. 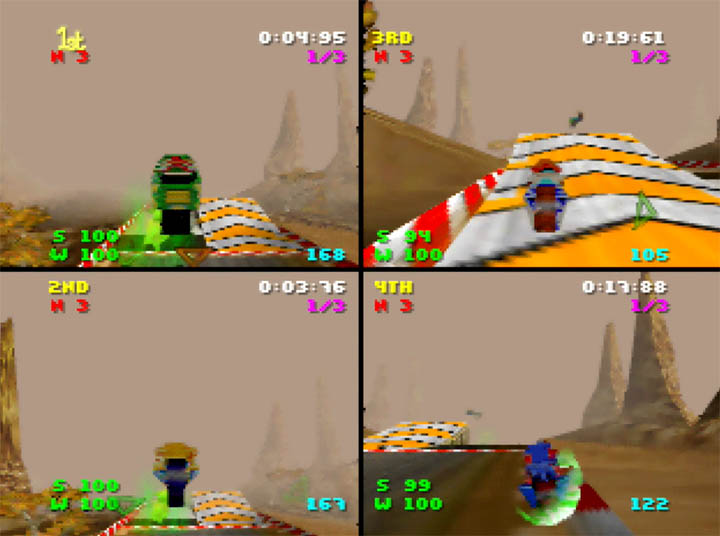 In particular, the audiovisual presentation still impresses. It looks and sounds as cool as it did in 1997 – provided you forgive the low screen resolution.

Not only that, but Extreme-G’s strong technical performance ensures it lives up to being the smooth, high-speed experience it claims to be.

It’s not the easiest game, mostly due to its unforgiving weapon system and punishing scoring. But you can at least turn the former off, and with practice the game is perfectly beatable.

And while not outstanding, Extreme-G’s multiplayer offering is nevertheless strong. In fact, it’s a solid alternative to the best N64 multiplayer games.

So what are you waiting for? Hop on your plasma-powered bike and give Extreme-G a go. 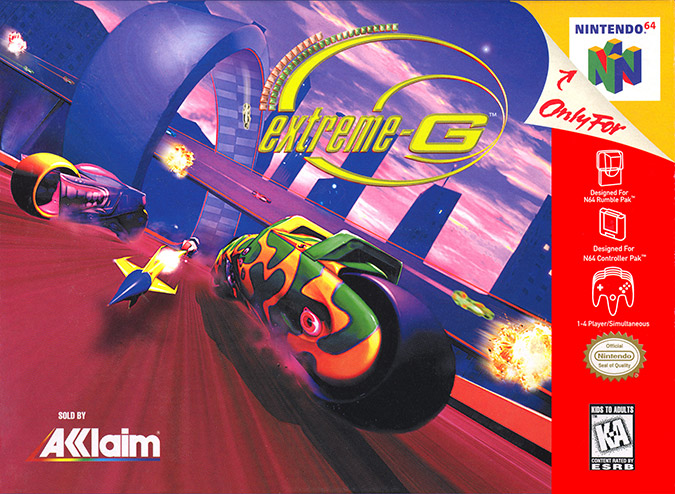