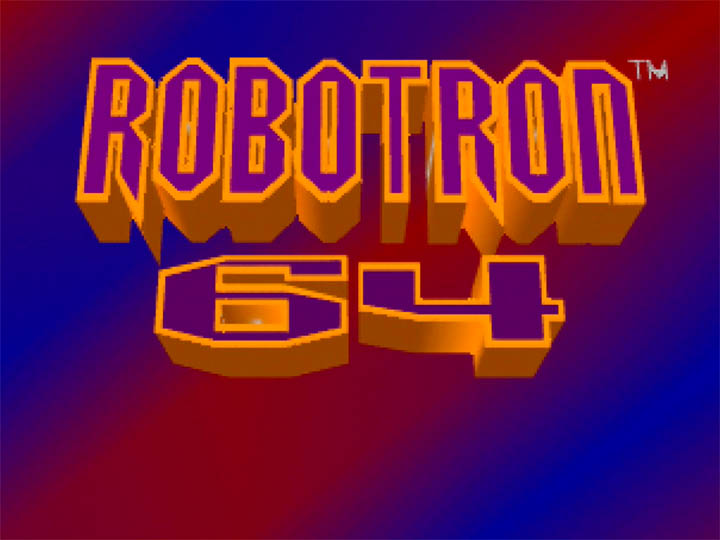 Robotron 64 was one of many arcade remakes released by Midway Games in the late ’90s. Unfortunately, it failed to capture the attention of most N64 owners.

It’s not surprising given it was up against the likes of Diddy Kong Racing, Star Fox 64 and GoldenEye 007 when it released in early 1998.

It may not have been worth a punt over 20 years ago. But what about now? Have players been missing out on an unknown gem in the N64’s library all this time?

It is the year 2084. Humankind has achieved a tremendous technological feat by creating the Robotrons, a race of vastly superior machines.

The Robotrons are so advanced that they quickly conclude the human race is inefficient and must, therefore, be destroyed. 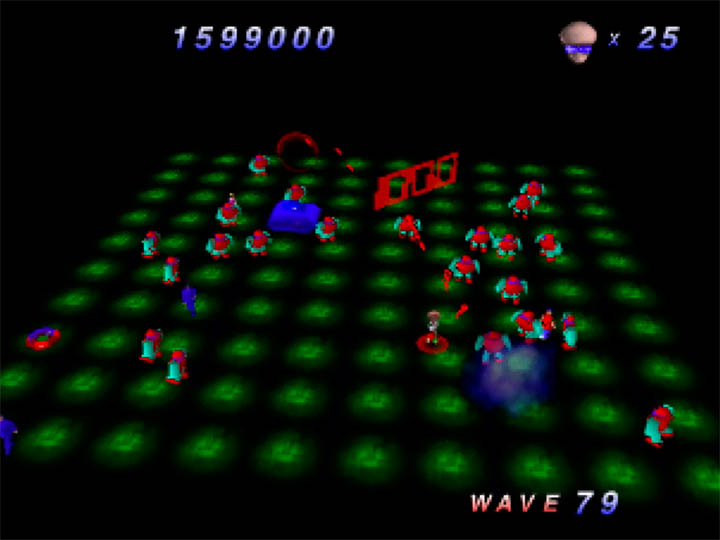 This is where you come in. Playing as a genetically enhanced superhuman scientist, it’s up to you to save the last human family from extinction. No pressure, right? 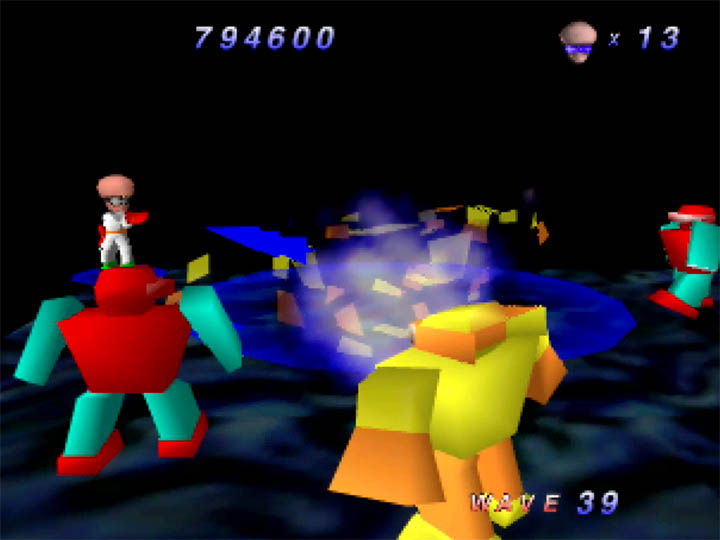 True to the original game, it’s a multi-directional shooter in which you must destroy all on-screen enemies before they exterminate you.

There are 200 levels, and ultimately the goal is to reach the end while earning the highest possible score along the way.

Although it has many levels for you to complete, Robotron 64 remains a very similar experience from start to finish.

Each wave, as the game calls it, is set in a square or octagonal arena. There are dozens of enemies on screen at any one time, and nearly all levels have human characters for you to rescue. 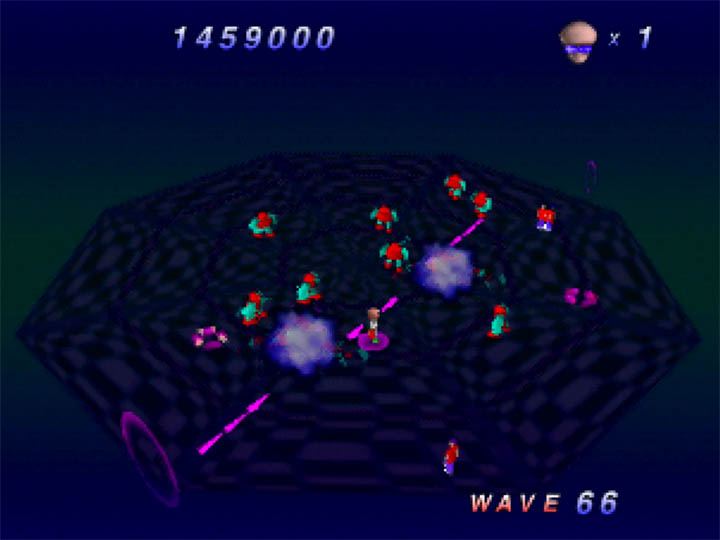 Saving humans isn’t required, but doing so earns you a lot of points. And points mean prizes in the form of extra lives.

There are many different types of Robotrons to defeat, although they largely fall into two categories: Grunts and Hulks. 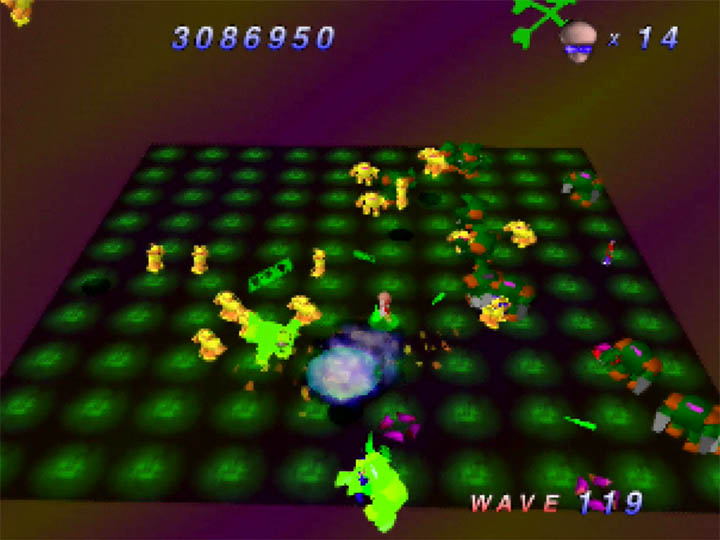 Grunts are weak, but attack in large numbers and try to swarm you. Hulks, on the other hand, are indestructible, and usually focus on hunting down humans within the arena.

That said, they’ll happily dispose of you if you get too close. 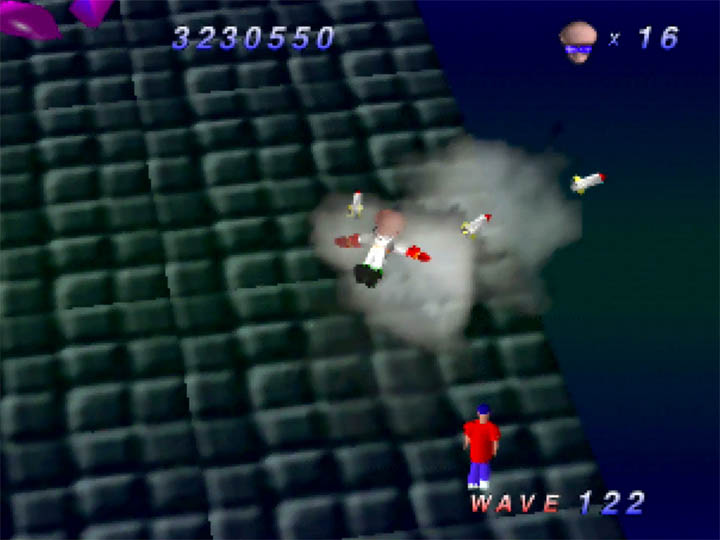 To top it off, you have enemies that can spawn minions, or even turn the humans against you.

As a result, Robotron 64 is often a very chaotic experience – and intentionally so. It overwhelms you with so much on-screen action, making encounters tense and exciting in the moment. 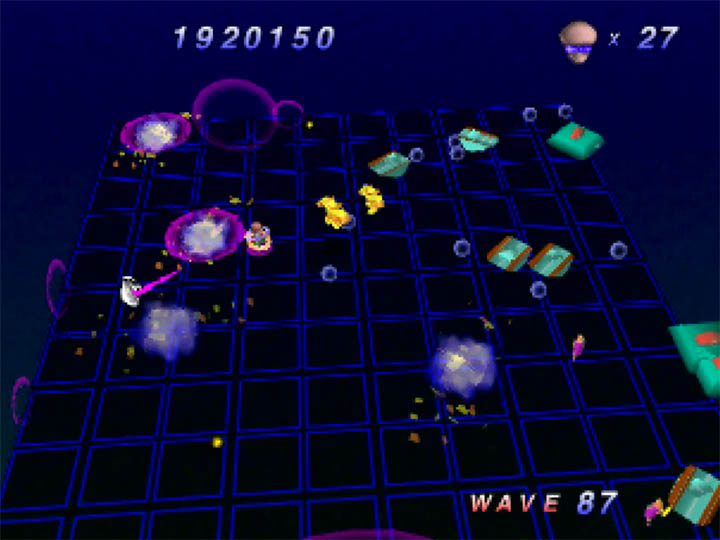 Despite this, most levels are not memorable in the slightest. Over the course of the game, you regularly see the same grouping of enemies rolled out again and again.

More specifically, there isn’t enough variation between enemies to fundamentally change how you approach the game. 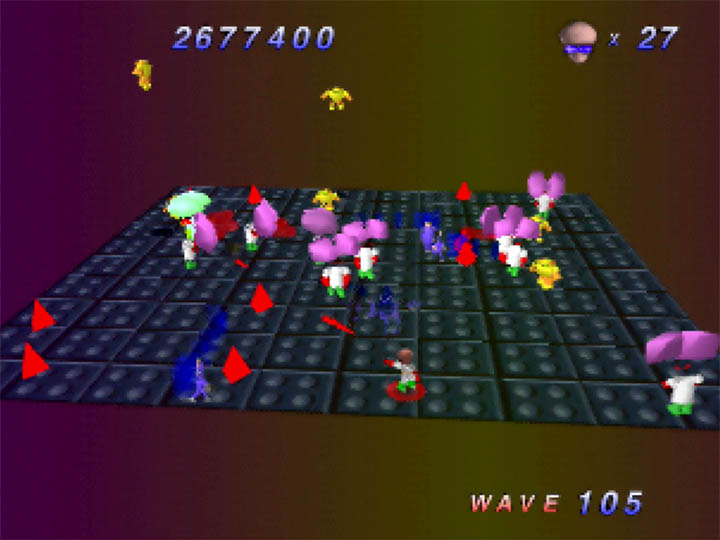 For the most part, running around the outskirts of the arena and shooting inwards is almost always the best tactic.

You can also switch between different camera angles. But all of them, except for the default view, are useless to the point of being a hindrance. 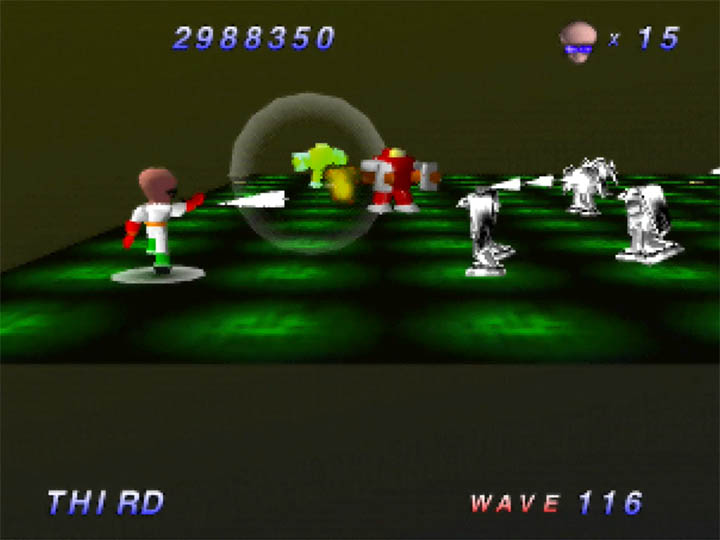 Robotron 64 also takes far too long to get going. You can easily clear the first 50 waves on normal difficulty without much trouble.

So even if you’re an ardent shoot-em-up fan, you may find the experience gets a bit too repetitive very quickly.

Thankfully, Robotron 64 offers a small amount of variety from time to time.

Every 20 levels you get given a bonus challenge to beat. You can’t die during these, and the goal is to destroy as many enemies as possible. 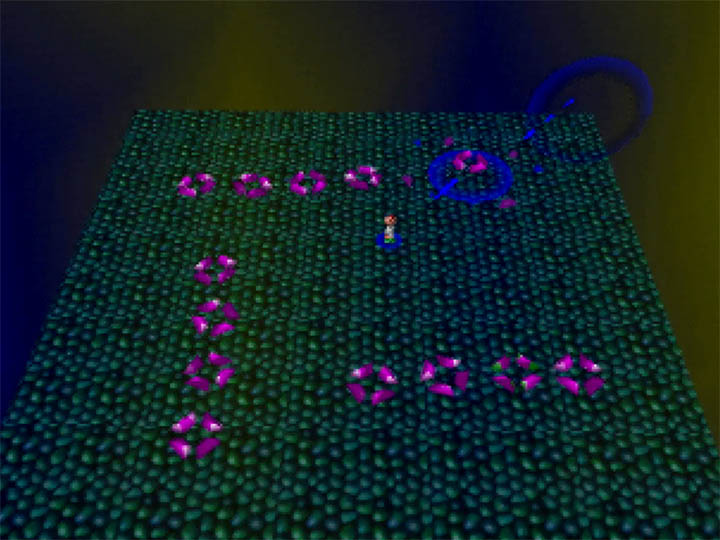 They’re a nice distraction, and it’s satisfying when you destroy an entire squad and earn bonus points for it. It’s just a shame these levels don’t break up the main action a little more often.

Robotron 64 also has boss fights, although there are only two of them.

It’s baffling that the developers didn’t create more of these. They could’ve been a great way to inject some novel ideas into the gameplay. 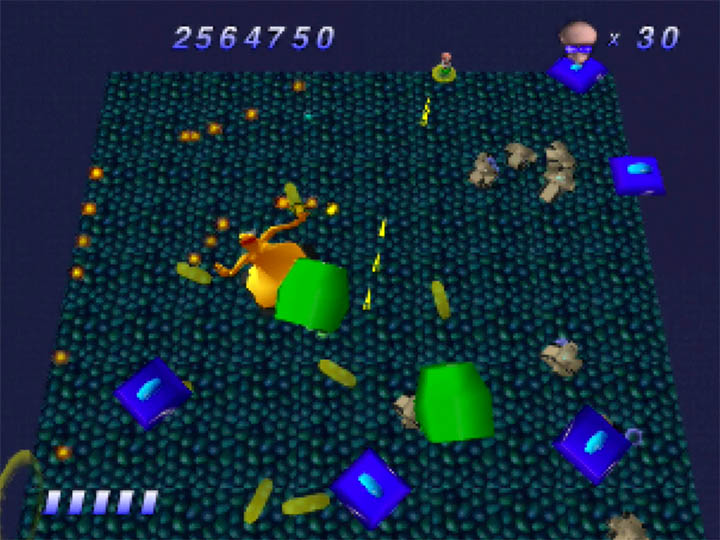 On the plus side, the game’s range of power-ups is a bit more substantial. Not only that, but often the key is choosing to use them at the right time.

For example, the flamethrower makes short work of Mega Brains – the toughest enemies in the game. And being able to simultaneously shoot in three or four directions is a blessing during the most hectic moment of a wave.

One joystick or two?

Robotron 64 is one of the few N64 games to support two joysticks per player.

When using a single controller, you can move with the stick and aim in eight directions with the C buttons. It’s also possible to swap these around. 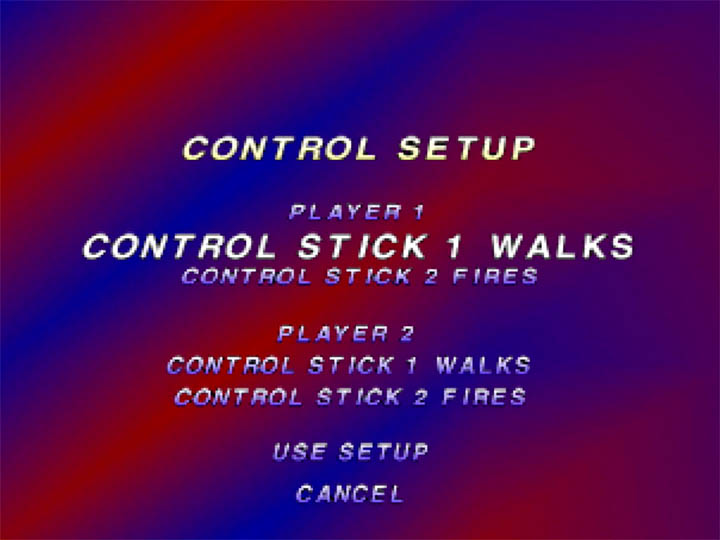 However, plug in two N64 controllers and you can use a stick for each action.

It doesn’t make a huge difference in terms of movement. But being able to aim more precisely in later stages can mean the difference between life and death. 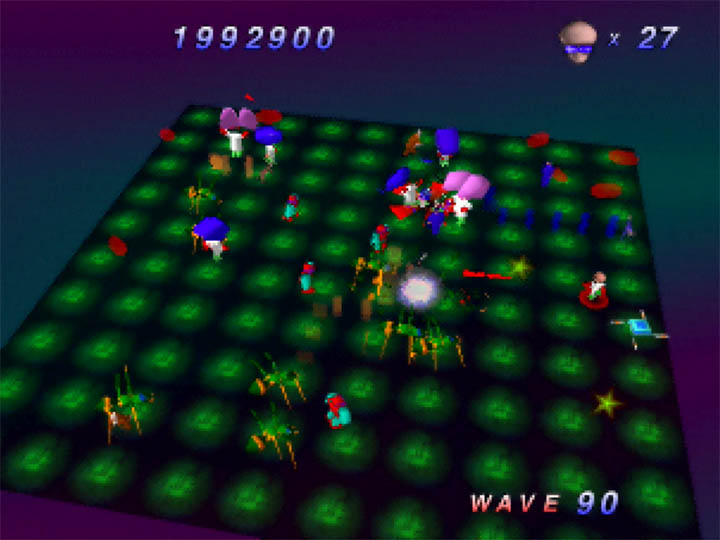 Robotron 64 really misses a trick when it comes to its multiplayer mode.

Up to two players can compete against one another by taking it in turns to play through the game. That’s it. 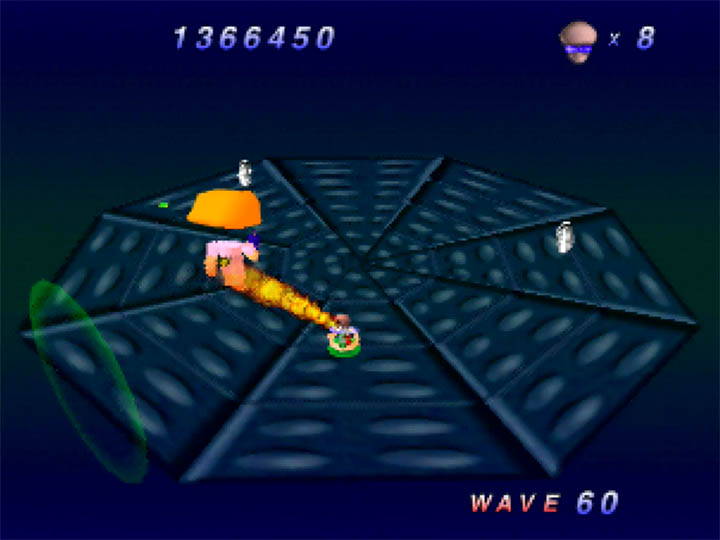 You can’t play together cooperatively, unless you opt to use two controllers to control the same character. And even then, it’s not as fun.

Only when a player dies does the other one get to have a go. Given how easy it is to get pretty far into the game before dying, this makes the experience quite dull for the waiting player. 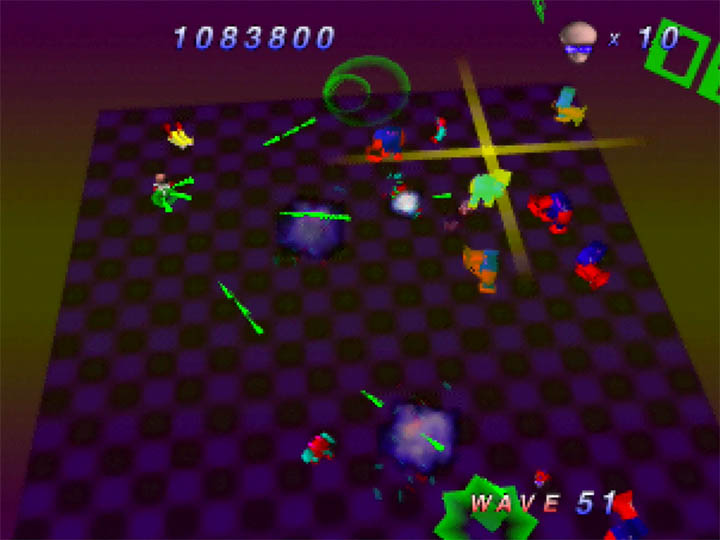 What it lacks in graphical detail, Robotron 64 makes up for with the sheer amount of enemies and hazards it shows on screen at the same time.

Characters are made up of very few polygons and sport little in the way of textures. It doesn’t really matter seeing as you only notice this when using the (impractical) close-up camera angle. 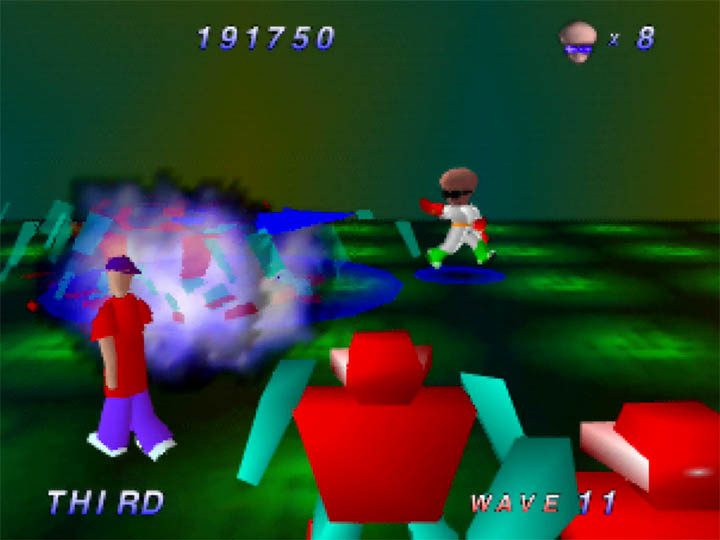 The reduced detail is no doubt Robotron 64’s way of keeping the gameplay smooth. And, for the most part it manages this with only slight frame-rate dips occasionally.

Playing on a CRT TV provides the sharpest experience. 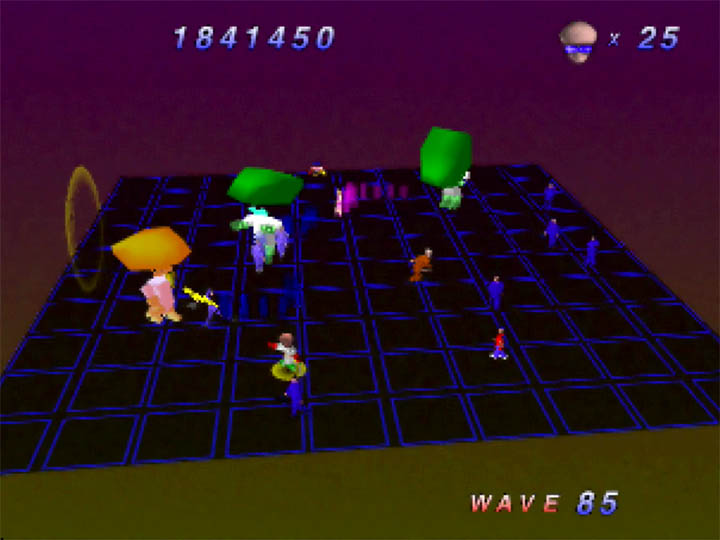 Even on an UltraHDMI N64 the visuals are blurry. But they’re least more vibrant than when playing on an LCD/LED TV through a standard composite connection.

Regardless of display, some characters and objects are very hard to see due to their size. In particular, humans are very thin – meaning the game may not be accessible enough for some players. 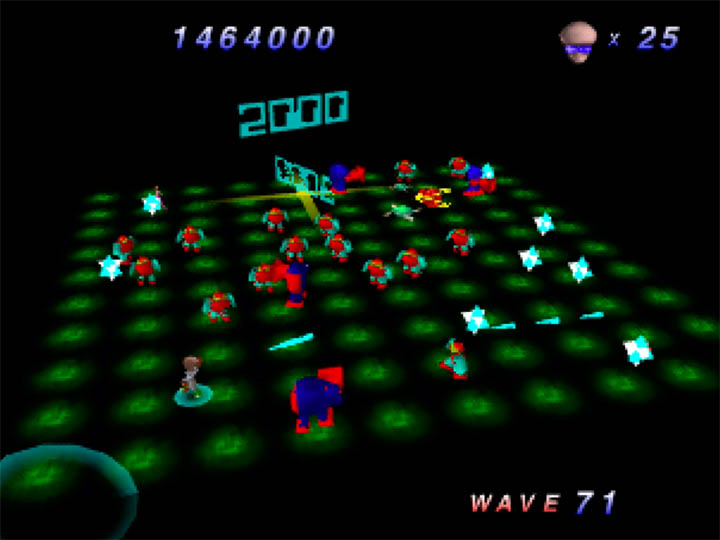 Over 20 years later, it’s easy to see why Robotron 64 was passed up by so many N64 owners back in the day.

The core gameplay is decent enough. But the game just takes too long before it starts to deliver even a moderate challenge.

And while there may be a whopping 200 levels, this doesn’t result in a better experience. That’s because the game recycles the same groupings of enemies over and over again – to the point where it starts to feel too repetitive even for a simple arcade game.

Still, if you’re a big fan of the genre then Robotron 64 may prove addicting and entertaining enough with its straightforward, yet often chaotic action. It also runs smoothly for the most part, which certainly helps make it easier to play today. 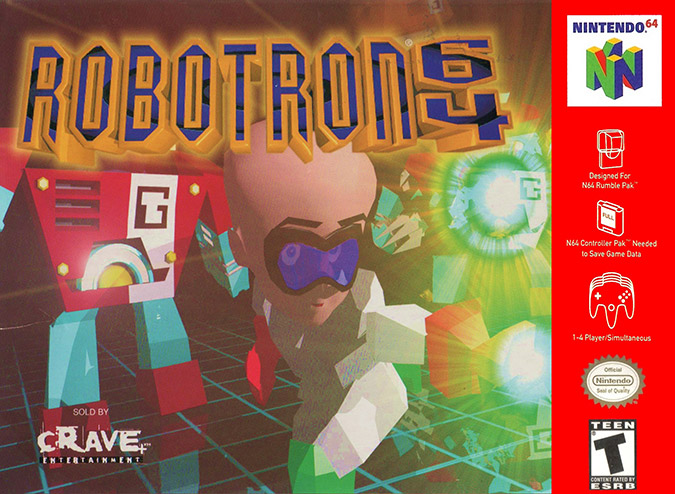