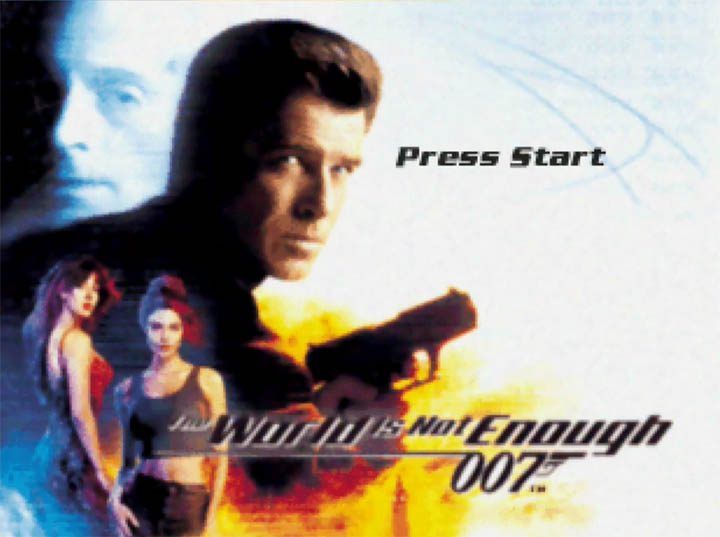 As the second James Bond game on N64, it followed the immensely successful GoldenEye 007 – the game that redefined first-person shooters on home consoles. 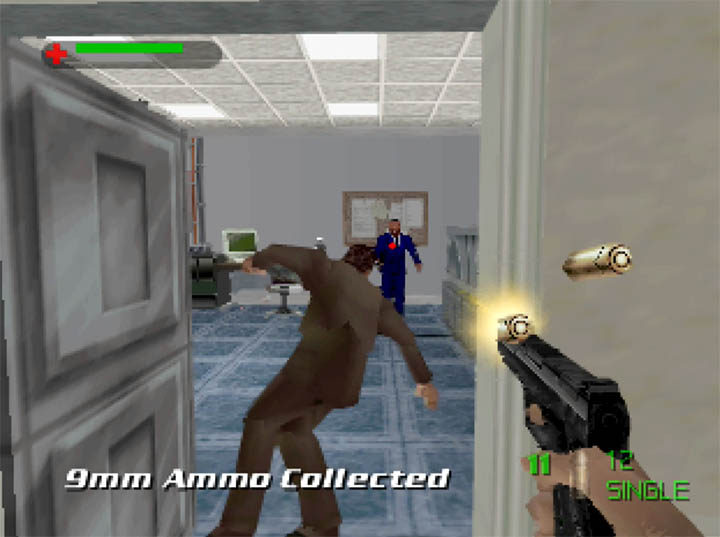 Needless to say, 007: The World Is Not Enough didn’t garner anywhere near the same attention. But in the eyes of many critics and players, it was a decent, technically accomplished game.

Based closely on the 1999 James Bond film of the same name, 007: The World Is Not Enough is a first-person shooter. 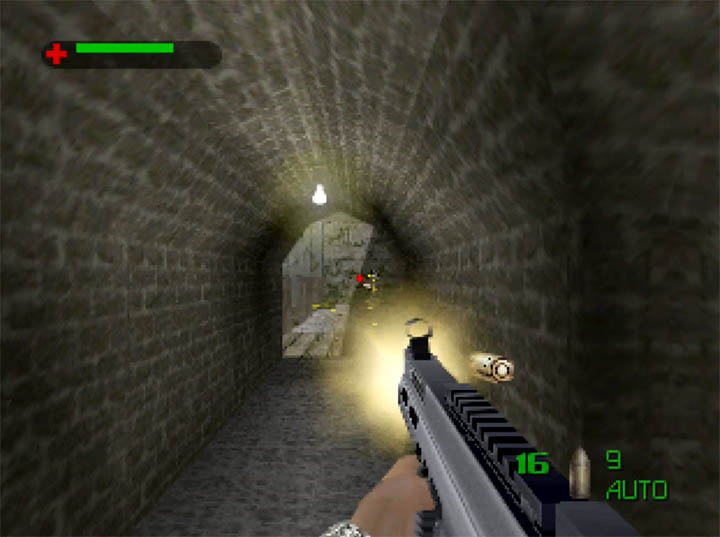 Renard previously abducted Elektra, King’s daughter, making his latest attack look like a personal vendetta. But not all is as it seems.

The game includes a 14-mission single-player campaign and a multiplayer versus mode for up to four players. 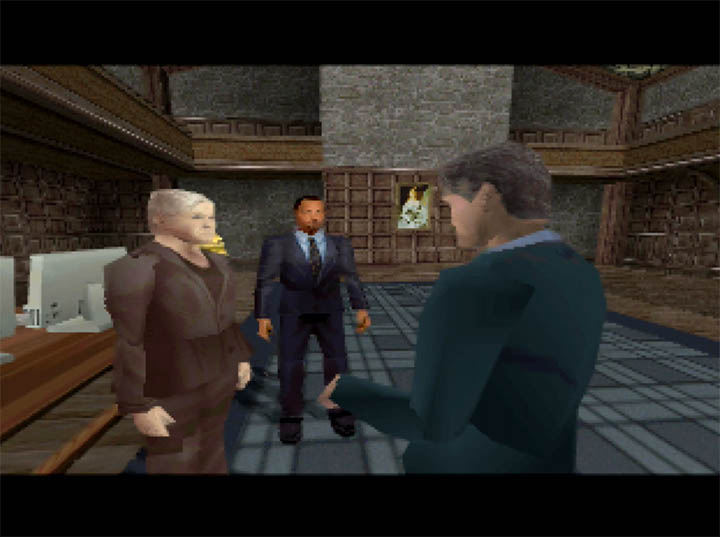 007: The World Is Not Enough’s campaign covers all highs and lows you’d expect from a James Bond flick.

Missions range from sedate stealth segments to frantic chases and all-out gunfights. Most of these have a linear layout, but do include objectives for you to complete along the way. 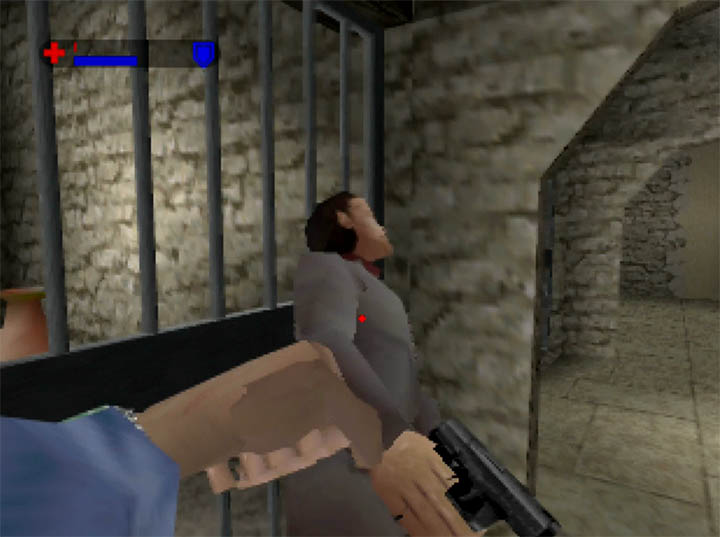 The campaign regularly switches between these different types of scenario. This gives it a good pace, while holding your interest for longer.

The game has three difficulty settings. In addition to guards being tougher and dishing out more damage, many missions have additional objectives at higher levels. 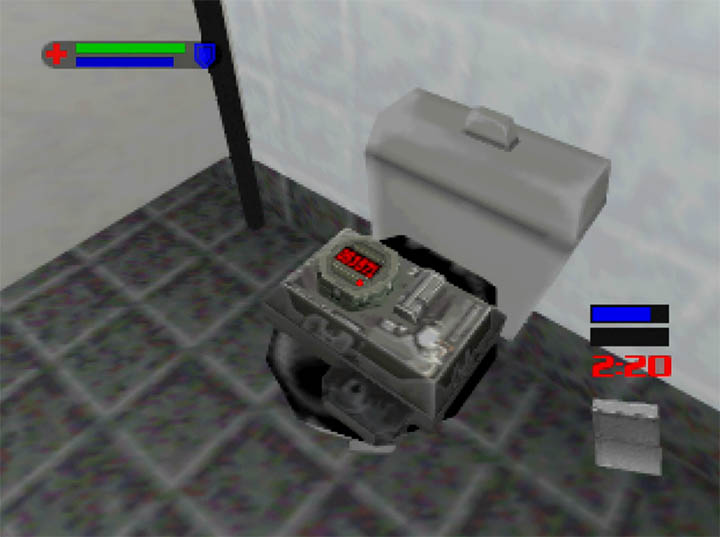 This gives the game some replay value, which helps given it doesn’t take particularly long to complete.

You can also unlock a lot of the multiplayer mode’s features by beating certain missions within a time limit. Thankfully, many of these challenges aren’t too arduous, not to mention they’re entirely optional.

Throughout the campaign, you have a wide range of weapons and gadgets at your disposal.

Because most of the guns are based on real-life equivalents, they operate more or less as you’d expect. You do, however, get to toggle between different firing modes on some weapons, which is a nice touch. 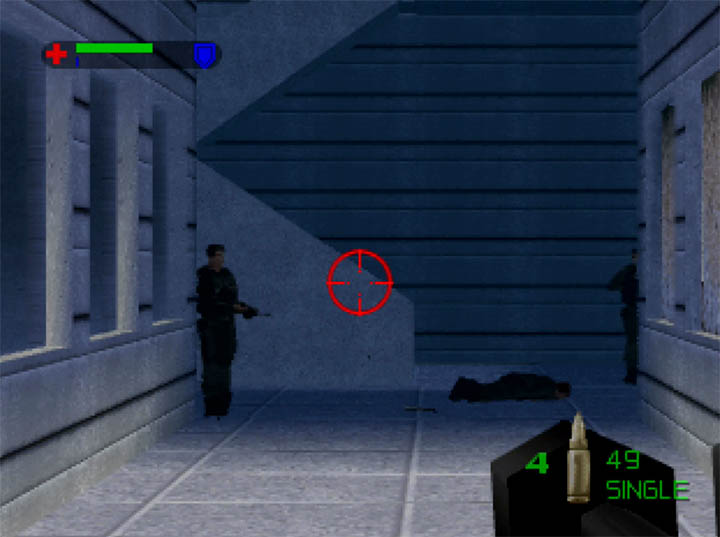 Unfortunately, the very basic enemy AI spoils the gunplay. The vast majority of Bond’s opponents will charge mindlessly towards you on sight.

They don’t use cover. They won’t retreat. And often they won’t even react to a comrade dying right before their very eyes. 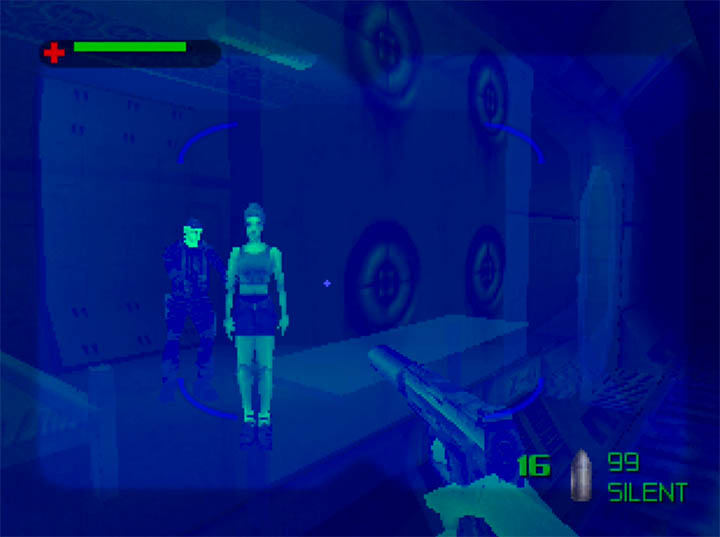 The gadgets, while plentiful, are underwhelming – a shame given they’re a defining feature of the James Bond franchise.

That’s because using them typically amounts to simply selecting them from the weapon menu and pressing a button. They rarely require any skill or technique.

The only standout item is the X-ray sunglasses, which apply a superb visual effect while enhancing the gameplay.

007: The World Is Not Enough tries to stay true to the film as much as possible.

Each mission has a briefing to fill in any gaps, and there are plenty of cutscenes throughout. 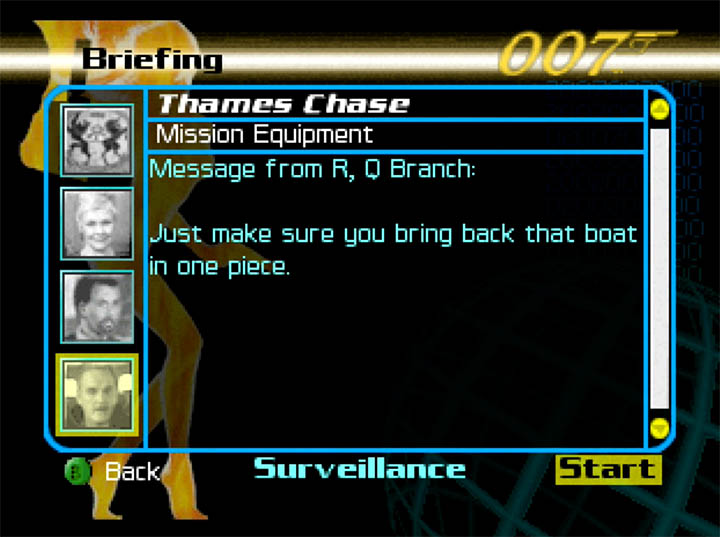 Despite this, the game still expects you to have watched the film and know key details from it. That’s because some objectives aren’t clear enough.

For example, to complete one mission you have to climb into the back of a car. It’s portrayed in the film, but not mentioned in the briefing or in-game dialogue at all. 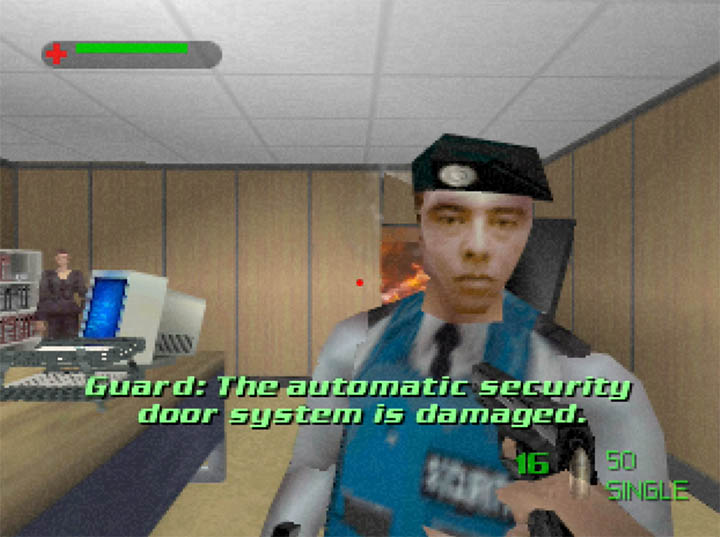 Such moments suddenly transform 007: The World Is Not Enough into an aggravating process of trial and error.

Failing a mission sends you back to the start of it. It’s frustrating enough to warrant looking up a walkthrough online.

Multiplayer by the book

Despite following GoldenEye 007, which was praised for its split-screen mode, 007: The World Is Not Enough’s multiplayer is surprisingly lacklustre.

The only notable improvement is the option to add AI bots. You can have up to three of these in a match to make up for absent human players.

But much like their single-player counterparts, these bots aren’t very smart at all. Upon encountering them, they’ll typically strafe a metre to the left and right until one of you is dead. 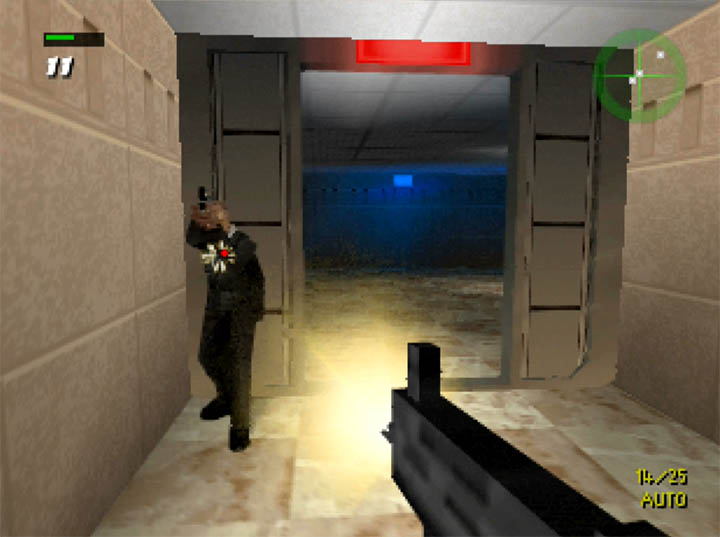 To be fair, there’s not a lot more they can do given how simple the maps are. Most of these arenas are based on locations from the game and/or film.

Yet, rather than have defining features, they’re mostly flat, generic spaces connected by corridors. While this discourages screen-cheating, it also means most maps are neither exciting nor memorable.

What does catch your attention, however, is the multiplayer mode’s absurd – and just plain stupid – restriction when selecting a character. 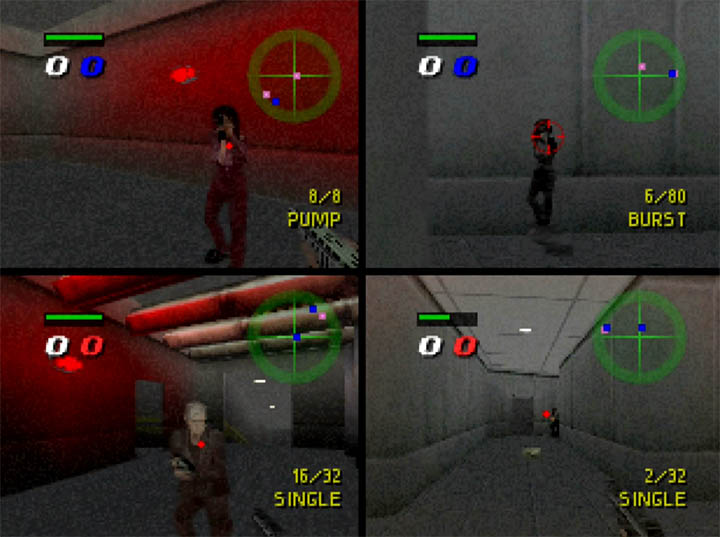 Each character has a good or evil alignment. And it’s important because good characters are not allowed to fight one another.

The game will literally throw up an on-screen warning and prevent you from starting the game. 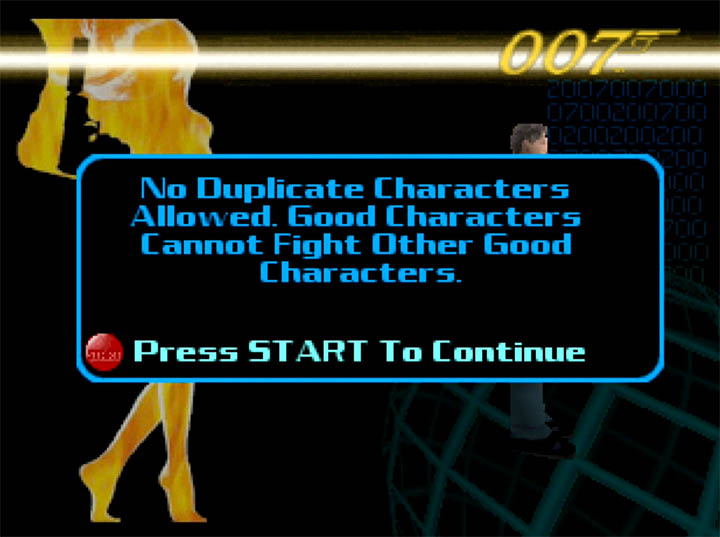 So unless you’re playing a team mode, a lot of the playable characters are off limits most of the time as only one player can be good in a free-for-all match.

It has a really detrimental effect on the experience. Especially as the game will let you go as far as trying to start the game before prompting you to change the line-up.

007: The World Is Not Enough’s technical performance

While it looks dated today, 007: The World Is Not Enough’s visual performance is still mighty impressive for an N64 game.

There are dynamic lighting effects. The draw distance is far-reaching and textures are surprisingly detailed. And while characters generally move and behave rather rigidly, Bond’s reload animations are nevertheless very intricate. 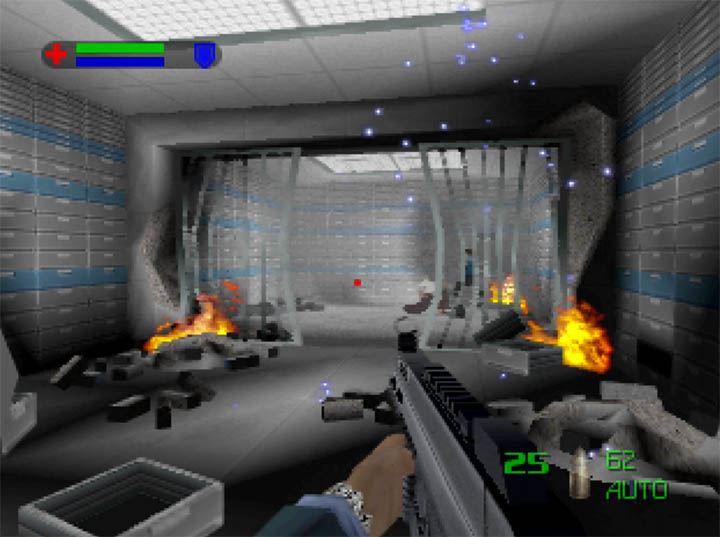 The game manages all of this while maintaining a mostly consistent frame rate.

If you have an N64 Expansion Pak, you can turn on Hi-Color mode. This adds more detail to the visuals, but the frame rate takes a noticeable dip in parts. 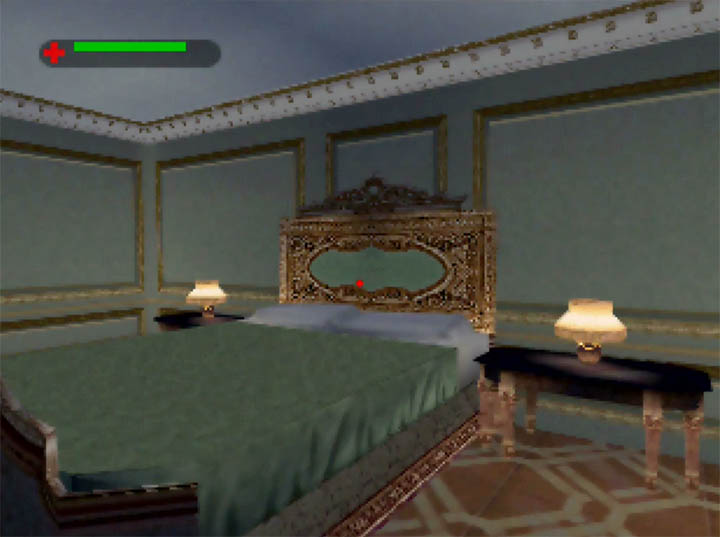 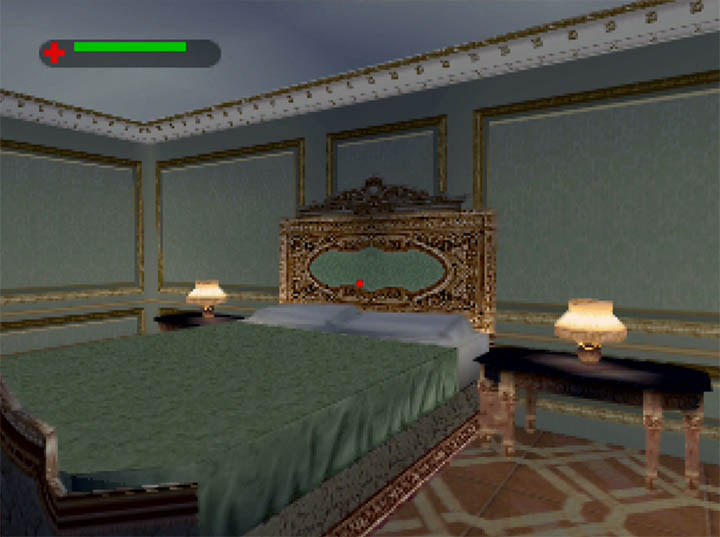 Similarly, the multiplayer performs admirably in terms of smoothness. The game even gives you the option to reduce the weapon detail.

It’s definitely worth turning it on in split-screen matches to help maintain performance. Especially when the detail is already reduced. 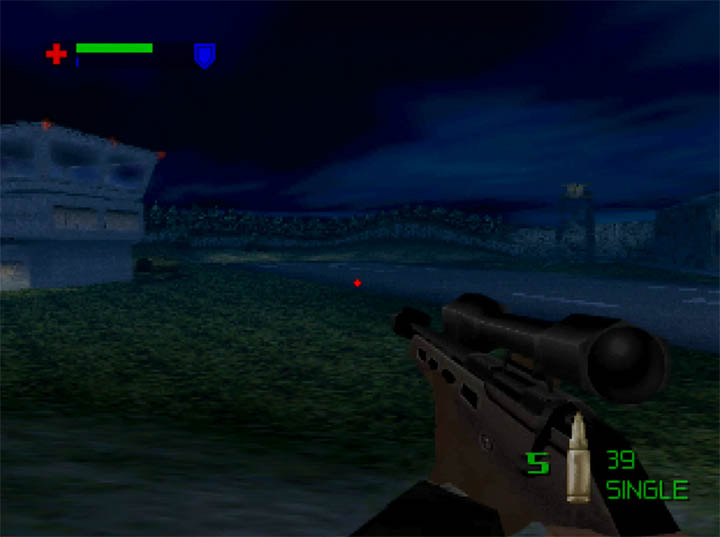 How much you can appreciate the graphical detail will also greatly depend on what display you use.

On large, modern TVs, the textural detail gets lost in the blown-up, fuzzy picture to the point where characters’ faces can become almost indistinguishable. Even the UltraHDMI N64 mod doesn’t fare well here. 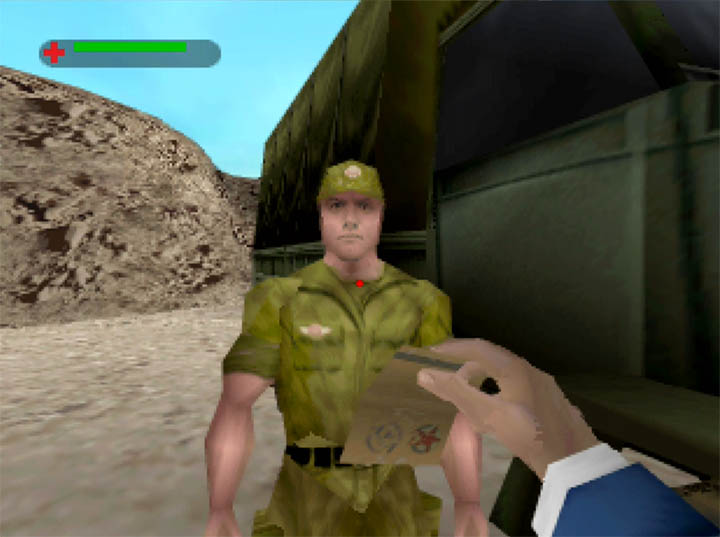 Do you expect me to talk?

007: The World Is Not Enough features fully voiced dialogue – unusual for an N64 game. It’s especially impressive when you take into account the game comes on a mere 32MB cartridge.

The voice actors are all impersonators, except for John Cleese who reprises his role as R. 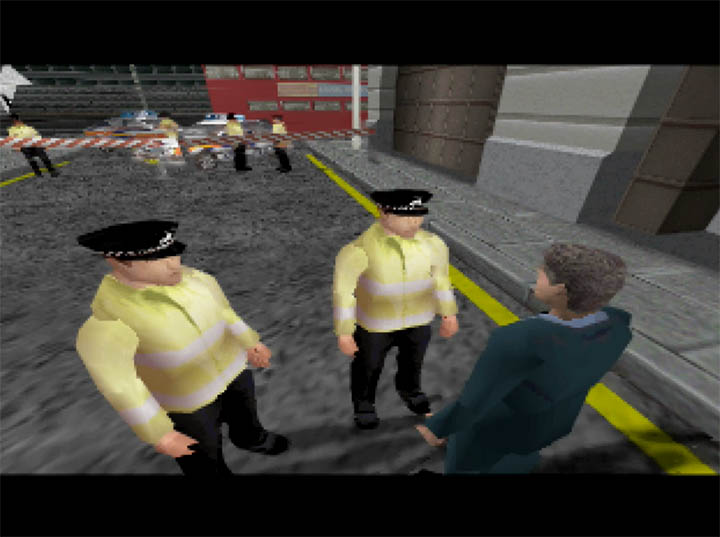 The quality of the delivery varies quite drastically. While Bond and Christmas Jones sound convincing enough, others are poor.

Valentin Zukovsky, a Russian mafia head, sounds French. Elektra King’s voice actor goes one step further by speaking in multiple accents – some of which are unrecognisable. 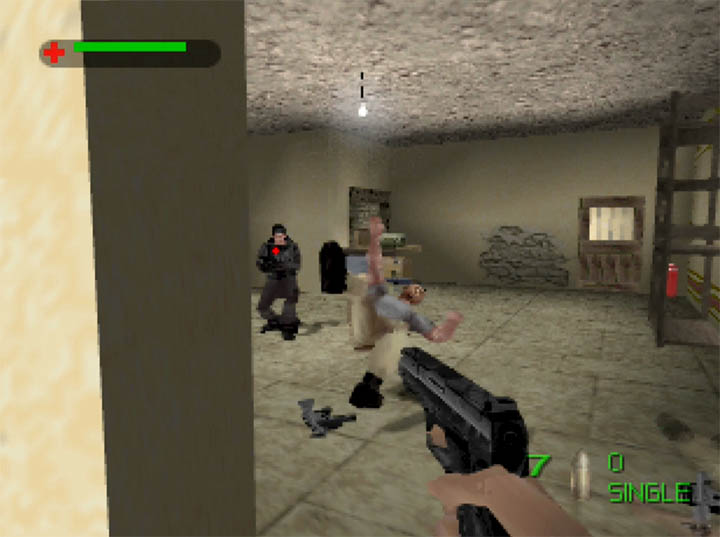 In control of the situation

So it’s just as well that 007: The World Is Not Enough offers multiple control configurations. The game also has a very generous auto-aim system. 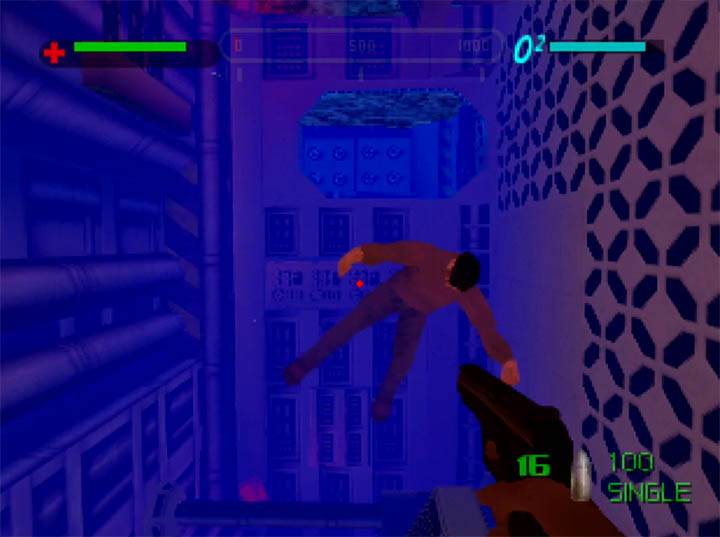 However, depending on which setup you use, you may lose the ability to do certain things. That or you have to do them another way.

For example, the default control scheme uses the C-up and C-down buttons to jump and crouch respectively. As a result, you can’t freely aim unless you aim down sights. 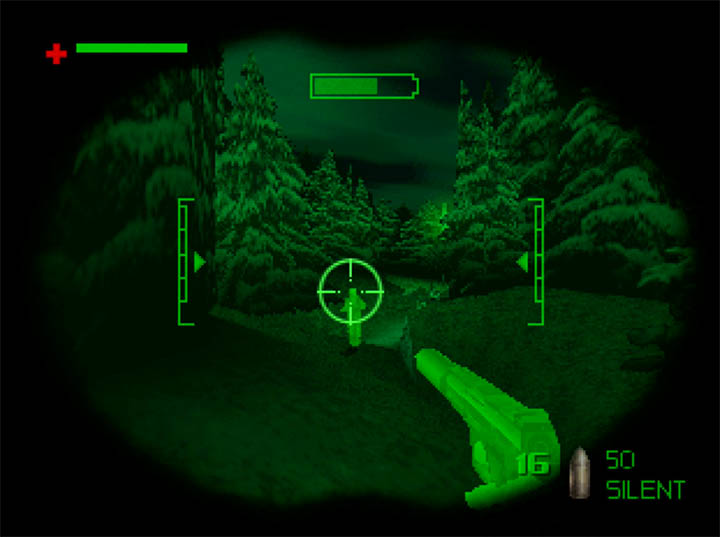 What about the configuration where you aim with the stick? Well, you now can aim freely – but the jump button is relegated to the D-pad.

Unless you have a very long thumb, you’ll most likely need to move your hand from the middle controller prong to the outer one.

While some setups are more awkward, they’re manageable with a bit of practice. More importantly, the controls are responsive, and aiming with the stick feels very precise. 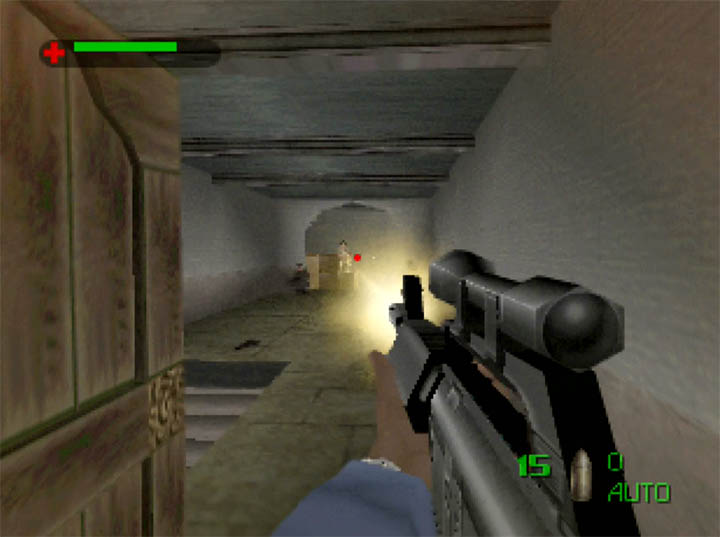 While it’s far from perfect, 007: The World Is Not Enough mostly holds up today due to its impressive technical performance. And if you’re a big Bond fan, then you’ll appreciate how it delivers an entertaining campaign while mostly sticking to the film plot.

It runs smoothly and performs better than many other N64 games – often looking better in the process. But how good the graphics look will largely depend on what display you’re using. 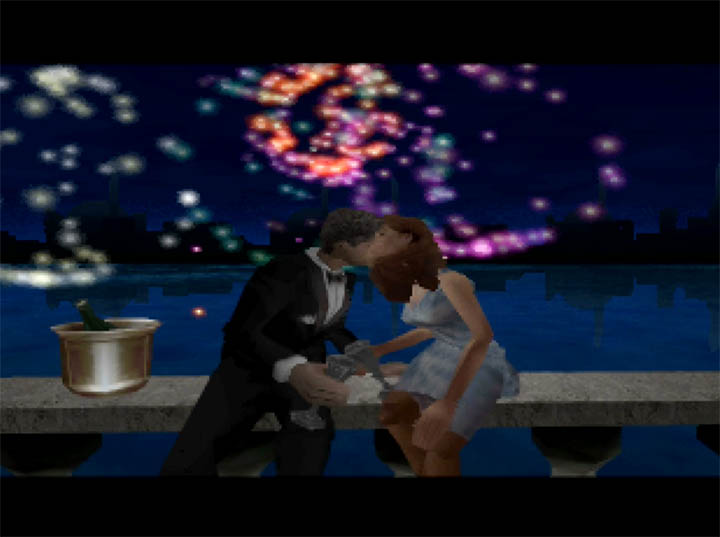 The single-player campaign offers a good amount of gameplay variety and has a good pace. Just don’t expect great things in the combat department, which suffers as a result of poor enemy AI.

The multiplayer is dull. Save for a couple of gems, most of the maps are horrendously generic and completely forgettable. And the ridiculous restriction when it comes to selecting your character is just another reason to pass up on it altogether.

It may not be remembered as fondly as GoldenEye 007. But 007: The World Is Not Enough is certainly worth giving another go nearly 20 years later. 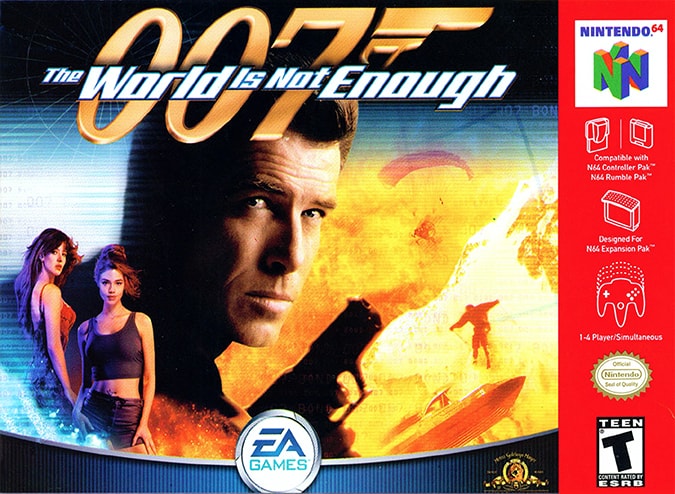