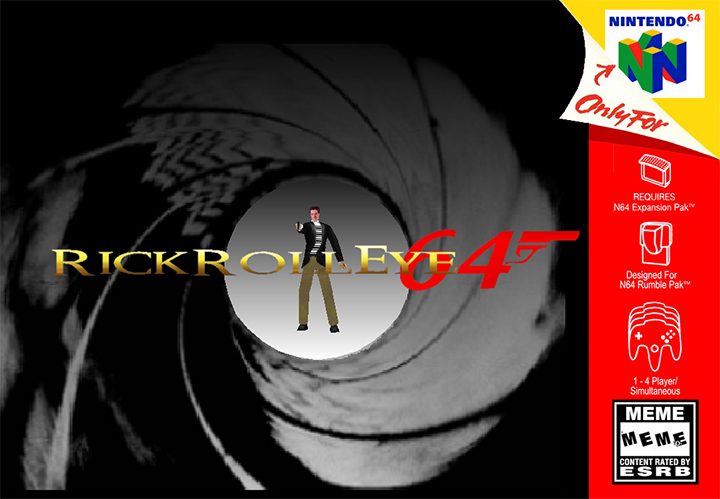 When we first saw RickRollEye 64 over at N64 Vault, we dismissed it as an April Fools’ joke. Turns out, we were very wrong. 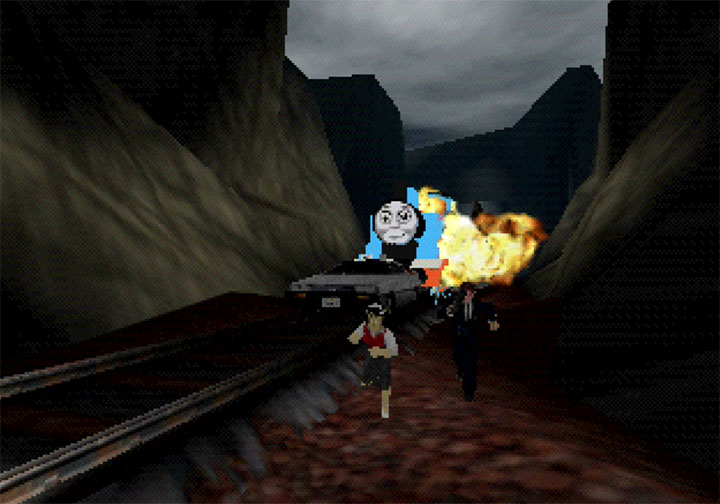 Drawing heavily on meme culture, the game includes a reworked campaign and a wealth of new features.

It’s utterly bizarre – and problematic in parts – but you may get a good chuckle out of it. Better yet, it works on an original N64 console.

Multiple universes have collided, turning the world into an eclectic playground of meme material. No one knows how or why this has happened.

Playing as British singer turned secret agent Rick Astley, it’s up to you to restore the world to some semblance of normality. There are 16 missions to complete across three difficulty settings. 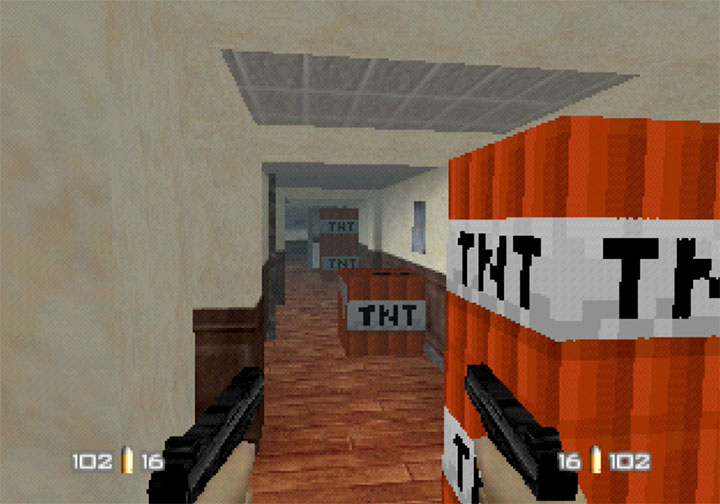 From the get-go, RickRollEye 64 is a nonsensical mash-up of pop culture references. None of it fits together – and it’s clearly not meant to.

For example, take the first mission of the game. Here, you have to escort the DeLorean from Back to the Future through a miltary base in Aspen, Colarado. The enemy guards are packing CV-47 assault rifles from Counter-Strike. 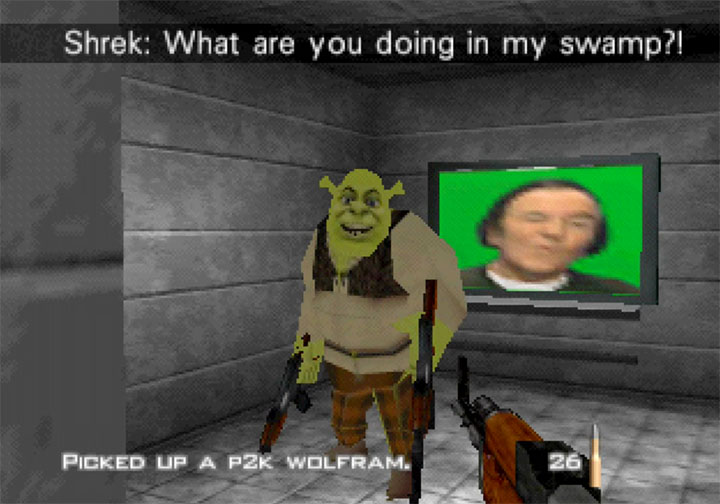 Oh, and you also have to kill Shrek. All while a MIDI version of Smash Mouth’s All Star plays in the background. 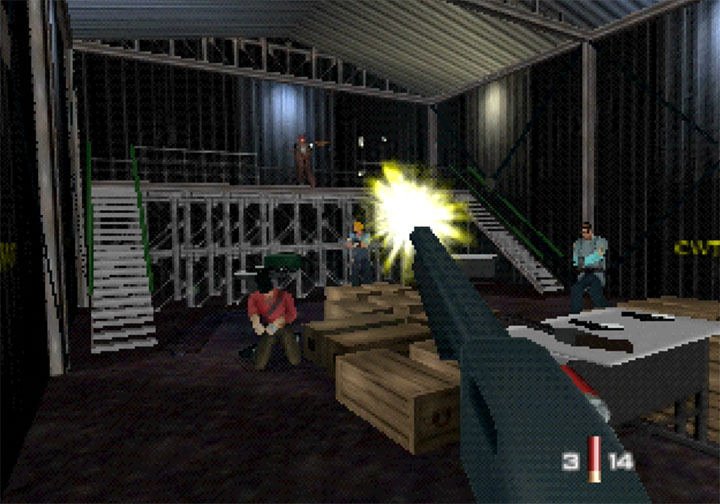 As barmy as it is, RickRollEye 64’s campaign mode nevertheless feels familiar.

That’s because it re-uses a lot of GoldenEye 007’s original design as a core template. It’s not a total conversion like Goldfinger 64. 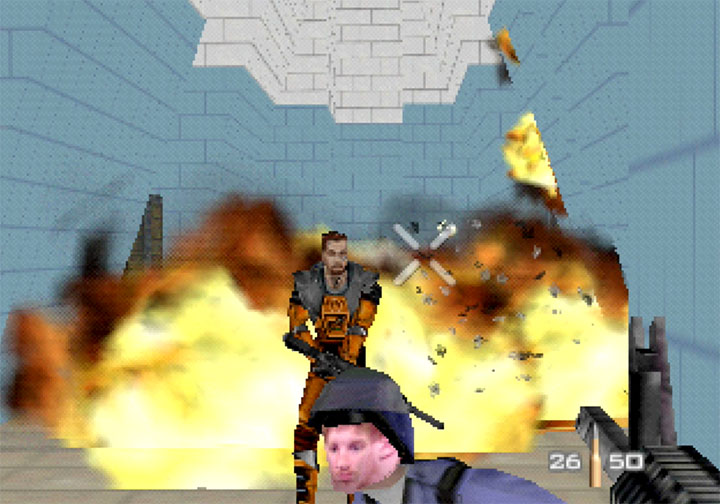 Each mission features new textures, sounds, weapons and objects. Some environments are mirrored, which is certainly a good way to confuse GoldenEye 007 veterans.

In some instances, the geometry has been altered and new areas have been added. Some of the new character models are really impressive too. 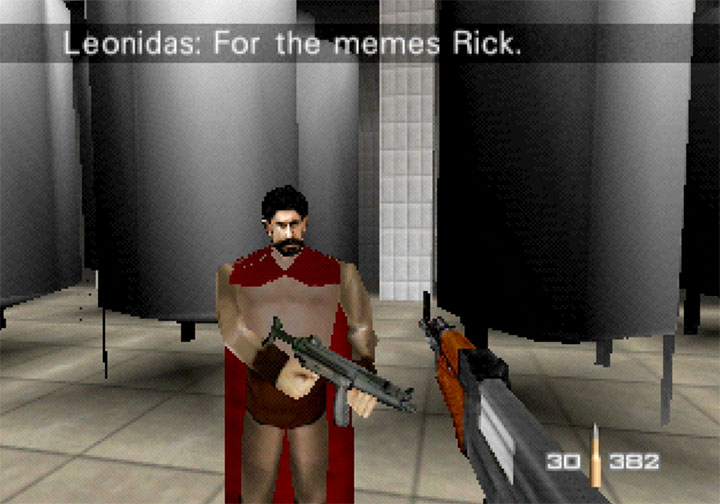 But otherwise the environments largely sport the same layout, and the mission objectives are practically identical on a gameplay level. You also witness more or less the same gameplay events, but within the context of RickRollEye 64’s meme-filled setting.

So, instead of Trevelyan betraying you, it’s actor Gerard Butler. And rather than Natalya mindlessly running into your line of fire, it’s Kitty Katswell from the kids’ cartoon series T.U.F.F. Puppy. 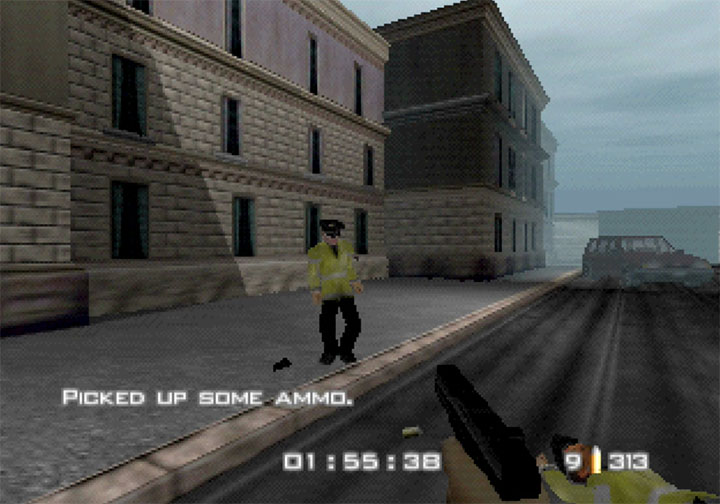 You may find some aspects of the game controversial or in bad taste. For example, some missions involve shooting British police officers or US Army troops from World War II.

That said, there’s nothing that hasn’t already been done in other video games.

RickRollEye 64’s story is serviceable at best. And that’s mainly because all the dialogue and narrative text is so poorly written.

We presume English isn’t Johnny Thunder’s first language, and to be clear that’s in no way a criticism. 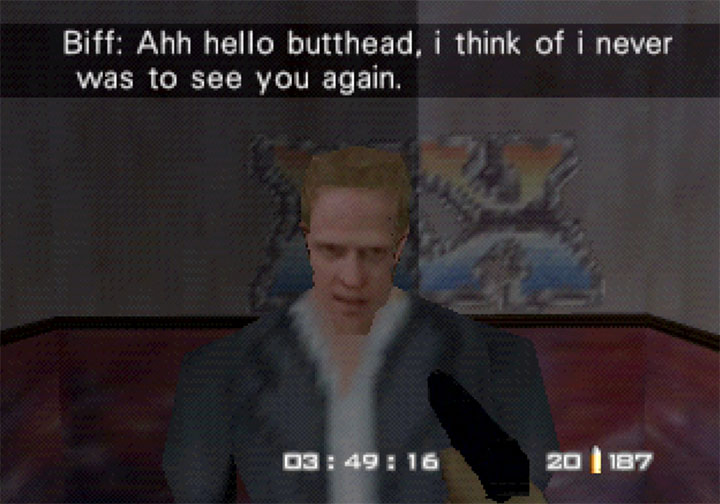 Regardless, understanding what’s being said most of the time is a struggle. Characters say their signature catchphrases, but usually as part of a larger garbled message.

It also means the game’s content is somewhat superficial. Memes don’t serve the story, and rather they’re just there for the sake of it.

It would’ve been nice for famous memes to tie into the narrative in a more meaningful way.

Still, there’s something compelling about playing through RickRollEye 64 – finding all the meme material has an addictive quality to it. Not to mention that some things have been implemented in really novel ways.

For example, Half-Life’s first-aid stations make an appearance, and they function just as they do in the original game.

RickRollEye 64 also comes with its own take on GoldenEye 007’s classic multiplayer mode.

It features new maps and weapons, and gives you the chance to set up some truly bizarre face-offs. 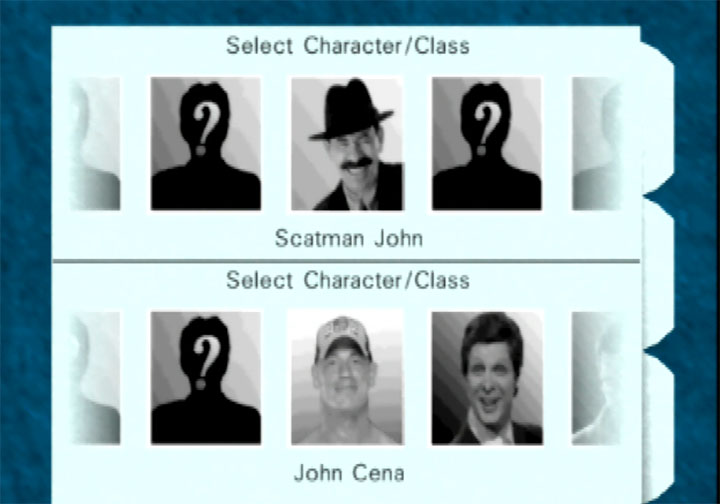 Ever wanted to know who would win in a fight between Scatman John and Big Smoke from Grand Theft Auto III: San Andreas? Well, now you can find out.

There are 11 multiplayer maps, although only nine of these are playable with three players. That number reduces to five with four players. 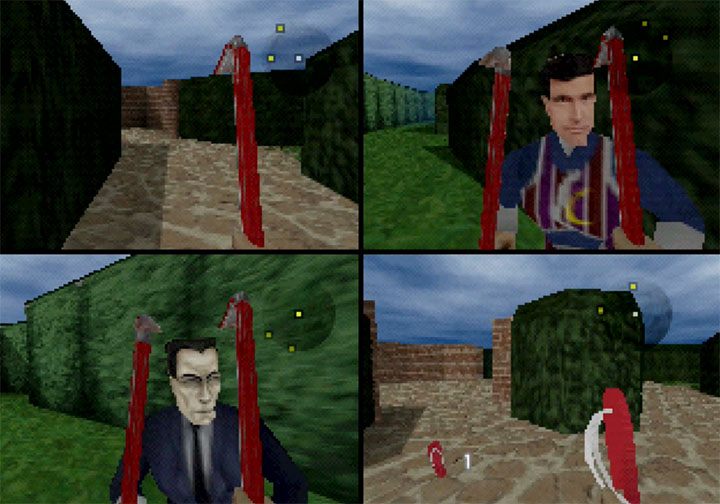 How can I play RickRollEye 64?

You can download the RickRollEye 64 patch for free from N64 Vault.

Then you need to patch it to an NTSC ROM of GoldenEye 007. You can do this using Delta Patcher. 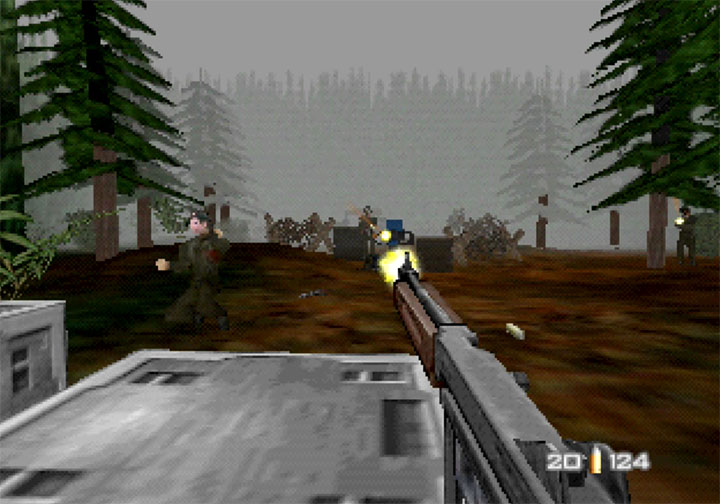 The download also includes box and label art, should you wish to make a physical copy for personal use.

To play on original hardware you will need an EverDrive 64 and an N64 Expansion Pak. 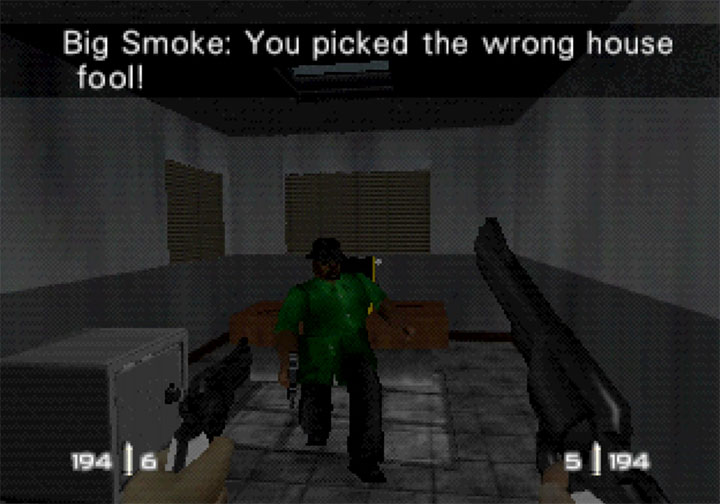 The game frequently glitches and is prone to crashing. That said, it’s fully playable on an N64 console.

If you encounter a clipping issue where the level partially disappears, move back to the area that is visible.

RickRollEye 64 is also compatible with PC and Wii N64 emulators, but not Android.

Should you roll with Rick?

RickRollEye 64 is a mixed experience. It offers a lot of new content and is definitely a very surreal departure from GoldenEye 007.

At the same time, it’s a bit buggy, and the writing is shoddy to the point that it negatively impacts the rest of the game.

Still, if you’re after a bit of lighthearted fun and some dank MIDI tunes, then RickRollEye 64 is worth giving a go. 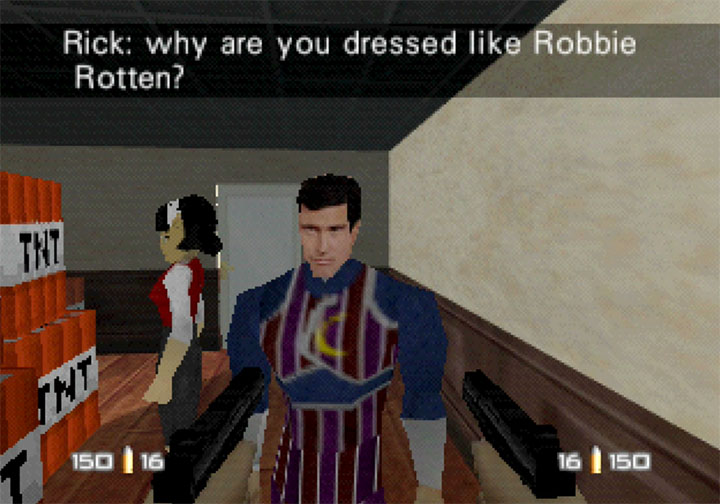