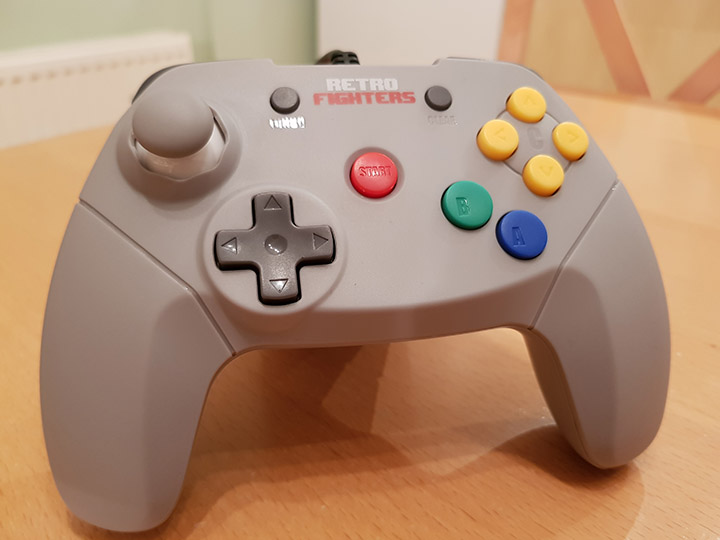 Retro Fighters’ Brawler 64 controller took Kickstarter by storm when it was announced back in 2017.

After all, finding official N64 controllers in good shape 20 years later is becoming increasingly difficult. So it’s easy to see why the Brawler 64, with its modern design and low price point, quickly gained popularity.

In fact, the Brawler 64 has been so popular that Retro Fighters recently released the controller in a range of transparent colours.

But does it live up to the hype? Or does it fall short like most unofficial N64 controllers? 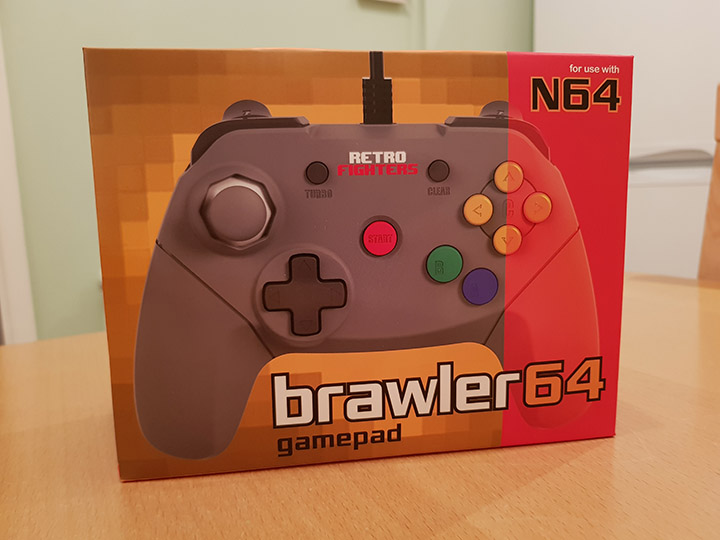 We don’t really know what that means. But we assume it (inaccurately) refers to some or all of the following: 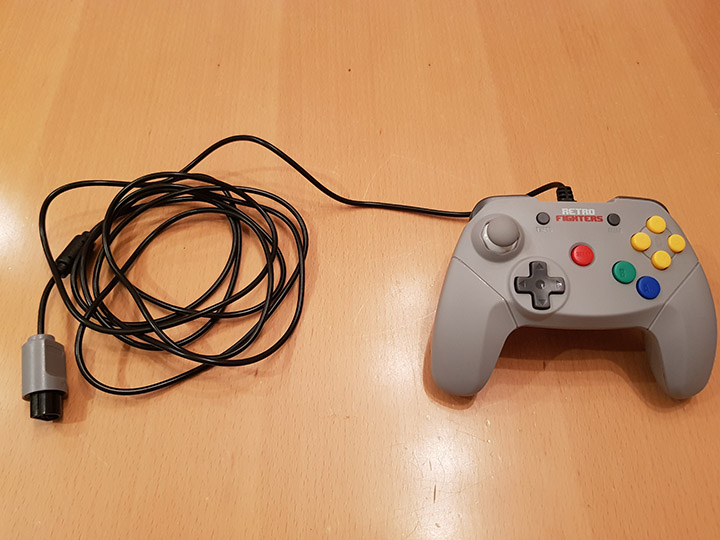 In addition, the Brawler 64 controller’s cord is about a metre longer than that of the official N64 controller.

While the added length is a nice bonus, the same can’t be said for the cord’s connection socket. That’s because it’s a little too large.

The good news is that it fits into the N64 console’s controller port. But it’s incredibly tight, to the point where it scuffed the port of every N64 we tried it with.

So don’t use it with any limited edition systems you may have. 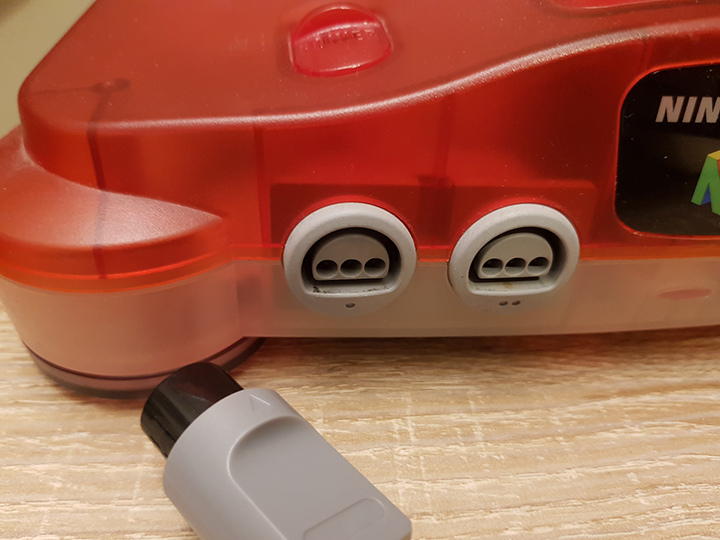 The Brawler 64 controller’s most noticeable quality is its two-prong design.

It’s similar to most modern game controllers, and does away with the confusing trident layout of the original pad.

The controller has a good size to it. In terms of width, it’s about the same as the original N64 controller.

It’s wider than the Hori N64 Mini Pad, so it’ll feel a lot more comfortable than that controller if you have large or long hands. 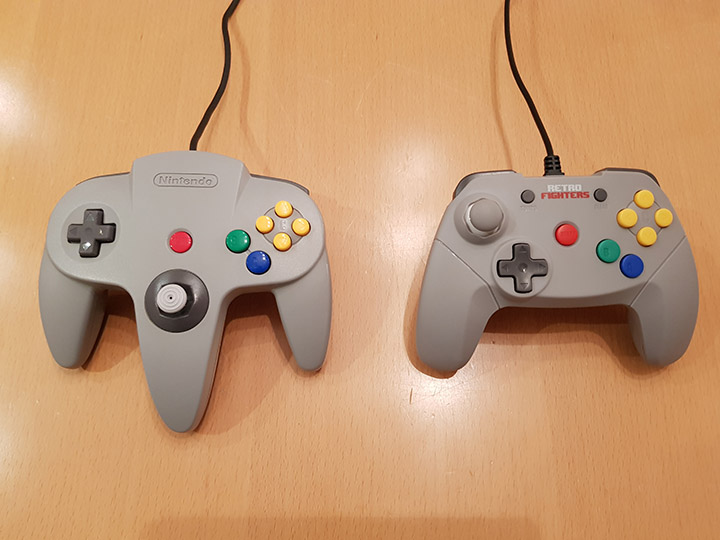 The expansion port on the underside takes up a lot of space. However, it’s unlikely to get in the way so long as you rest your index fingers on the shoulder buttons.

It’s remarkable just how light the Brawler 64 controller is. It weighs just over 140g (excluding the cable), making it around 50g lighter than the official N64 controller.

This weight difference is ideal for when using a Rumble Pak, which adds a a noticeable amount of heft. 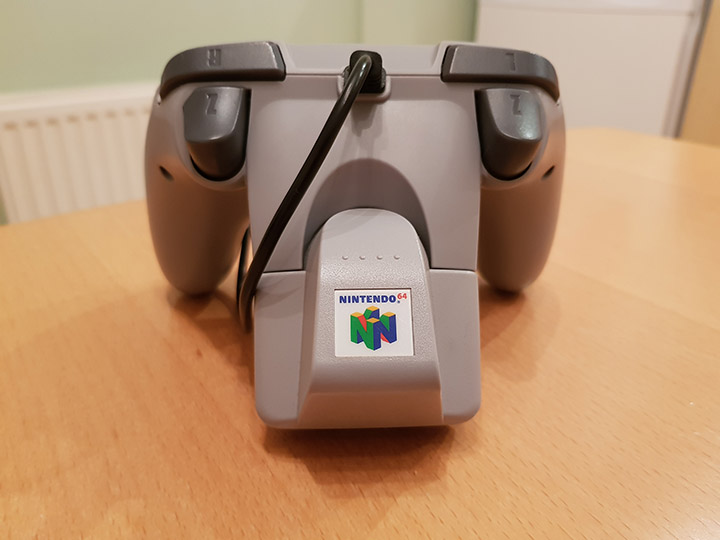 Another thing that sets the Brawler 64 controller apart from most N64 controllers is its joystick.

The stick is is similar to one you’d find on a modern game controller. It’s fatter and shorter than the official controller’s joystick, and the head is smooth rather than textured.

So if your hands tend to get sweaty when gaming then you may find your thumb slips more easily.

The joystick sits within an octagonal gate similar to the original pad. It’s a welcome touch that makes lining up directional inputs that little bit easier.

The original N64 controller’s joystick has an inherent design flaw that causes it to wear and become loose with use. Thankfully, the Brawler 64 doesn’t suffer from the same issue thanks to its more modern design.

We tested it multiple times with joystick-heavy games such as Super Smash Bros. and Mario Party‘s dreaded stick-spin games. And thankfully we’ve yet to see any wear or looseness.

But there’s a downside to the Brawler 64 sporting a more modern joystick. 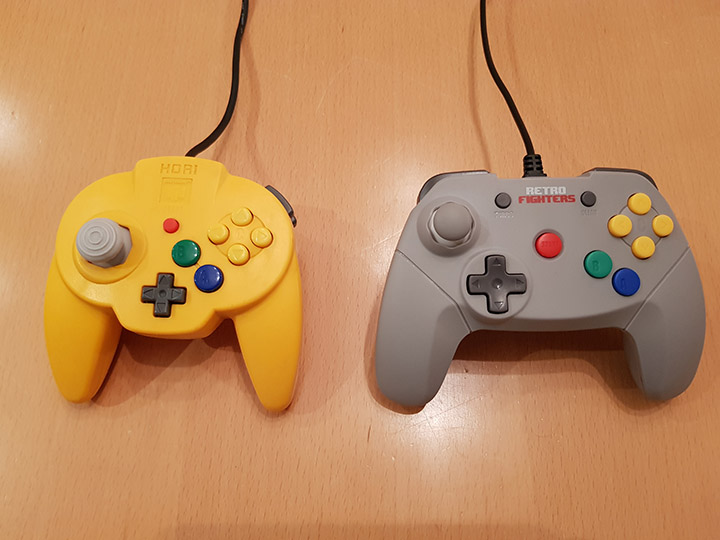 For some games it’s not an issue. For example, 3D platformers tend to be more than playable. Also, the stick’s extended range can be advantageous at times.

For example, it can allow you to turn more tightly than you should be able to in racing games.

But any game that requires a very precise level of control can be very difficult to play.

Using free aim in GoldenEye 007 or Perfect Dark is a real struggle compared to the original pad.

And while it fares better than the N64 Hori Mini Pad, the Brawler 64 just isn’t accurate enough for F-Zero X.

There’s no quick and easy way to determine whether the Brawler 64 works well with any one game. The only way to find out is to test it.

It’s a shame, as it stops the Brawler 64 from being an outright replacement for the original controller.

One of the best things about the Brawler 64 controller is the location of the D-pad. It sits just to the bottom right of the joystick, making it easily reachable.

And unlike the N64 Hori Mini Pad, this D-pad is full sized. 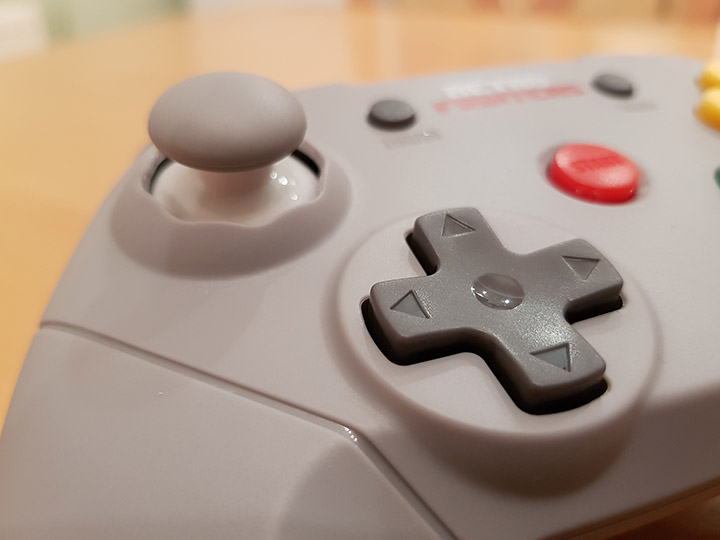 It’s ideal for games which primarily use the joystick, but also use the D-pad for things like weapon selection.

This revised layout means control setups based around the left and middle prong of the official controller aren’t ideal.

Thankfully, Pokémon Stadium is the only N64 game to enforce this configuration (and it’s only for the Ekans’ Hoop Hurl mini-game).

Overall, the D-pad is very responsive and perfectly fine for 2D games. For example, we had no input issues when testing it with Killer Instinct Gold and Mischief Makers.

Longtime N64 fans will be glad to know that the Brawler 64’s button layout is very similar to the original controller.

However, the gap between the A and B buttons and the C buttons is a little wider. While it’s not a huge change, it does impact how you play certain games.

For example, it made switching between primary and secondary weapons in Star Wars: Rogue Squadron less efficient.

The C buttons are also larger, although not by much. The Brawler 64’s packaging claims this makes them better for fighting games.

Personally, we don’t agree – the original C buttons were perfectly fine to begin with.

More importantly, the N64 is not known for its fighting games. In fact, it’s one of the console’s weakest genres, so it’s not much of a selling point anyway.

All of the face buttons and the L and R buttons make a loud clacking sound when pressed. This has no bearing on the controller’s functionality, but you may find it annoying or distracting. 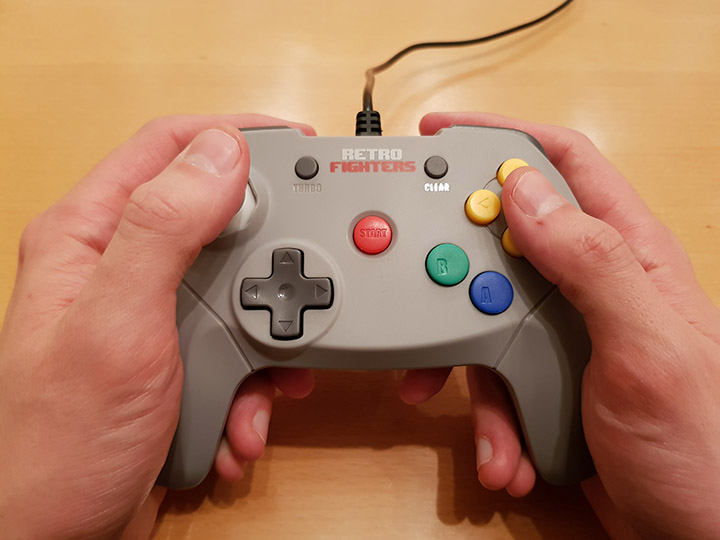 The Brawler 64 has a shoulder button and Z trigger on either side of the controller.

This setup is ideal, as many games use the Z and R buttons at the same time (for example, aiming in GoldenEye 007). Using the right Z button with the R button is fine, so long as you don’t mind using your middle finger as well.

Bizarrely, the Z buttons are spongy – similar to analog triggers on modern controllers.

This makes them feel satisfying to press. But otherwise it’s a completely unnecessary revision.

For one, there isn’t a single N64 game that supports analog button inputs.

And you have to press a trigger in about halfway before it even registers. As a result, it’s both slower and less reliable than a standard Z button.

Earlier versions of the Brawler 64 controller had a design flaw. Pressing down the L button would interfere with the joystick’s movement.

This has been fixed in later versions of the controller (including the one we tested).

Retro Fighters released replacement parts to fix this issue to Kickstarter backers. Just be mindful if you buy one of these pads secondhand – the seller may have an older version that they didn’t fix.

The Brawler 64 comes with turbo functionality. Just hold down the turbo button, press the button of your choice and it’ll then behave accordingly.

You can turn it off again by hitting the clear button.

There are other N64 controllers out there that offer more in terms of turbo and auto functionality. Still, this is a nice bonus feature to have on the Brawler 64 controller. 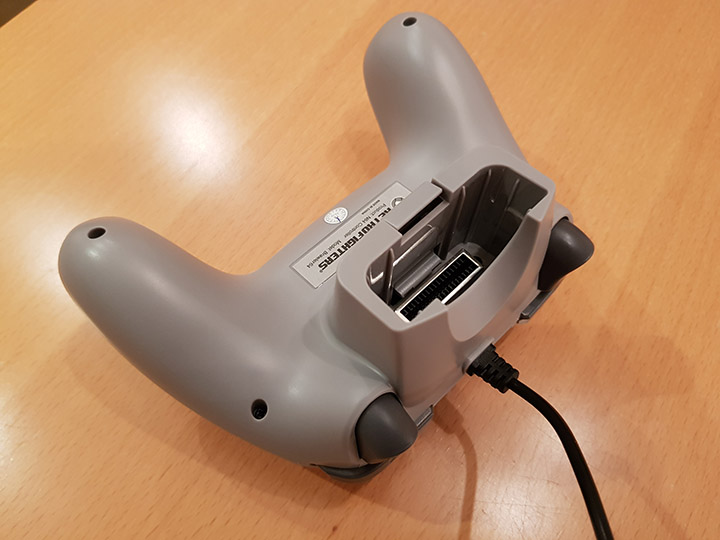 The expansion port on the Brawler 64’s underside is compatible with memory cards and the Rumble Pak.

It doesn’t support the Transfer Pak. In fact, the shape of the port prevents you from even inserting the accessory. This really isn’t the game pad for Pokémon Stadium fans. 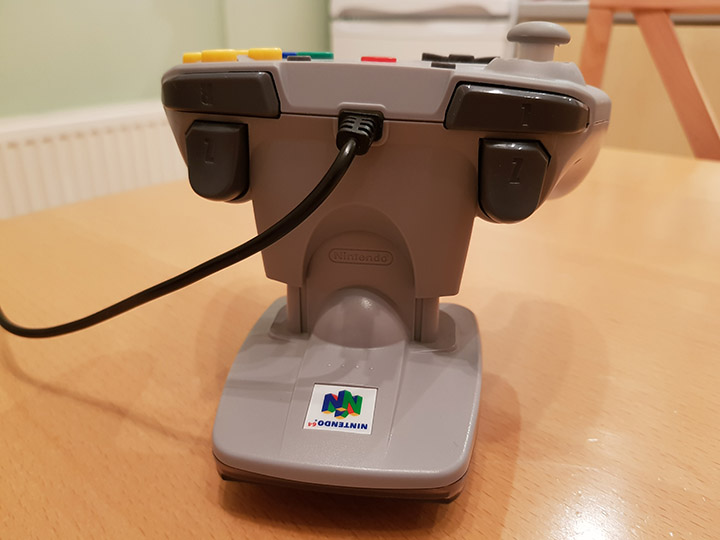 But it’s not too much of an inconvenience given so few N64 games use the Transfer Pak.

We didn’t encounter any issues when using the accessories that do work.

The Rumble Pak sits securely and won’t come loose. And we didn’t come across any connection issues when testing a memory card. 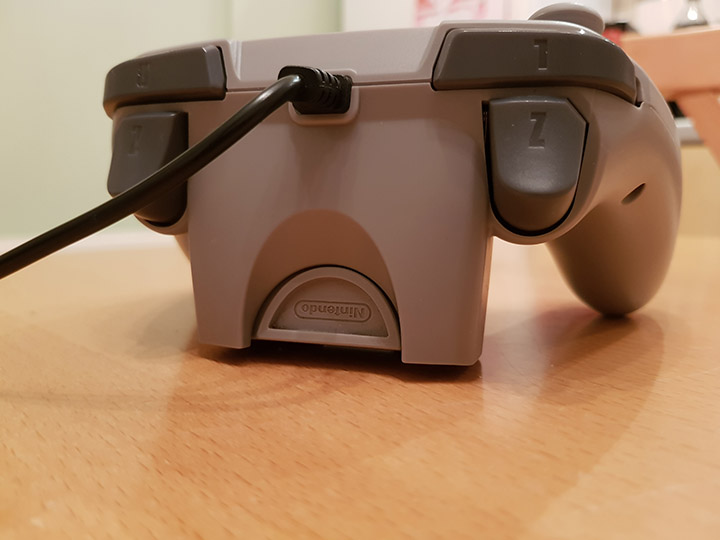 The Brawler 64 is not the perfect replacement N64 controller. And you could argue it doesn’t deliver on its promise of offering “next-generation” features.

The joystick is its biggest flaw. While it doesn’t suffer from the same wear-and-tear issues as the original controller, it isn’t nearly as accurate. It makes some games very difficult to play.

And the spongy Z triggers are an unnecessary and ultimately useless addition.

At the same time, the Brawler 64 is comfortable to hold and has a great D-pad placement. The face button layout is more or less identical to the original controller, meaning you don’t have to relearn how you play N64. And it’s got a longer cord and turbo functionality as added bonuses.

It’s also cheaper and easier to get hold of than an N64 Hori Mini Pad – the Brawler 64’s closest competitor. (Although expect to pay a lot for postage and packaging if you live outside the United States and order from Retro Fighters directly.)

That all said, you’re better off getting hold of the Brawler 64 wireless controller (released January 2021), which is a huge improvement over this version.

Overall, the Brawler 64 is a decent N64 controller that’s good enough most of the time. And given how hard it is to find N64 controllers in good condition nowadays, that’s by no means a bad thing.