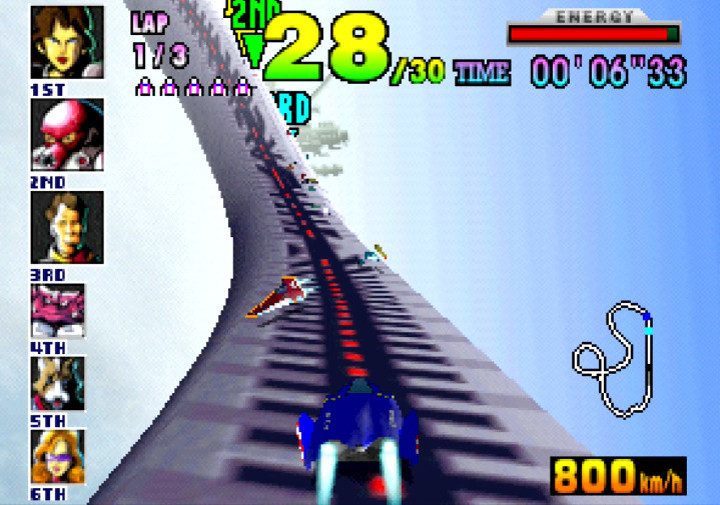 F-Zero X wowed gamers and critics alike with its incredibly fast gameplay in 1998.

However, such impressive speed and gameplay performance came at the cost of the game’s visuals. 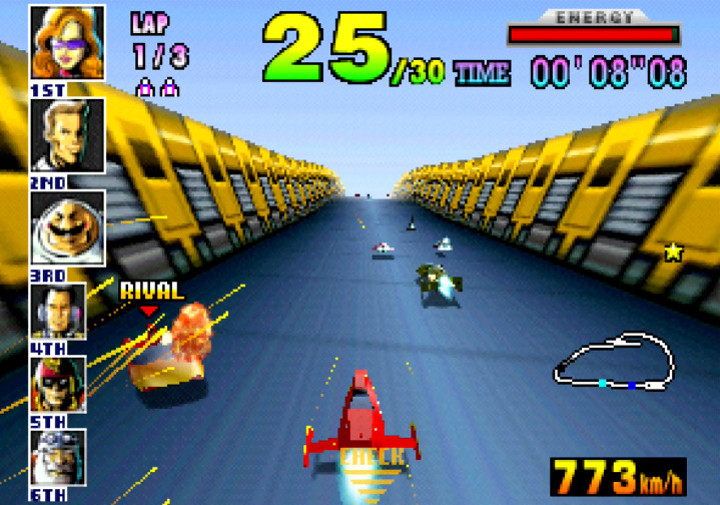 It was an unusual move by Nintendo during a time when graphics meant everything. Nevertheless, it paid off – F-Zero X went on to become a million seller.

20 years later, F-Zero X understandably looks even more basic. But that really doesn’t matter when it’s one of the most exciting and playable experiences on N64 today. 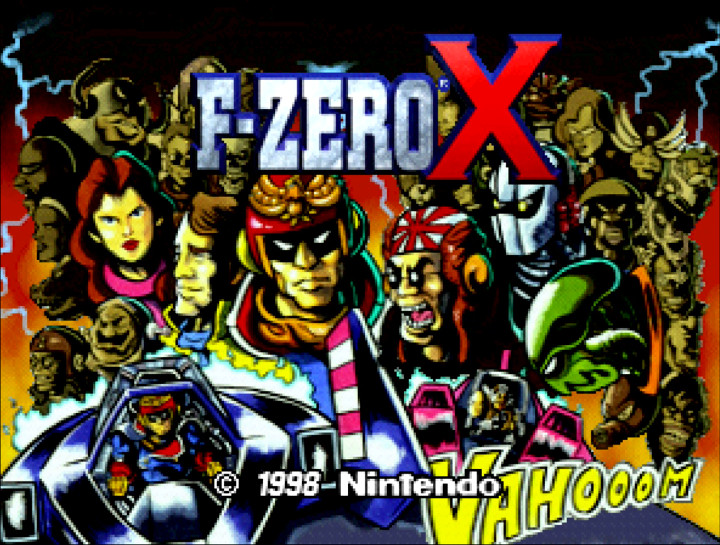 F-Zero X is a futuristic racing game set in the 26th century. You and 29 other pilots compete against one another in ultra-fast hover cars that can surpass the speed of sound.

Each of the 24 tracks is suspended high up in the sky and comes with its own features and hazards. You’ll zoom through half pipes, 360-degree tunnels, loops, and launch over massive jumps. 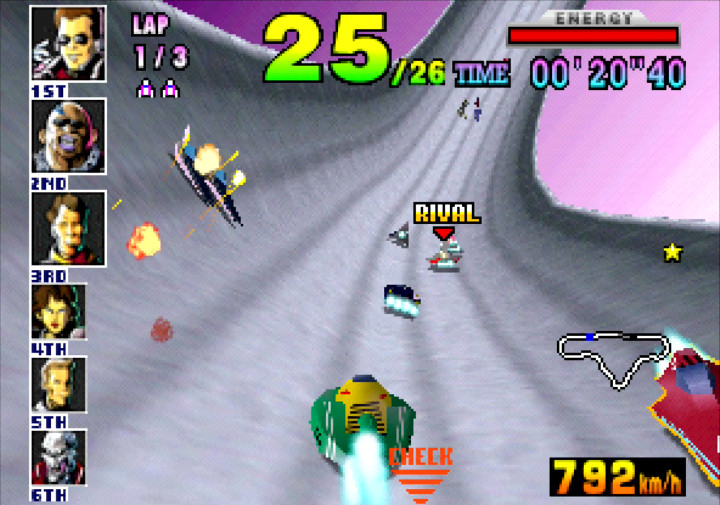 Your goal is to come first in each of the four Grand Prix cups across four difficulties.

Good driving skills are essential, but you’ll also need to adopt vicious and unsporting methods to dominate the leaderboard.

F-Zero X is a blisteringly fast game. You really fly along the track, to the point where it can feel a little overwhelming at times.

Unusually for an N64 game, F-Zero X runs at a consistent 60 frames per second. It’s even more impressive when you consider there are 30 hover cars zipping around the course simultaneously. 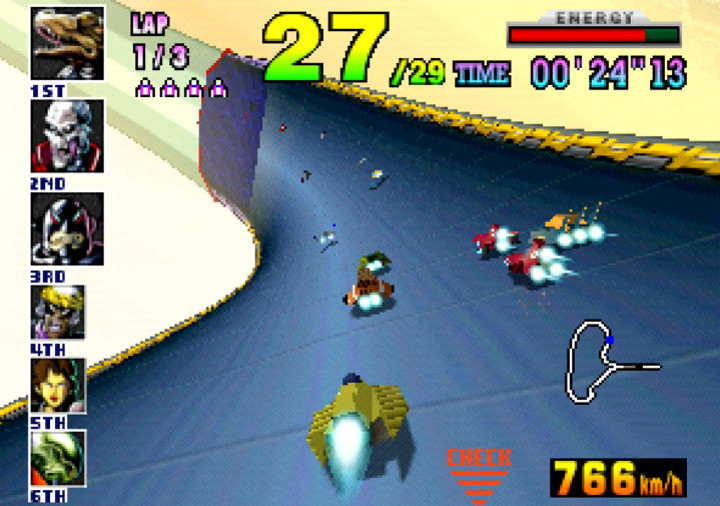 However, such impressive speed comes with one major drawback: the graphics are very basic. Vehicles are low poly and sport barely any detail. The same goes for the tracks, which are visually bland – although they at least look futuristic.

At the same time, you could argue it looks stylish today. After all, an increasing number of modern games are employing deliberately limited graphical art styles. 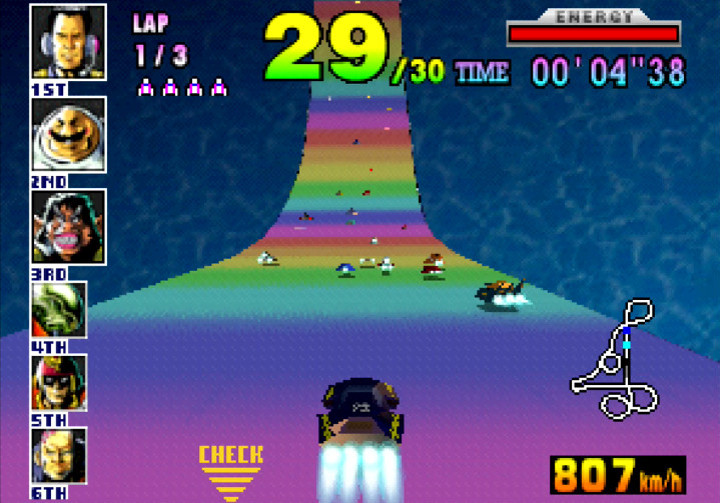 More importantly, F-Zero X’s visuals don’t negatively impact the gameplay. The draw distance is quite short, but not to the point where it’ll unfairly result in your untimely demise.

The simplicity also ensures it looks clean (enough) on most displays. A CRT TV is the best way to play, especially as you then won’t have to worry about input lag.

As per our usual recommendation, an UltraHDMI N64 is the way to go for LCD and LED TVs. 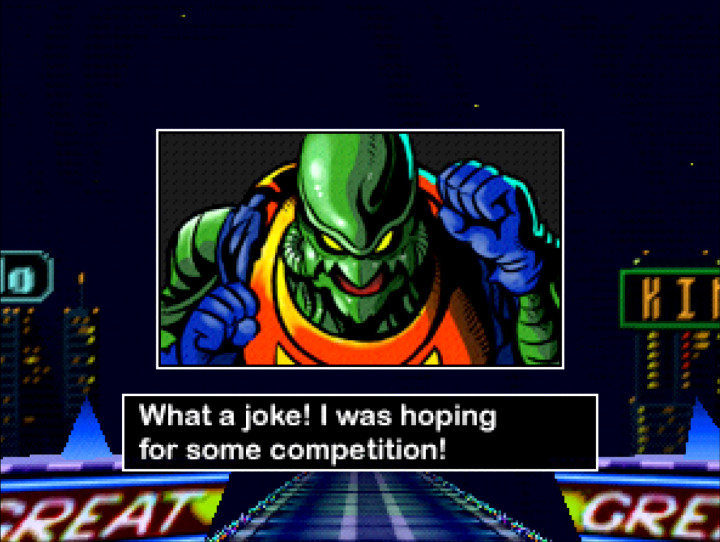 The menus and HUD elements have an old-school comic book aesthetic that really helps to bring F-Zero X’s eccentric cast of characters to life.

Can you name all 30 F-Zero X pilots? Put your knowledge to the test with our quiz.

The rocking heavy metal soundtrack also does a fantastic job of enhancing the game’s attitude and personality even further. 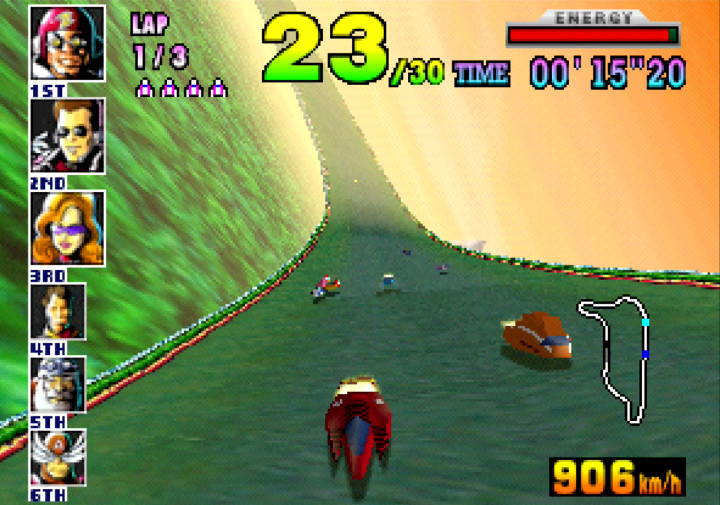 Unsurprisingly, speed is a big deal in F-Zero X.

Courses are littered with boost pads and jumps, enabling you to achieve insane speeds. It’s an utterly thrilling spectacle. 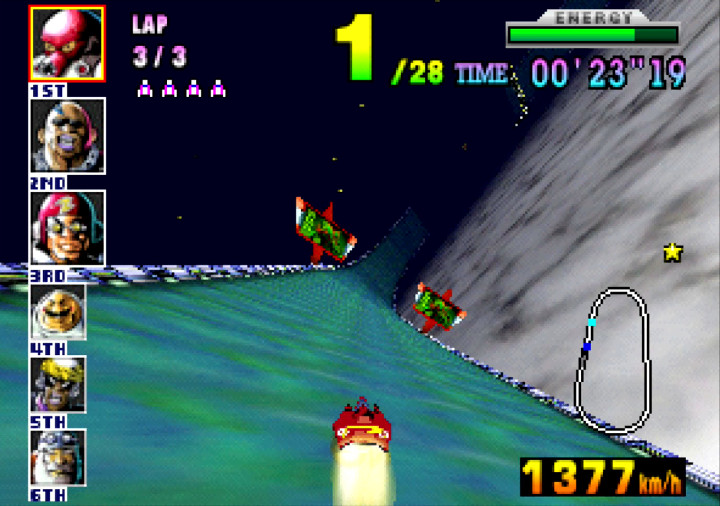 After the first lap of each race, you unlock a boost ability. In exchange for a small amount of energy, you can temporarily go a little faster.

You can regain energy by driving through pit lanes each lap. But crashing into walls or getting barged by other opponents will also deplete your reserves. 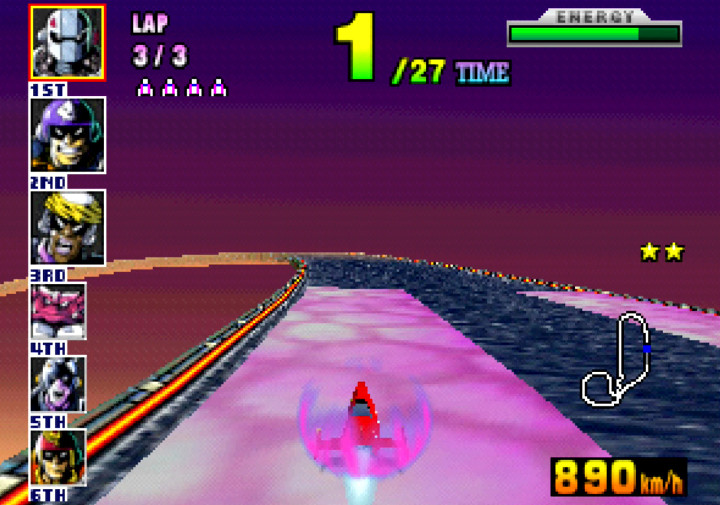 It’s a neat mechanic that introduces a superb risk–reward aspect.

Even when your car is flashing red as a warning, it’s still very tempting to boost just one more time.

And doing so can pay off massively – provided you’re skilled enough.

F-Zero X is accessible enough for a novice to dive into at a lower difficulty. But to conquer the expert and master settings you’ll really need to understand how your vehicle handles. 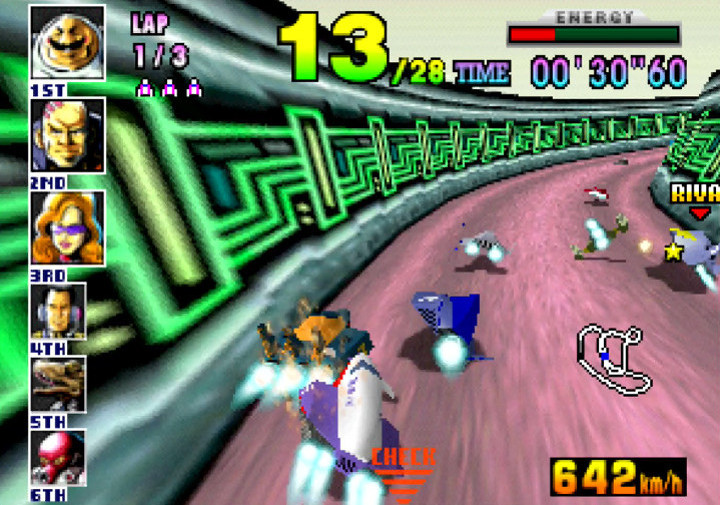 For starters, turning is an art in its own right.

Unlike most other N64 racers, the joystick control is incredibly sensitive. However, it’s this responsiveness that makes F-Zero X’s demanding and tricky tracks surprisingly manageable at high speed. 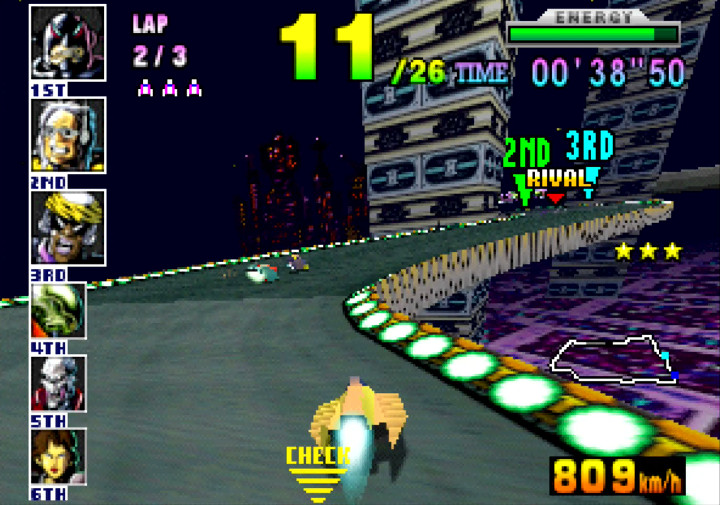 There are plenty of hazards, sharp turns, and narrow or edge-less sections. And all of these can instantly halt your chances of winning.

Thankfully, the game’s gradual difficulty curve means you won’t encounter the worst of these right away. So long as you play the cups in order. 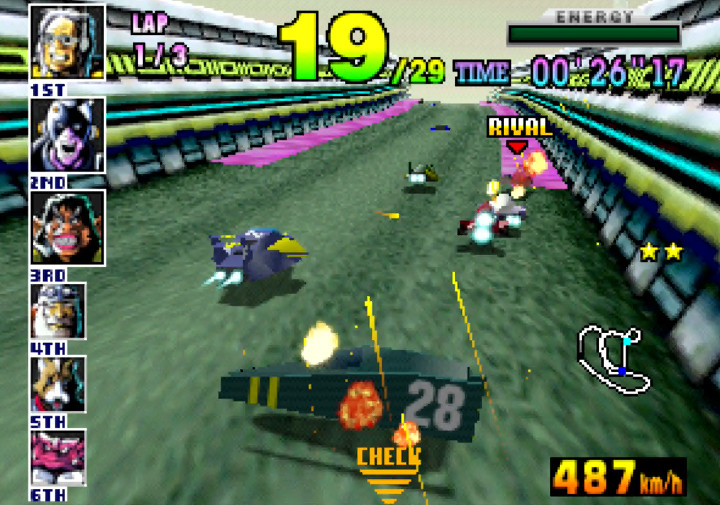 To help you, there are a number of customisation options to get your vehicle exactly how you want it.

Despite there being 30 playable hover cars, they all feel unique. Each F-Zero machine sports a bespoke design, and has its own stats and weight. 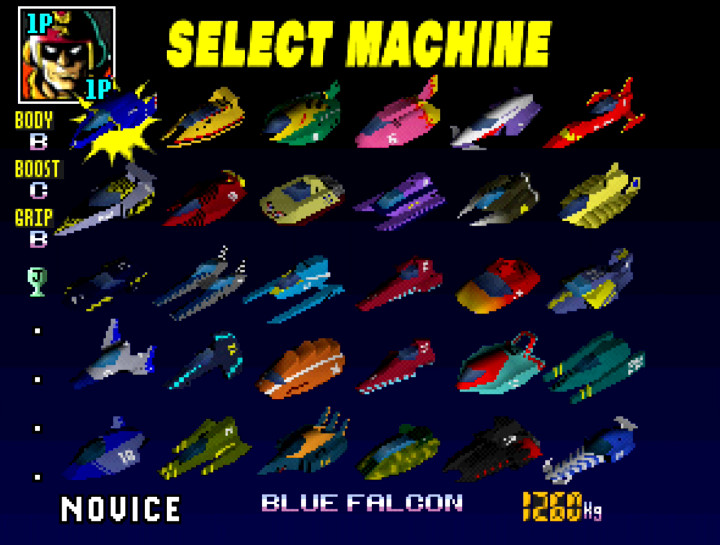 For example, a heavier machine will typically be sturdier and have a good top speed. But at the same time, it’ll also be slower to turn and have worst grip (an odd term for a hover car, we know).

You can further tweak your machine by choosing to enhance its acceleration or max speed (or just opt for balance if you really want). You change this before each track, and with good reason. 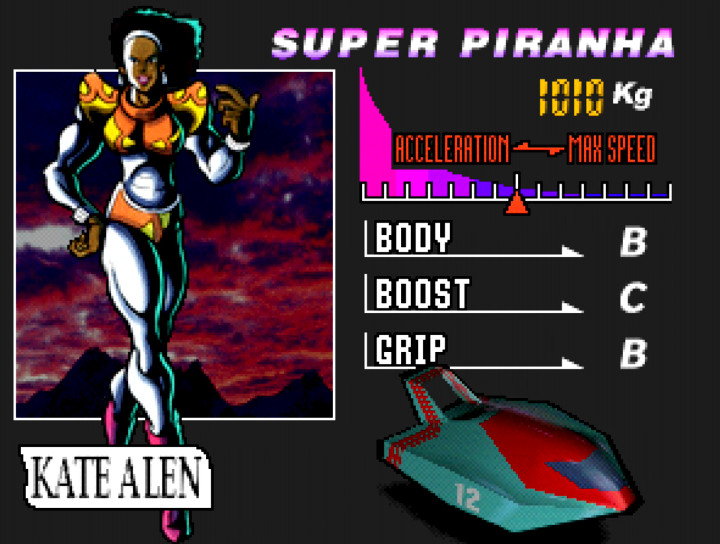 For example, say you’re not good at tracks with tricky corners or sudden hazards. By picking a tougher machine and focusing on acceleration, you won’t lose as much time and energy if you hit a wall.

F-Zero X’s customisation options are far from advanced. But they do allow you to really tweak things to suit your play style.

F-Zero X’s intense focus on winning at all costs gives it a real brutal edge.

It’s not so much about going for gold, but rather making sure your opponents can’t.

You can focus purely on racing, but that alone may not be enough once you reach the game’s higher difficulties. 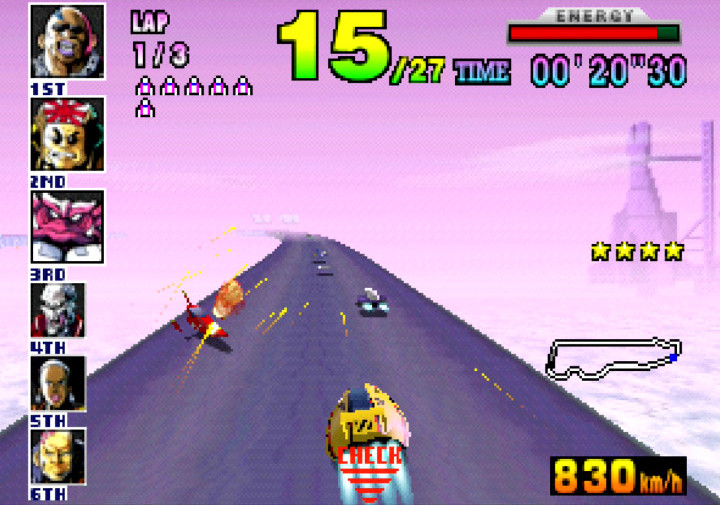 As you play through a cup, the game will point out your nearest leaderboard rival during each race.

Wipe them out and they won’t score any points for that race. It’s far too tempting an opportunity to pass up. 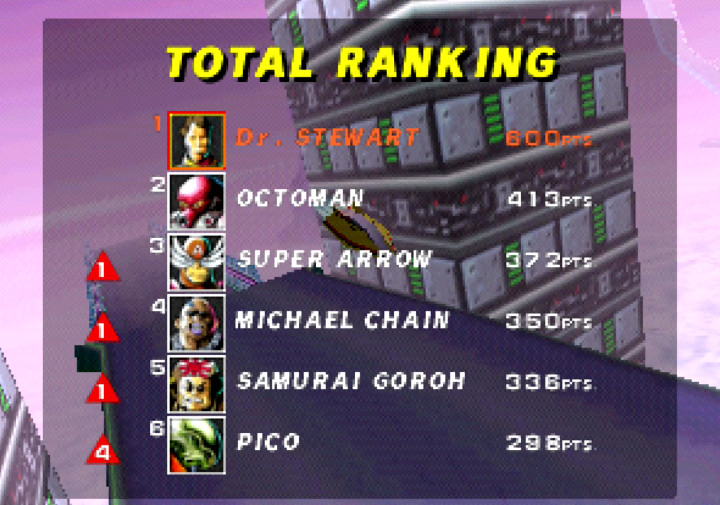 This is one of the best things about F-Zero X. It’s not just about racing – it’s also a cold, calculating game of manipulating the scoreboard whatever way you can.

The game gives you two offensive options. You can shunt sideways into opponents, smashing them against walls or sending them off into the abyss below. 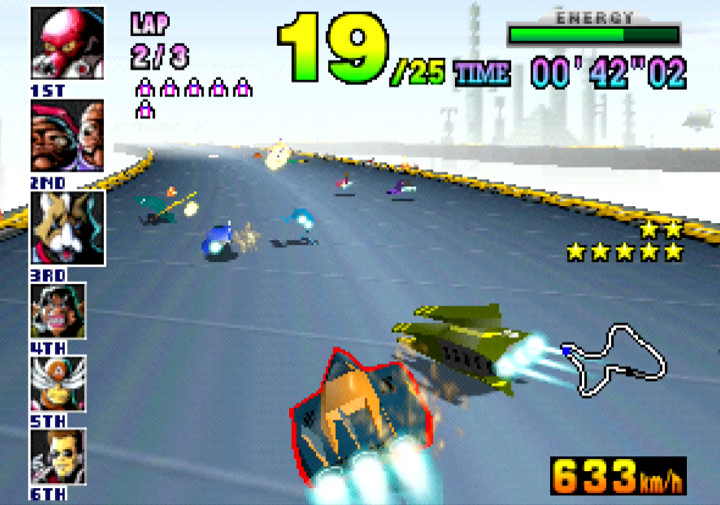 Alternatively, there’s the spin attack – a great way to throw yourself into a group of racers and cause absolute carnage.

The way in which you can instantly end an opponent’s prospects of winning is immensely satisfying. It’s not graphic or bloody, but it feels surprisingly violent.

The power of X

The game generates these courses on the fly, meaning there are an infinite number of possibilities. 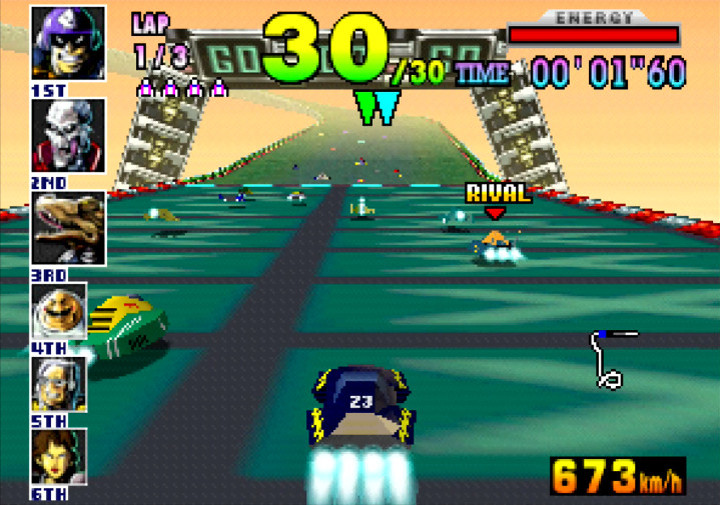 It all sounds too good to be true – and to some extent it is.

While it works as described, X Cup’s tracks rarely prove as entertaining as those in the core line-up. They’re often quite basic and lacking in terms of features. 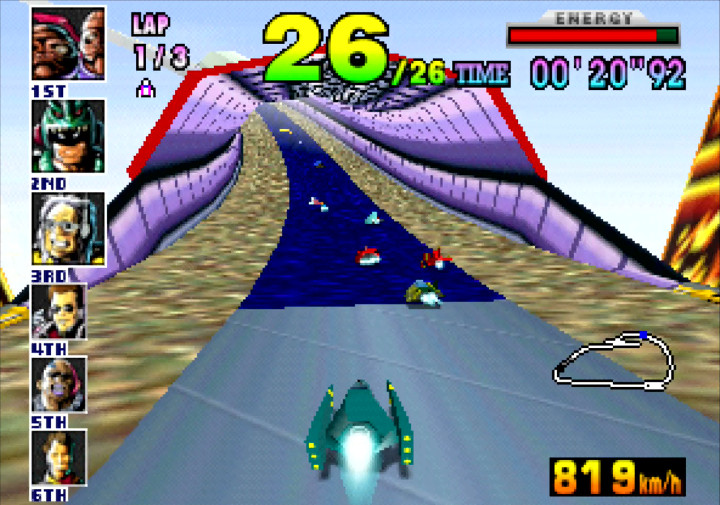 However, you do sometimes get a track with an absurd design, resulting in hilarious calamities.

For example, it’s possible to get a half-pipe track with a 90-degree turn. The best thing is that not even the CPU can handle something like this, meaning you’ll see 20 cars all fly off the track at the same point. 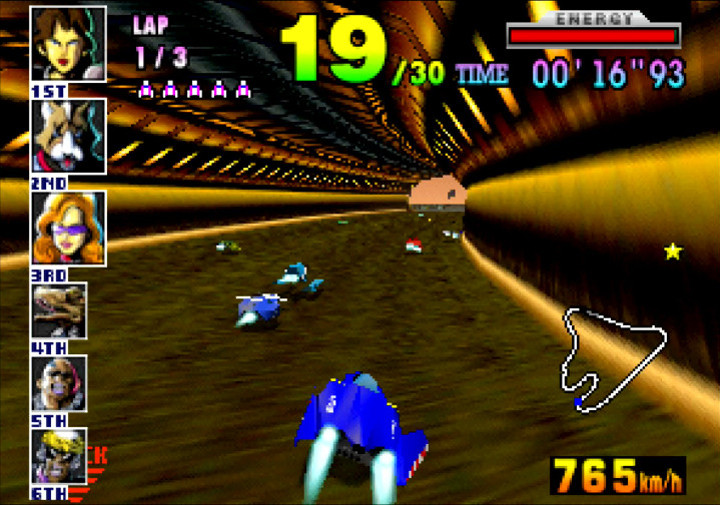 It’s a fun extra that was no doubt inspired by the grander F-Zero X Expansion Kit (which released exclusively in Japan for the 64DD).

That said, it’s really too limited to be anything more than an occasional side mode. 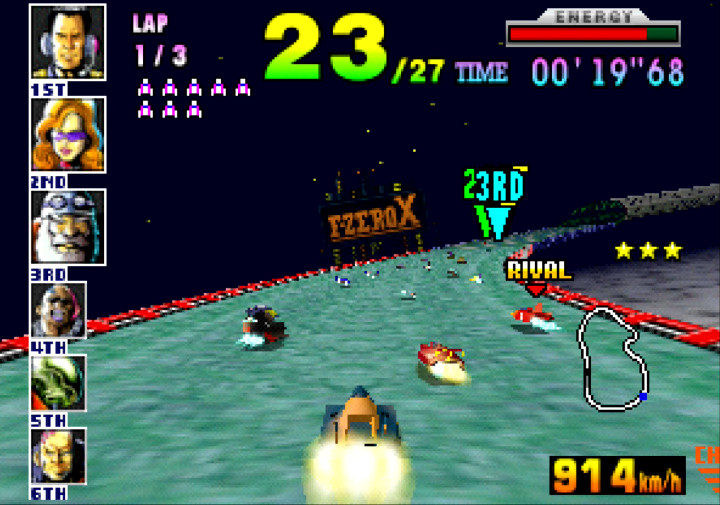 Up to four players can race against one another across all 24 tracks and X Cup.

Even with this number of players, the game still maintains its impressive 60-frame-per-second frame rate. 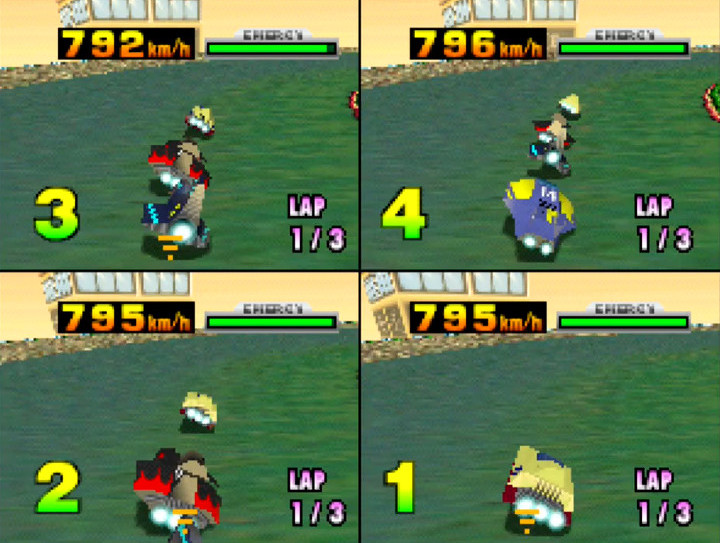 The visuals don’t suffer either, although you could argue that they couldn’t get any more basic. 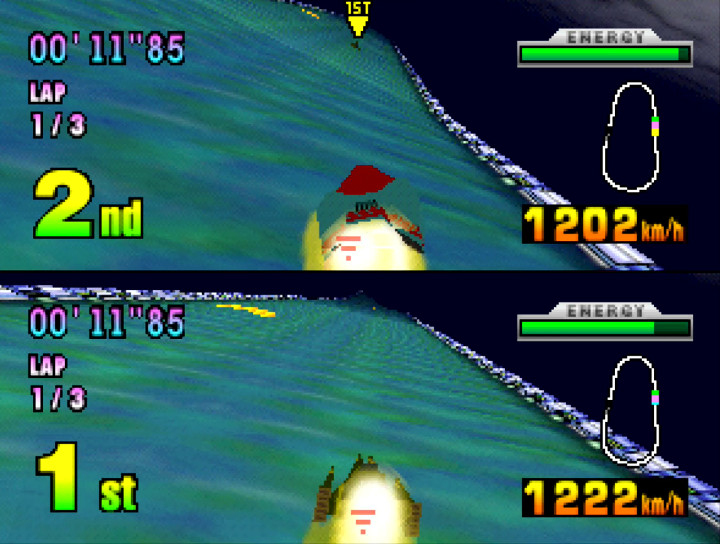 If you crash out before the end of a three- or four-player race, a slot-machine mini-game will pop up on your part of the screen.

Line up three symbols in a row, and you’ll deplete one or more of the remaining racers’ energy.

It’s a great way to give one last “screw you” from the grave, while potentially changing the race’s outcome. 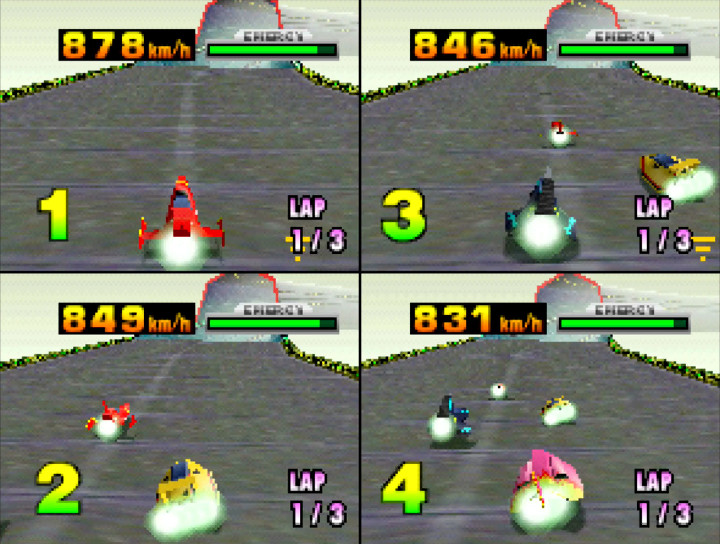 F-Zero X blew gamers away with its insanely fast gameplay in 1998. And it’s still just as thrilling over 20 years later.

The controls are precise and buttery smooth. It runs at a consistent 60 frames per second – even in multiplayer. And it’s a surprisingly deep experience.

Sure, the visuals are very simple. But then time hasn’t been kind to most games from the same era.

And at least F-Zero X has the benefit of being considerably more playable than virtually every other N64 game. 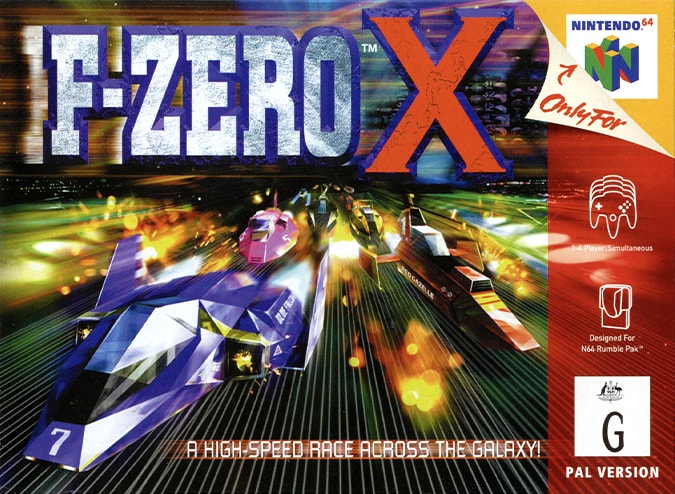