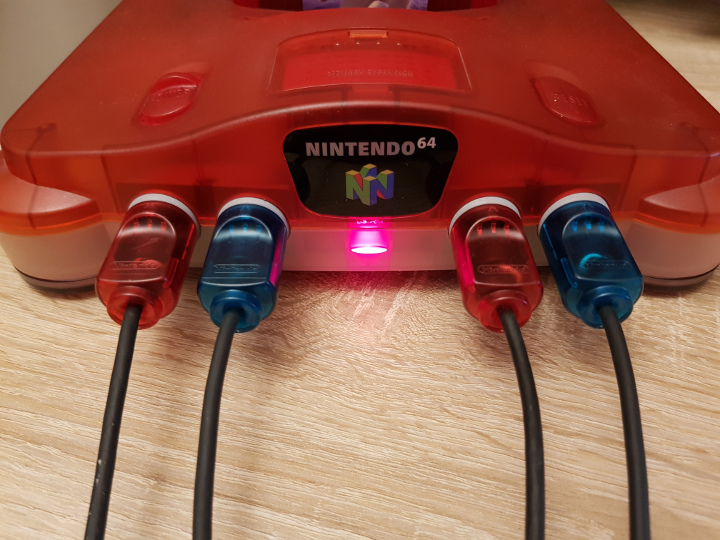 Modern games may no longer support local multiplayer, but that doesn’t mean you can’t go back to your N64! Find a game for you and your mates with our list of the best N64 multiplayer games to play today.

We’ve chosen 25 games that we think are still fun and relatively playable compared to modern games. 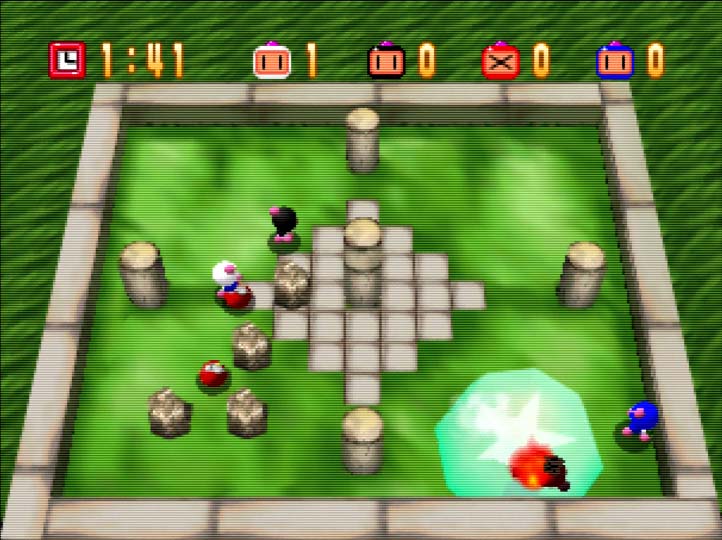 The move to 3D proved divisive with fans at the time, but Bomberman 64 at least does something different. Being able to move around in full 3D means you need to use different tactics in this game.

For example, you can pump up bombs to increase their explosive range without needing a power-up. Or you can stun other players by throwing bombs at them – a great way to annoy your friends!

Bomberman 64 also features a team mode in which you can team up against the AI. 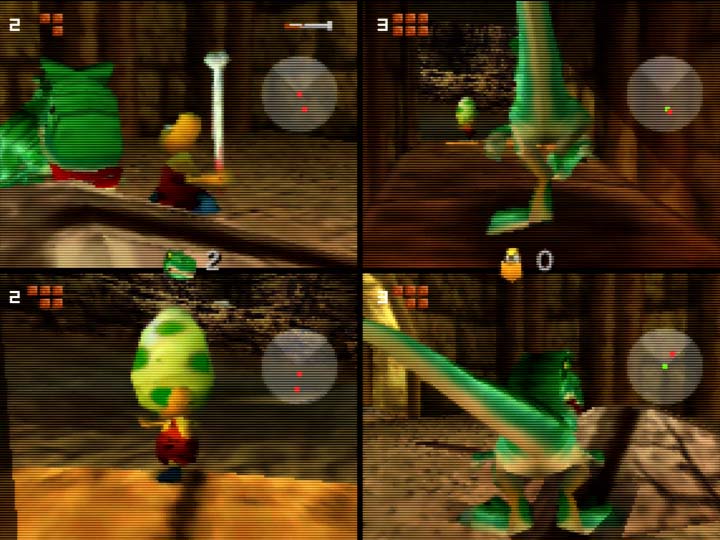 Conker’s Bad Fur Day has a variety of game modes, some of which are really inventive. For example, you can compete in a heist or do battle against the dinosaurs as prehistoric cavemen.

It would be much higher up in our best N64 multiplayer games list, but the frame rate lets it down. It suffers a lot of slowdown with four players, making it difficult to play. 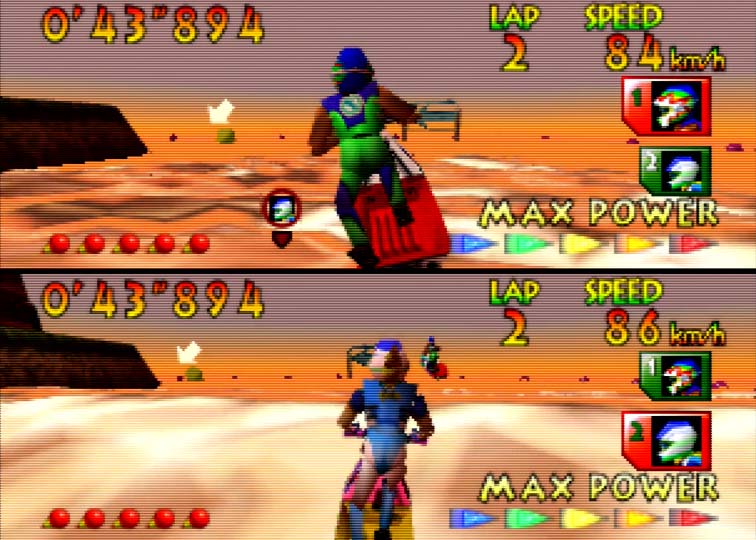 Wave Race 64 is a technical masterpiece, featuring incredible water physics. Racing a friend is all the more thrilling when you have to contend with the waves too.

We just wish it supported up to four players instead of only two. 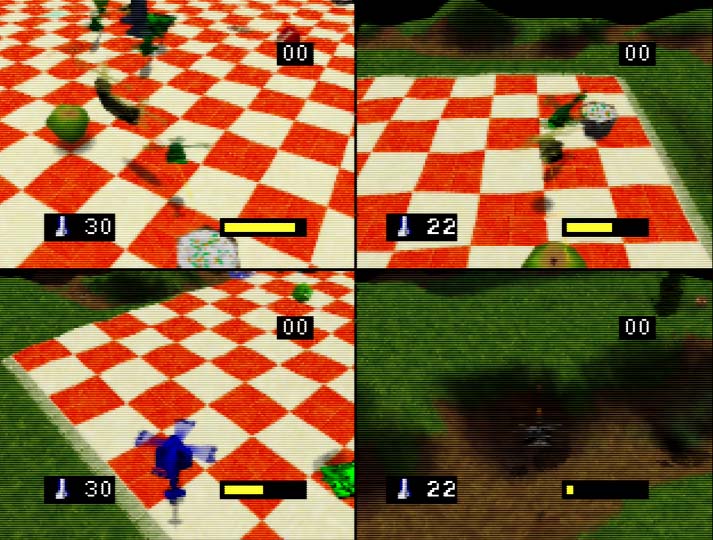 It plays like a straightforward shoot ’em up, but Army Men: Air Combat‘s multiplayer offers a selection of novel modes.

These include competing to kill the most AI bugs or to rescue more scientists than the other players. But don’t worry – you can still blow each other up if you want! 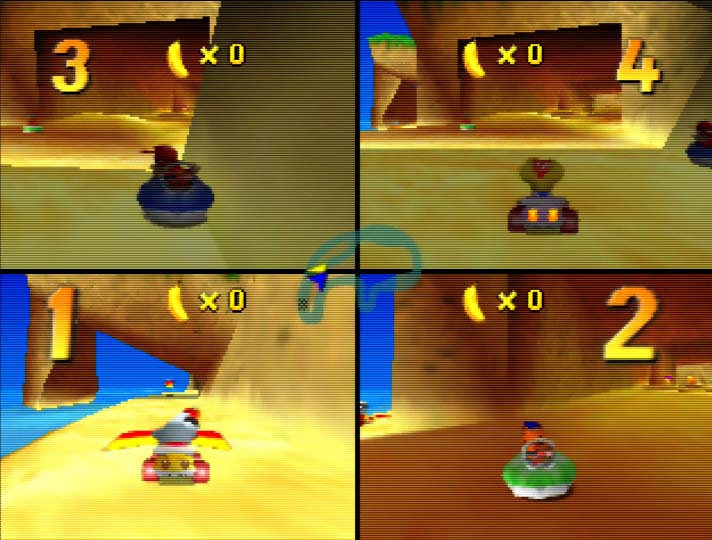 It’s much more fun as a single-player adventure, but Diddy Kong Racing is still entertaining with friends.

The power-ups are a little uninspired, but 20 tracks and three different vehicles more than make up for this. 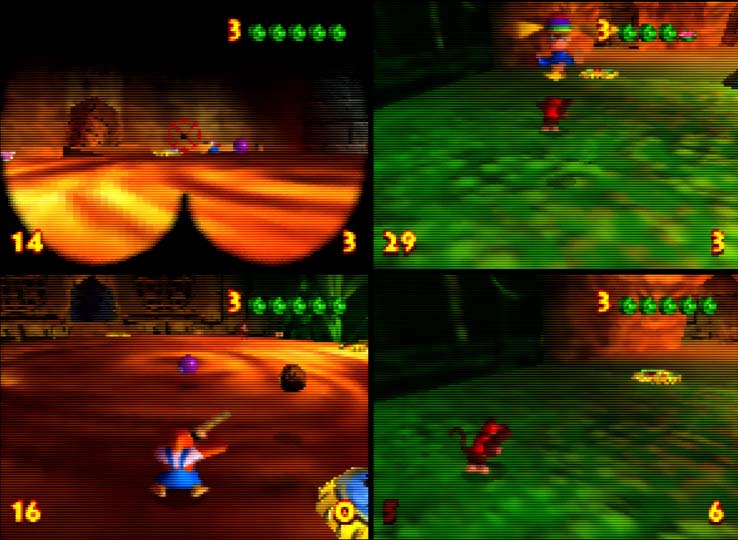 Donkey Kong 64’s multiplayer is an incredibly limited affair, but we can’t stop coming back to it.

The main mode, Monkey Smash, offers a thrilling mix of third-person shooting and melee combat. Having a range of abilities means you can take a number of approaches to playing.

There are only three arenas (and a throwaway secondary mode), but it’s fun to play in short bursts. That said, we wish the frame rate were a little higher. 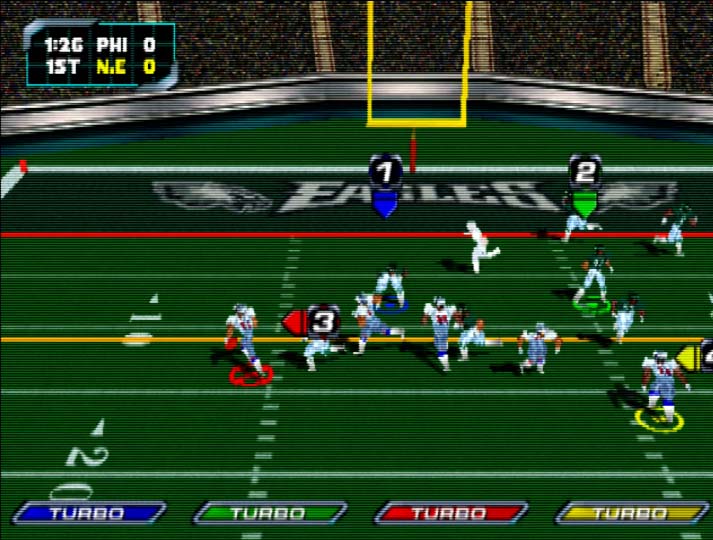 Midway’s NFL Blitz series throws out the American Football rulebook and does its own thing. And it does so for the better.

NFL Blitz 2000 is satisfyingly fast and brutal, and a lot more enjoyable than its now outdated competitors on N64.

For example, you have to travel 30 yards to first down instead of 10, making games a lot quicker.

This version supports up to four players. Two players can also team up against the AI. 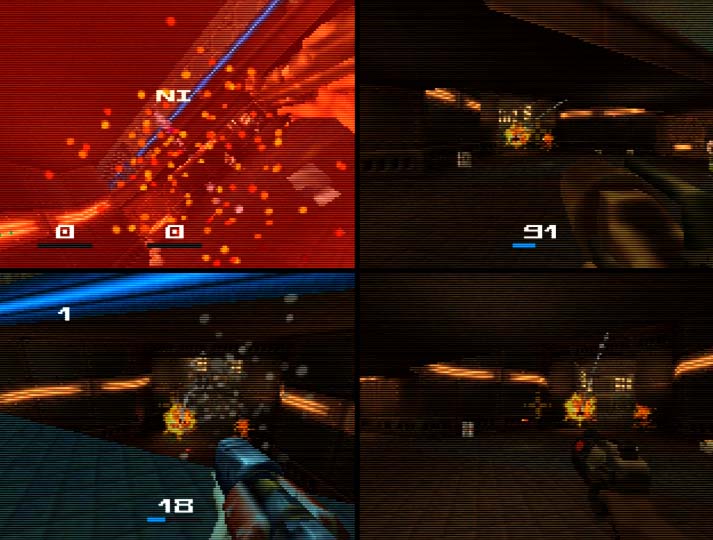 Quake II delivers a frenetic first-person shooter arena experience that performs admirably for the most part.

Unlike most other N64 multiplayer shooters, Quake II is all about map control. Dominate the weapons and you’ll dominate your enemies.

FlagWars (capture the flag) is a real highlight. It’s what you’d expect, but capturing a flag auto-gibs the enemy team – your friends will simply love you for it. 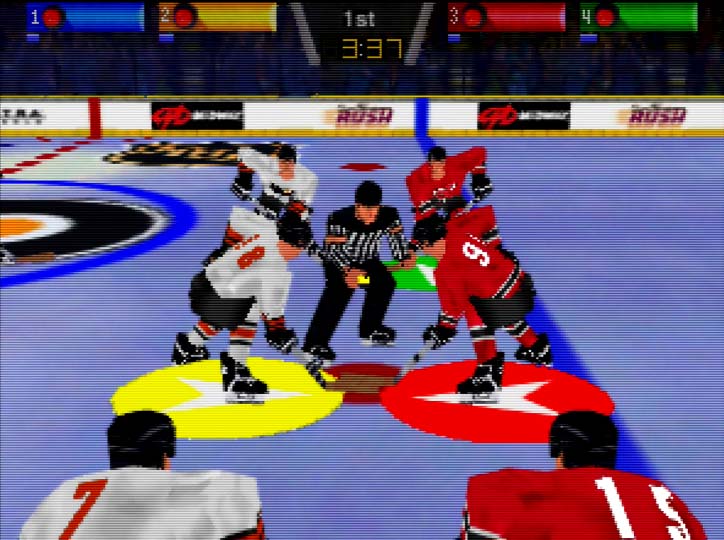 It’s fast, smooth and ever so simple to play. Wayne Gretzky’s 3D Hockey ’98 holds up as a result of its arcade-style gameplay.

We’ve chosen this version over the first entry on N64 because it supports four-player coop against the AI. 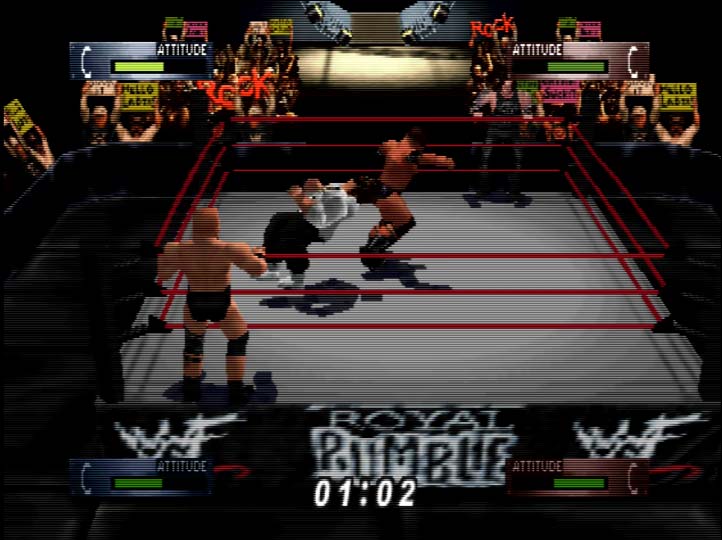 All of the THQ/AKI grapplers are great with three friends. But WWF Wrestlemania 2000 is the one you should play above the rest.

It has a great roster from (the now) WWE’s peak ‘Attitude’ era in the late ’90s along with pay-per-view themed arenas. There’s also a wide range of play options to keep battles varied.

Moreover, it isn’t sluggish in multiplayer – unlike WWF No Mercy. 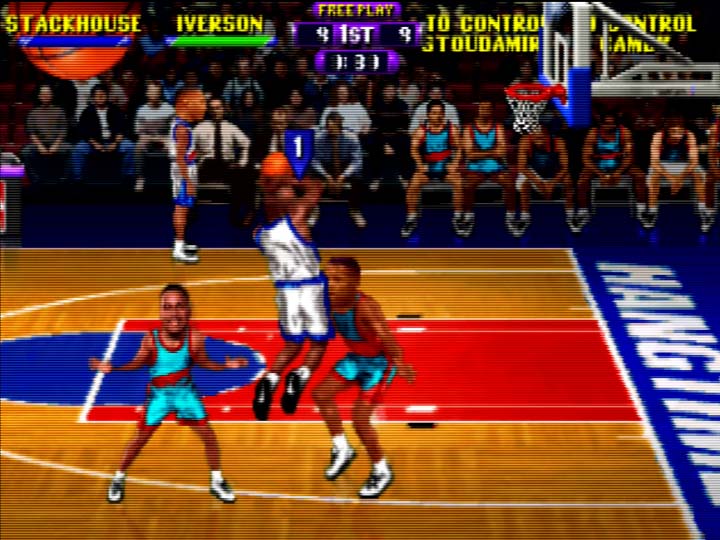 The two-versus-two setup is ideal for four players or two players against the AI. 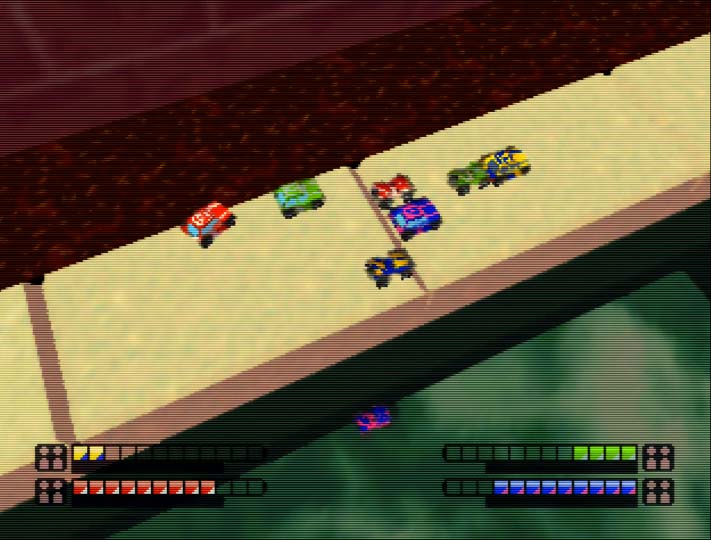 You have to share a controller between two for the eight-player mode, but it works well enough. Throw in some power-ups and it’s an even sillier affair! 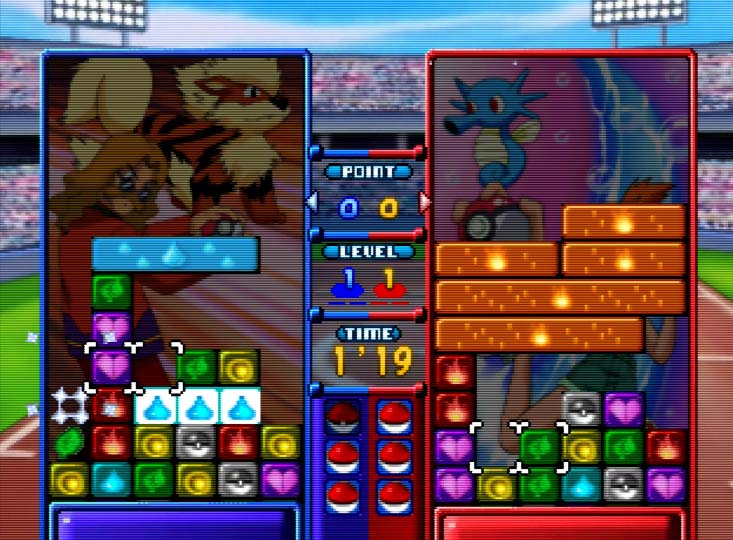 Pokémon Puzzle League is easy to pick up and play, but difficult to put down again!

As with any good battle puzzle game, Pokémon Puzzle League is all about chaining combos. Doing so dumps junk into your opponent’s play area, potentially making it more difficult for them.

It’s bright and colourful, and you don’t need an appreciation or understanding of Pokémon to enjoy it.

We know what you’re thinking. In fact, you’re probably yelling at us through the screen right now.

How is GoldenEye 007 so far down our best N64 multiplayer games list?

While we do love it to bits, the simple truth is that Perfect Dark does it so much better.

In GoldenEye 007, you’re limited to a smaller selection of stages. The frame rate is a right bottleneck. And you can’t assign some settings on an individual basis. For example, all players must either use normal or inverted look controls in a game.

These issues aside, GoldenEye 007 still proves fun if you take the time to get used to its outdated aspects.

There are multiple deathmatch options and great weapon selections, including automatics, power weapons and remote mines.

If this sounds too extravagant then you and your mates can just slap each other about in the Facility loos. 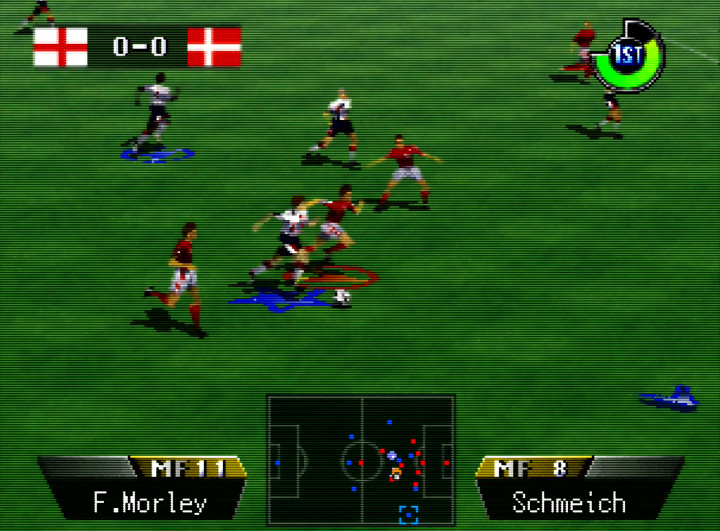 International Superstar Soccer 64 holds up so well today due to its arcade-style gameplay.

It supports up to four players, and you can even all team up against the AI.

The open play and penalty kick modes are great for quickly diving into a game. However, you and up to three friends can also play cooperatively through the international and world league modes. 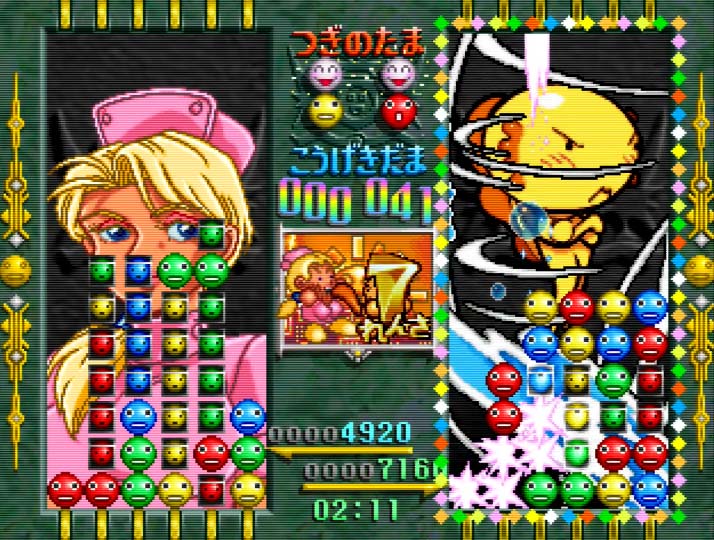 This battle puzzle game is similar to Puyo Puyo, but much more intense and very fast.

Coloured balls with faces fall from the top of the screen. Match three or more to clear them.

As with similar games, the goal is to create multiple stacks of balls and clear them in a single move. This chains combos, which results in filling your opponent’s scren with harder-to-clear sealed balls.

It’s a constant to and fro until one player is simply overwhelmed. It’s quick, exciting and features beautiful 2D animations – a rarity on N64. 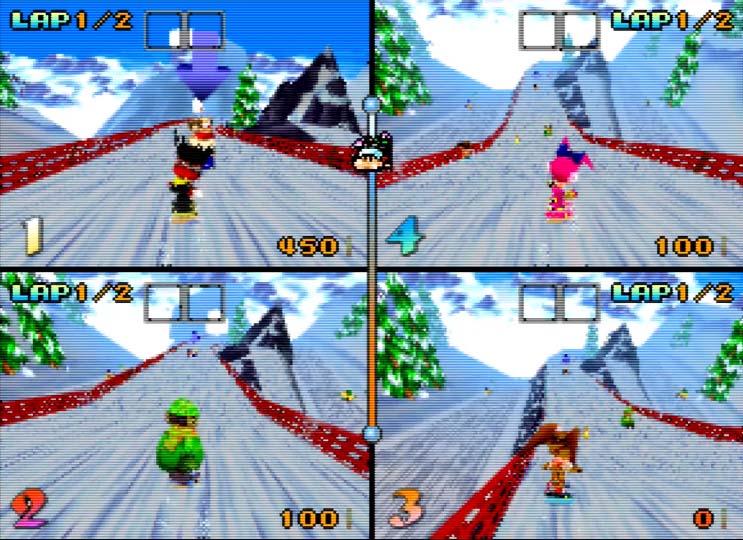 Snowboard Kids was overshadowed by Mario Kart 64 and Diddy Kong Racing – a shame given its a great game. And unlike the other to games, it actually has background music in four player!

The game features a novel dual power-up system: projectiles and items that you don’t need to aim. This setup does a good job of keeping races fairly close and exciting right until the end. 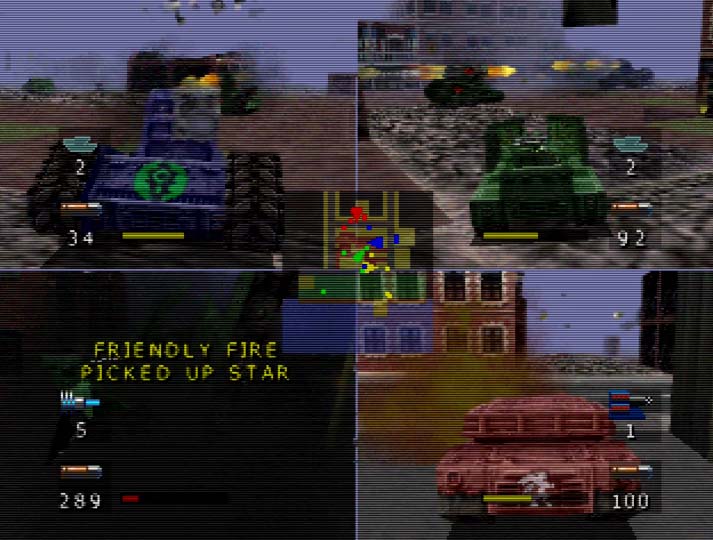 It runs incredibly smoothly given that it features destructible buildings and support for AI players.

The Tank Wars mode is the real draw here. Each player is given a team of AI tanks, resulting in large-scale warfare.

You can also team up with a second player in the game’s campaign mode. 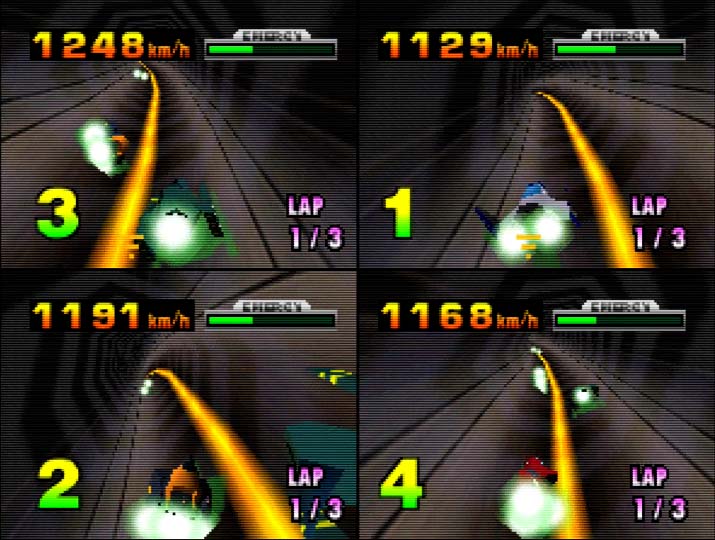 F-Zero X is the ideal choice if you’re looking for a skill-based N64 racing game.

It’s simply astonishing how fast this game feels even today. Vehicles move at a blistering pace, and the game runs at 60 frames per second even with four players.

It’s a challenging game, and the tracks arguably put up more of a challenge than your friends.

If you lose your vehicle before the end of the race you get to play a slot machine mini-game. Get lucky, and you can drain the energy of an opponent’s vehicle. It’s a great way to exact revenge beyond the grave, and keeps everyone on their toes from start to finish. 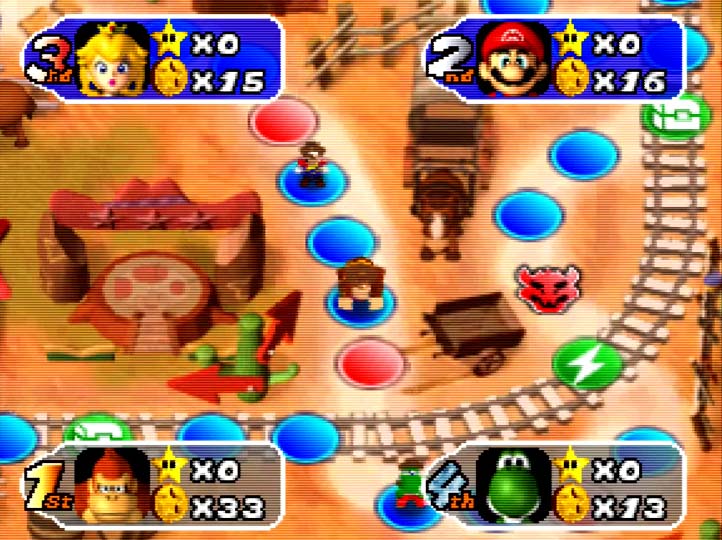 Jokingly referred to as the destroyer of friendships, the Mario Party series is first and foremost a multiplayer affair.

As a virtual board game with mini-games, Mario Party strikes the perfect balance between skill and luck. It also gives you plenty of opportunities to screw over your friends.

There are three Mario Party games on N64. But which one should you play?

While the first game is our personal favourite, it features joystick-spinning mini-games that destroy your controllers and palms.

Nintendo omitted this style of mini-game from the second and third games, so they’re arguably better choices.

Gauntlet Legends features high up in our best N64 multiplayer games list because it’s the king of N64 coop games.

Up to four players can team up to battle the demonic Skorne and his hellish forces.

Gauntlet Legends is a simple hack ‘n’ slash game that originally released in arcades. As a result, it’s easy to pick up and play.

Nevertheless, the choice of four character classes and multiple attack abilities mean there’s more depth than you might think. 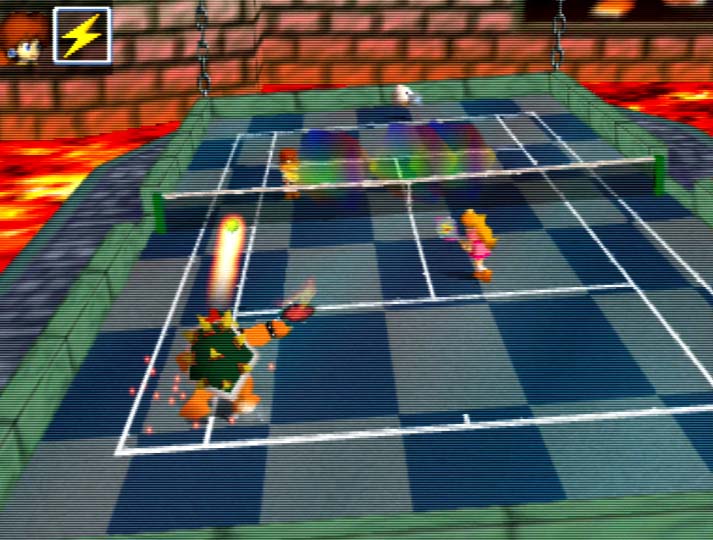 Don’t let the cute and whimsical cast of characters fool you. Mario Tennis is actually a surprisingly down-to-earth and somewhat serious tennis game.

That said, there’s also a special mode with items (like Mario Kart 64) if you’re after a sillier experience.

The control setup primarily uses the A and B buttons, keeping the gameplay nice and simple.

Moreover, it looks lovely and runs so smoothly, allowing for fast and frantic rallies with friends. 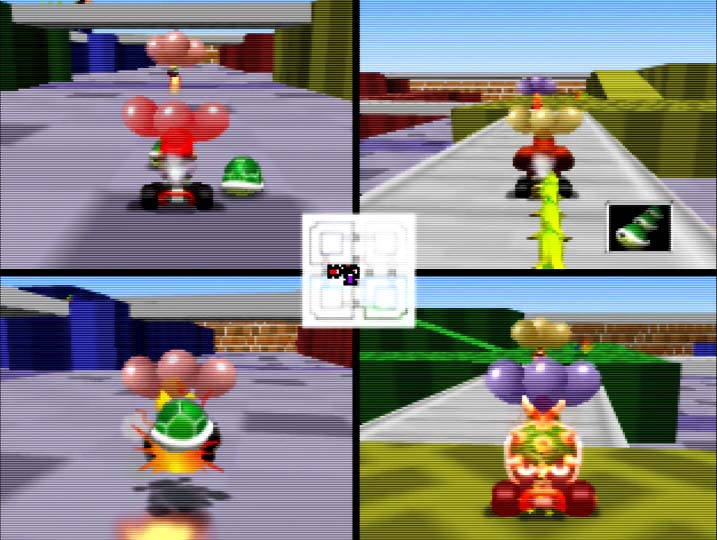 While Mario Kart 64‘s single-player mode is a drag, the multiplayer is both fun and accessible.

The game’s famous item system throws an element of chaos into every race. Even the most skilled racers are rarely safe from the wrath of a blue shell or lightning bolt.

There’s also the Battle Mode, should you want a change from vanilla racing. While there are only four maps, this mode does include Block Fort – the greatest Battle Mode map of all!

Super Smash Bros. has a small selection of characters and stages compared to more recent entries in the series. But that doesn’t matter, because it’s still ridiculously good fun.

It’s the game’s simplicity that helps to make it so enjoyable even today. It’s great with both newcomers and experienced players.

It far from the prettiest N64 game, but this means it’s able to maintain a near-solid frame rate. You only ever see slowdown when there’s a lot happening on screen in four-player battles.

What’s not to like about using Nintendo characters and items to (virtually) beat up your mates? 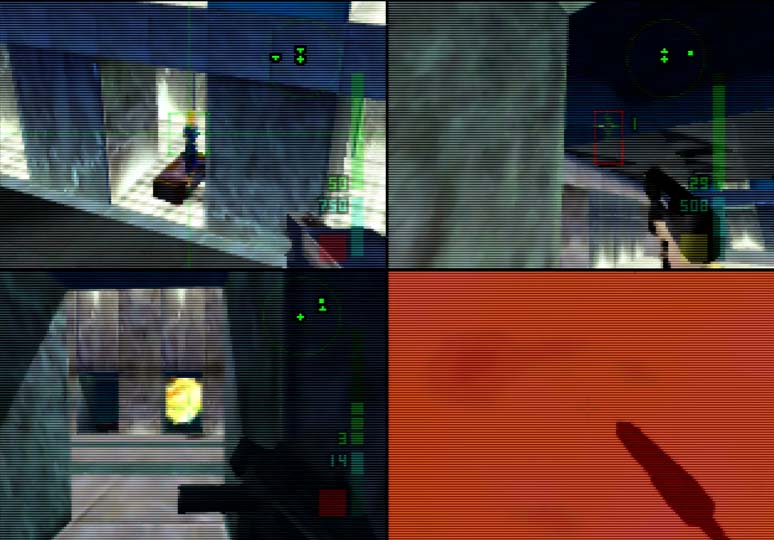 Perfect Dark offers an unrivalled amount of choice when it comes to game modes, maps, weapons and playable characters.

Up to four players can face off, but you can also add up to eight AI bots.

In addition to the standard deathmatch modes, you can play cooperatively through the campaign and “Challenge” scenarios.

And then there’s Counter-operative mode, which is a novel twist on the classic coop formula. In this mode, one player tries to beat campaign missions while the other plays as the enemy guards.

Despite its name, the game isn’t perfect. The frame rate for one really dips, especially when you add AI bots to a splitscreen match. And the outdated controls take some getting used to.

But it’s worth doing because Perfect Dark offers so much more than every other N64 multiplayer game.

What do you think are the best N64 multiplayer games?