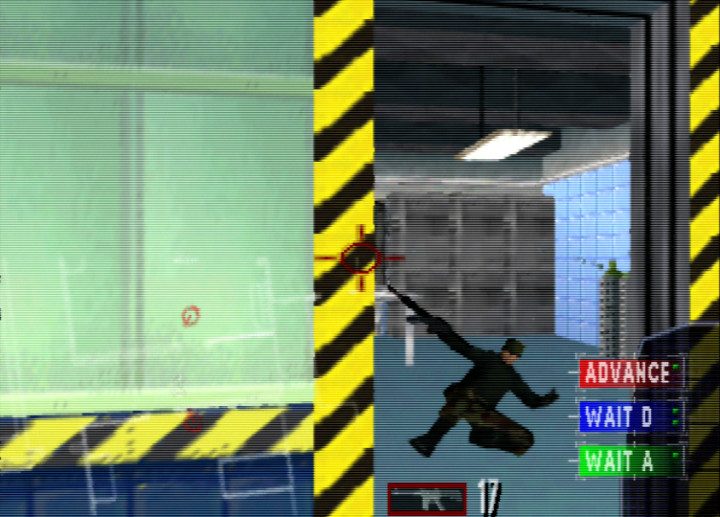 Rainbow Six may not be as fondly remembered as GoldenEye 007. But it does have the honour of being the N64’s only tactical first-person shooter.

And it’s one of the few N64 games in this genre that still holds up incredibly well today.

Rainbow Six puts you in charge of an elite counter-terrorism force.

Across 12 missions, you must rescue hostages, defuse bombs and hack computer systems – all while battling the terrorist threat.

You must both plan and play out each mission, making Rainbow Six very different from other N64 first-person shooters. 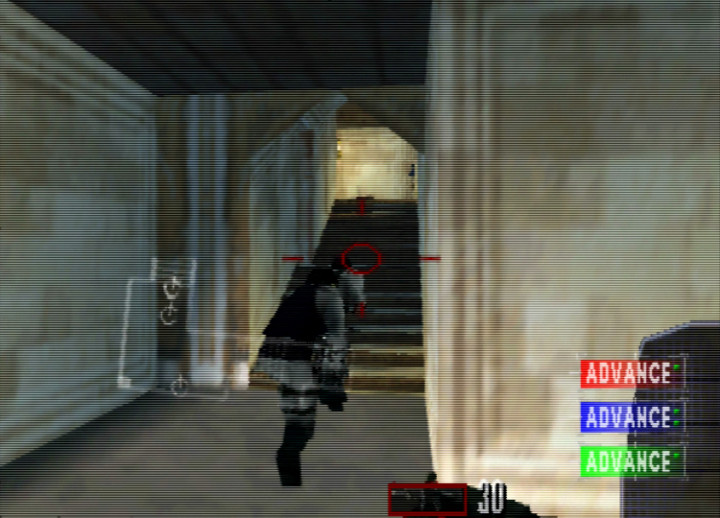 Comprising only the world’s most elite operatives, Rainbow must respond to numerous attacks by a radical eco-terrorist organisation.

You follow the game’s story through mission briefing and background information documents. This approach feels authentic and surprisingly engaging, and arguably does a better job than in-game cutscenes would.

What’s more, it’s entirely optional, meaning you can get straight into the action should you wish. 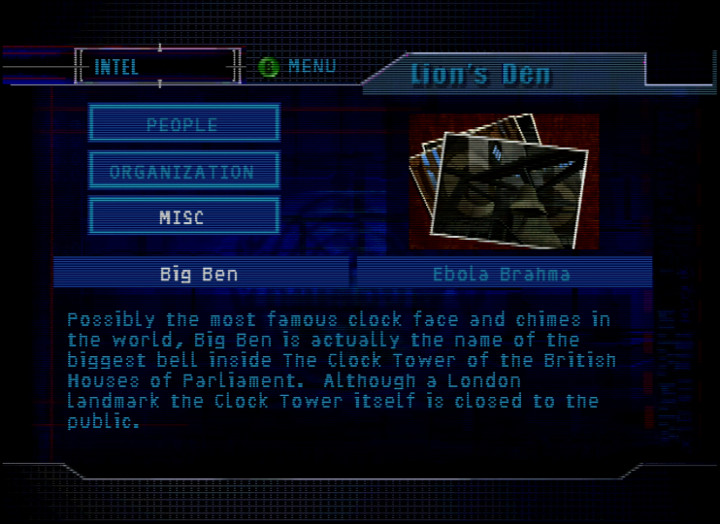 Rainbow Six’s gameplay is more down-to-earth than the likes of GoldenEye 007 or Doom 64.

It’s slower paced, and it usually only takes a single bullet to kill you (even on the easiest difficulty setting). 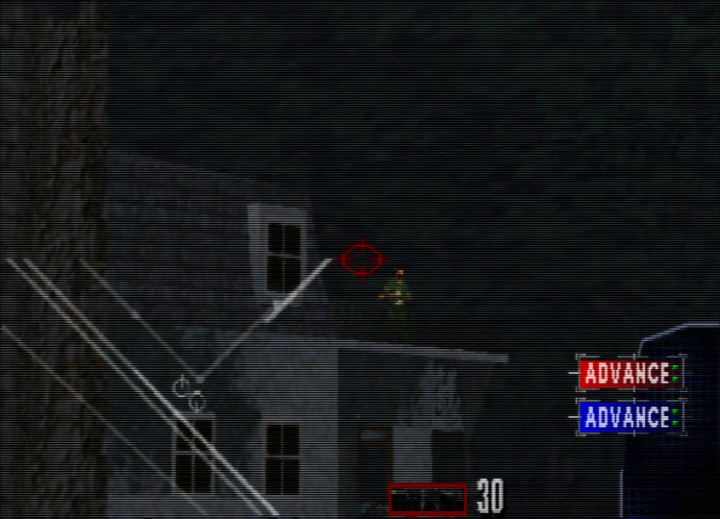 This results in a tense and thrilling experience at times, especially as the game features permadeath. If an operative die, they’re gone for good (but you do have an endless supply of average-skilled reserves).

On the higher difficulty settings, Rainbow Six is a brutally tough challenge. It takes exceptional planning and skill to beat it.

Thankfully, there’s a generous auto-aim system on your side. And because the gameplay is slower and requires a more considered approach, the outdated control setup rarely hinders you. 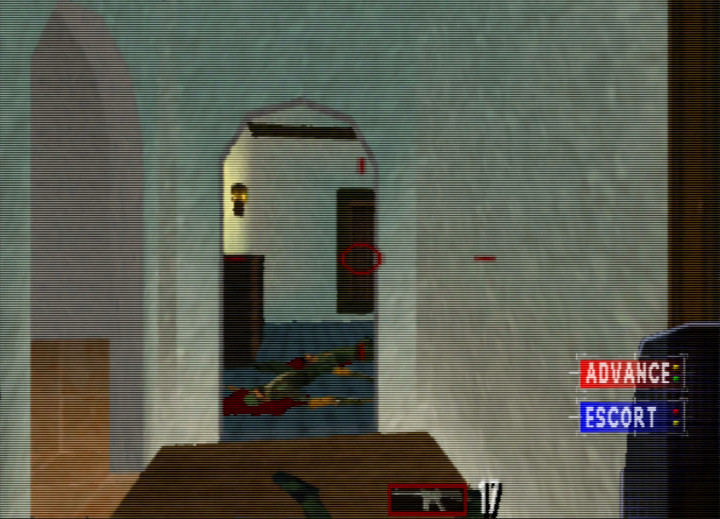 Failing to prepare is preparing to fail

Before each mission, you get to choose your operatives (up to four), equipment and fireteam configuration.

It’s not mandatory, but to not do so would be missing the point.

Properly planning each operation greatly increases your chance of success. Not only that, but seeing your plan play out without a hitch makes Rainbow Six feel incredibly rewarding to play. 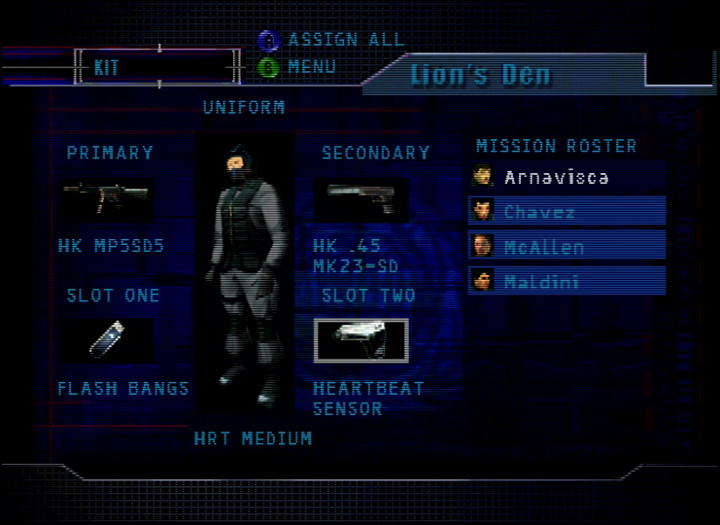 Each operator has different strengths and weaknesses, and so picking the right one for the job is ideal.

Will you be engaging the enemy at long range? Ensure there’s a firearms expert in your team, and give them a rifle. Want to hack a security system quickly? Choose an electronics specialist and equip them with an electronics kit.

Make the wrong choices, and you could find your roster lacking in specialists later in the game thanks to permadeath.

One of Rainbow Six’s coolest features is its mission-planning tool.

This screen enables you to tell your operatives where to go and what to do in a mission. You do this by marking waypoints on a wireframe map of the mission environment.

It’s worth noting that it isn’t a flawless system. 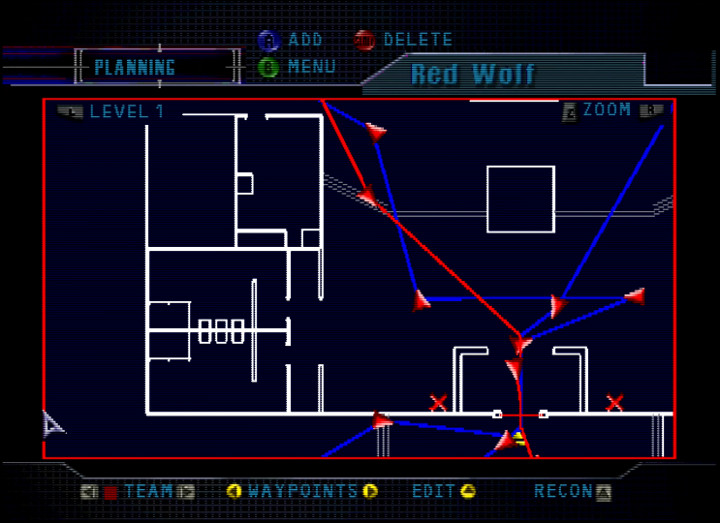 The wireframes are 2D, meaning they don’t portray certain elements (such as cover) very well. Moreover, some of the environments are indecipherable at first glance.

Sometimes you just have to recon the mission first, which defeats the purpose of planning it in the first place.

These few instances aside, it’s generally a very useful tool.

You can tell your AI team mates to tackle objectives, such as escorting hostages to safety. 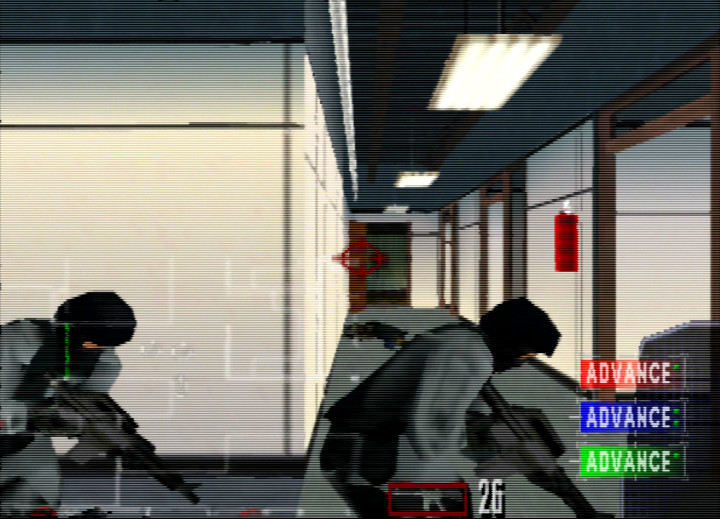 Better yet, you can use go-codes to coordinate the action.

In Rainbow Six’s fourth mission, for example, the hostages are being held in a well-defended room.

By setting waypoints, you can tell your squad mates to each approach a different door and wait for a go-code.

Upon activating the go-code, they’ll all storm in simultaneously and surprise the enemy. 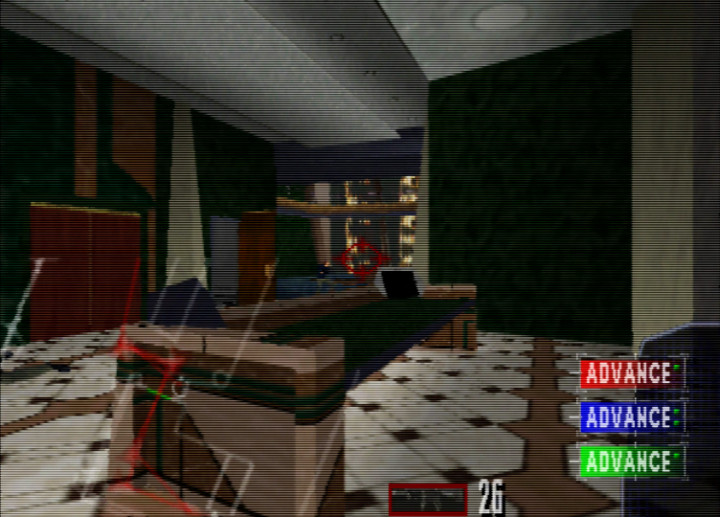 It’s moments like these that really set Rainbow Six apart from every other N64 shooter. And the fact that you can plan in intricate detail means you can try multiple approaches per mission.

The scripting generally works very well, although the AI can get stuck on objects if you’re not careful with waypoints.

It’s just a shame that AI team mates can’t use frag grenades or flashbangs. You can take control of AI operators as you play, but this breaks the scripting. 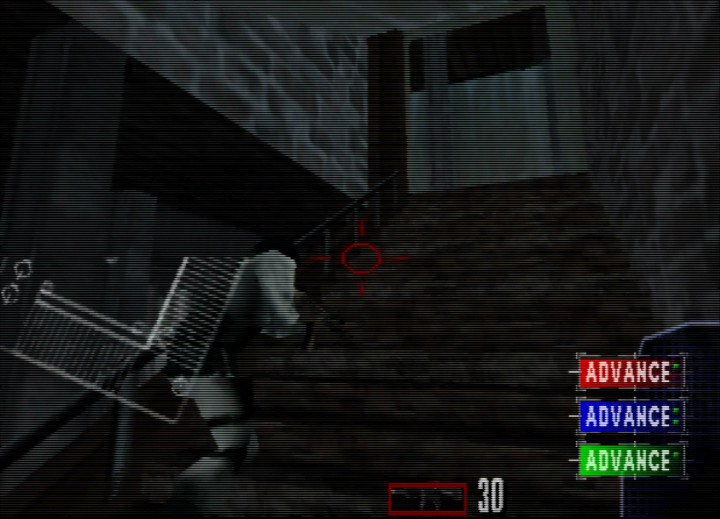 You don’t have to rely on the AI if you don’t want to. That’s because two people can play through Rainbow Six’s campaign cooperatively.

It’s easier to coordinate actions, as both players can use flashbangs and grenades.

Furthermore, you can go off script, unlike the AI, which is ideal if your initial plan doesn’t work out. 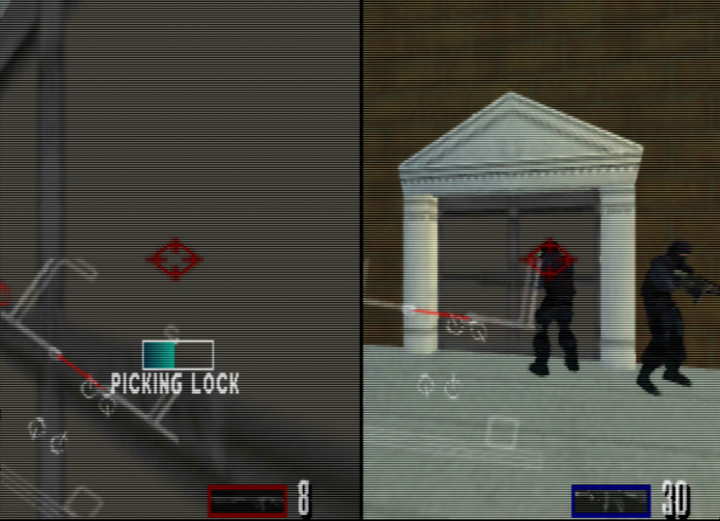 You still have access to the same mission-planning options, and can use AI operators too.

The fact that coop offers the same full experience (and more) makes Rainbow Six one of the best N64 coop games. 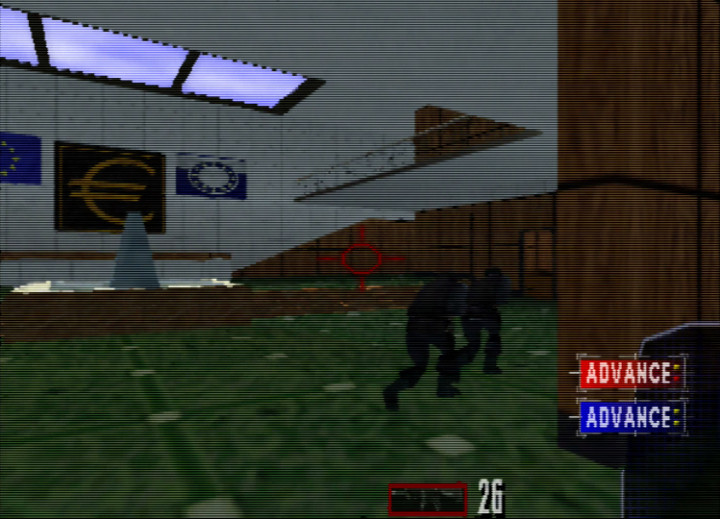 Even by the N64’s outdated standards, Rainbow Six’s visuals are simple. Nevertheless, they’re clean and clear for the most part.

Some of the darker environments don’t fare particularly well, but you and your team have night-vision goggles for these moments. 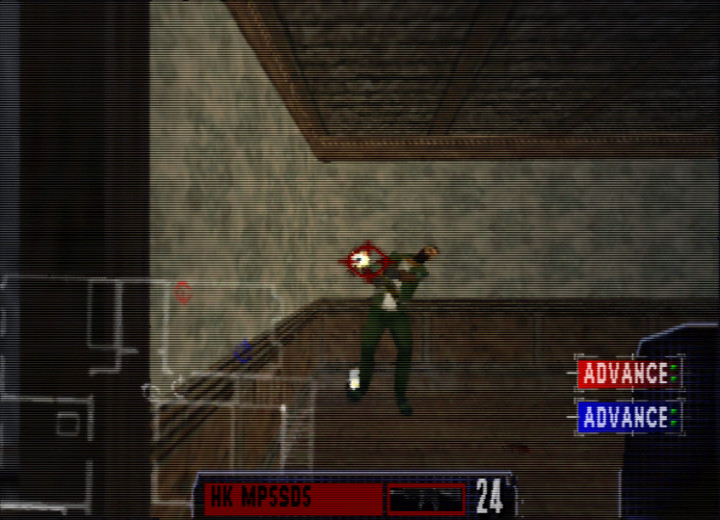 A CRT TV still offers the best experience, especially when using the N64 Expansion Pak to boost the resolution.

Overall, the graphics do a serviceable job, and thankfully don’t come at the cost of performance. The frame rate remains consistent from start to finish, even in coop, enhancing Rainbow Six’s playability today. 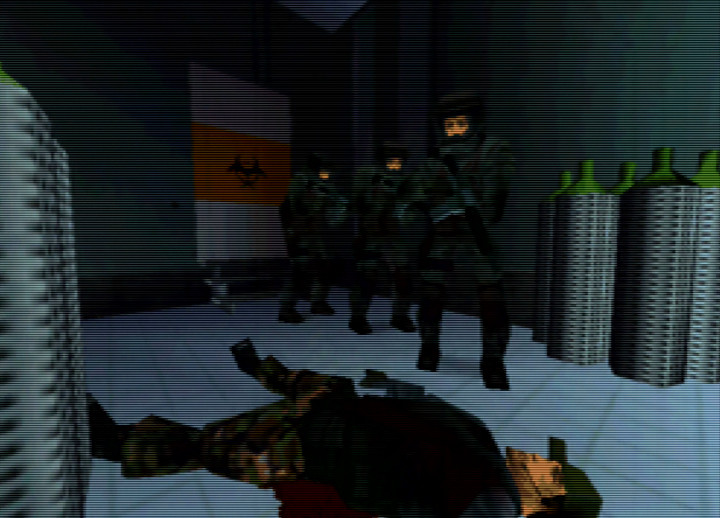 The comprehensive mission-planning options and clever AI scripting add considerable depth, and work without issue for the most part. Using these tools to successfully pull off a mission is incredibly rewarding too.

Being able to play the game fully in coop is a nice bonus. Adding a second player offers more tactical options, resulting in a deeper experience.

It runs very smoothly in both the single- and multiplayer modes, although the graphics are a bit simplistic.

In short, Rainbow Six is a game every modern-day N64 fan should play. 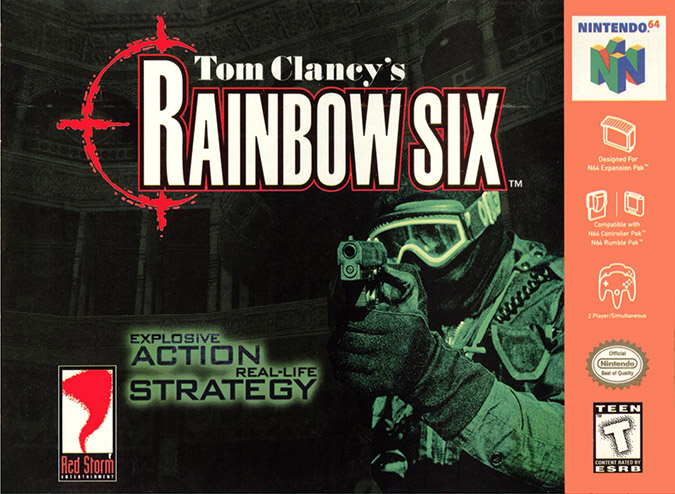