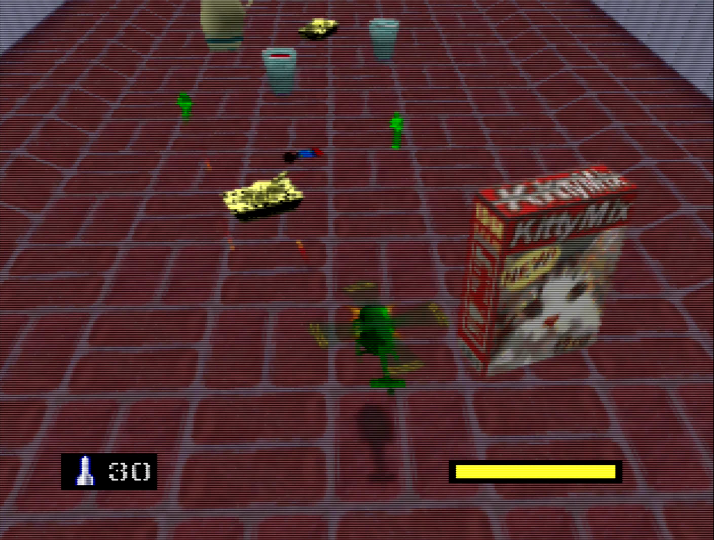 It’s one of three Army Men games on the N64. However this entry differs greatly from the other two in terms of gameplay.

The game takes place in two dimensions – the world of the Army Men and the real-world. You play as a helicopter pilot in the Green Army’s never-ending war against the evil Tan Army.

This combination of make-believe and reality allows for some really clever gameplay ideas in both the campaign and multiplayer mode.

Naturally, you do all this while blowing up plenty of Tan units along the way. 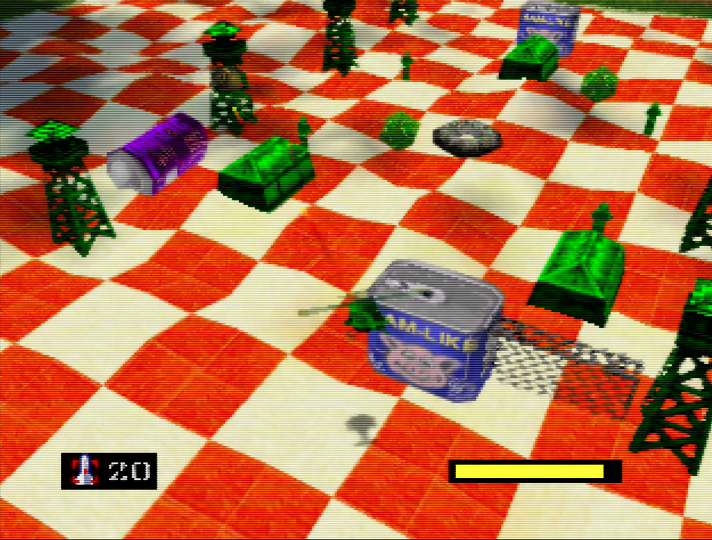 Despite being a mere child’s plaything, your helicopter has many abilities and packs a real punch in terms of firepower.

In addition to your standard machine gun, there are a number of special weapons you can collect.

These include homing missiles, napalm bombs and – somewhat worryingly – paratroopers with dynamite attached to them. 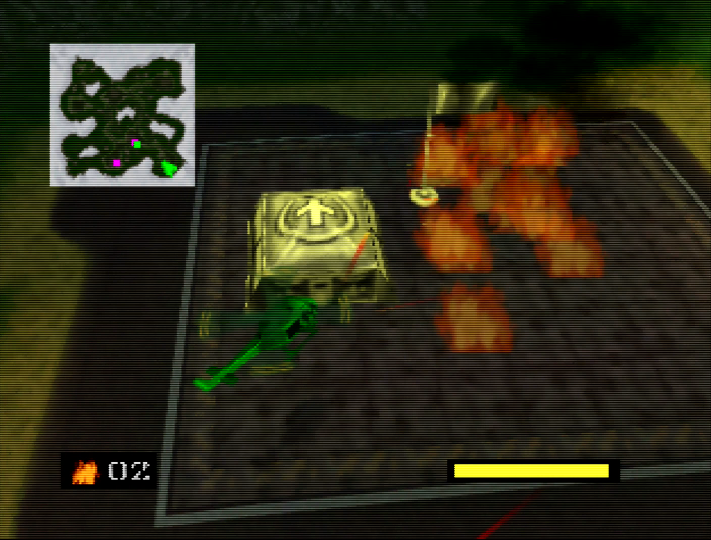 You come up against a wide range of enemy land, air and naval units throughout the game. So it’s important to use the most effective special weapon against each type.

It not only saves time, but also increases your chances of survival.

Army Men: Air Combat isn’t an especially difficult game. But later missions can definitely catch you out if you play in a mindless or reckless manner.

The world is a playground

Your helicopter is equipped with a winch, which makes for an interesting gameplay mechanic.

Most of the time, you use it to pick up special weapons and health.

However, you also often need it to airlift mission-critical items, such as batteries to power a toy train set or reactivate a radar system. 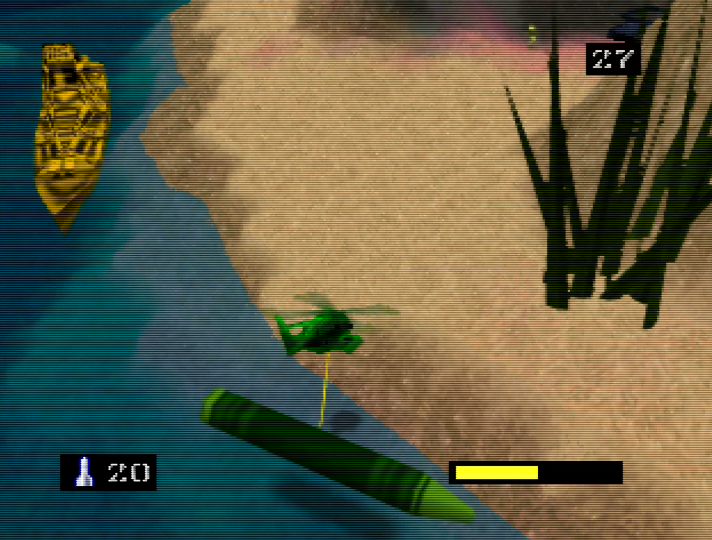 Army Men: Air Combat really does a great job of using its real-world setting to creatively enhance the gameplay.

For example, in one mission you must winch food – which is attracting deadly ants – away from your base. You can then dump it in an enemy base, making it their problem instead. 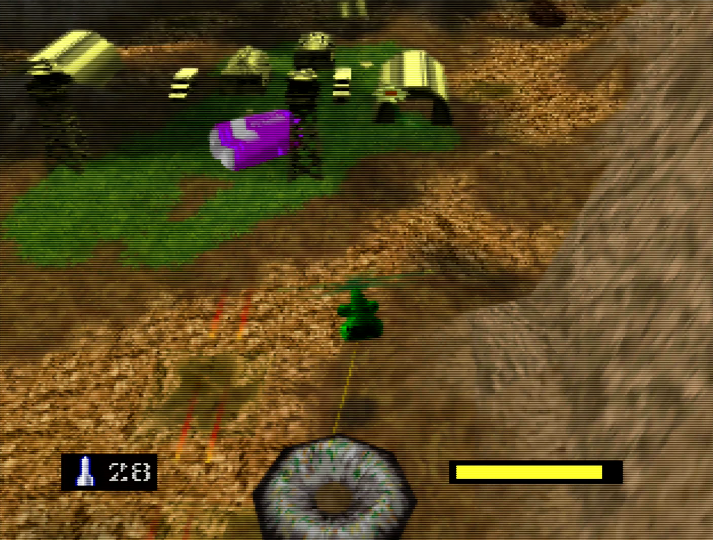 Being able to pick up rocks and apples and dump them on enemy units is really satisfying. It’s also a great way to save ammunition.

It would’ve been great if this mechanic had been a bit more fleshed out. For example, you can’t use momentum to swing and chuck objects – you can only drop them directly below. 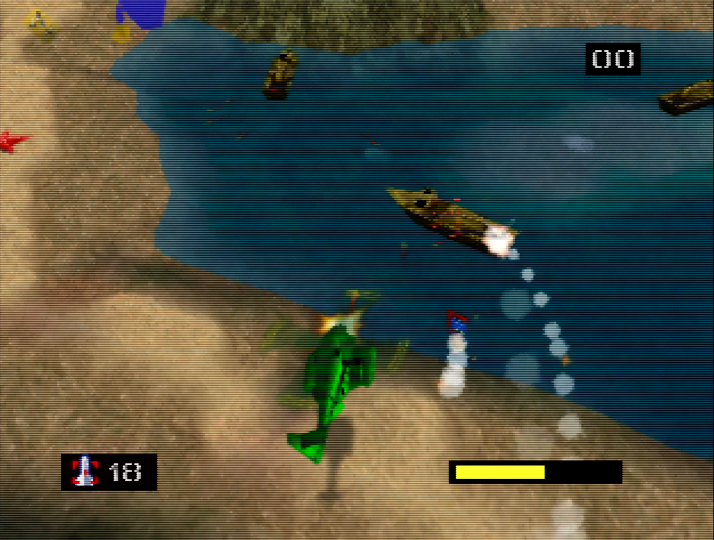 Upgrade to a newer model

You unlock new helicopters as you progress through the campaign.

Each chopper is a vast improvement over the last one. So there’s little point in going back to an earlier chopper once you’ve unlocked the next one.

Before going on each mission, you get to choose a co-pilot. These characters don’t actually assist you in manoeuvering your aircraft. 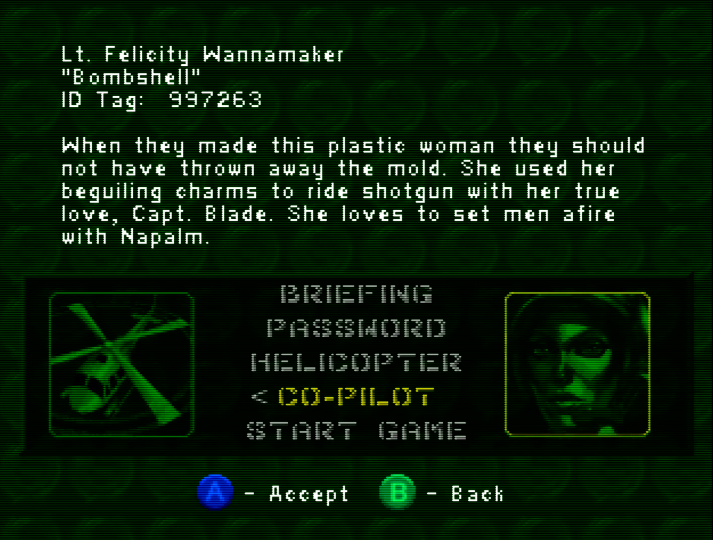 Instead, they serve as a modifier that can enhance the effectiveness of your weapons or winch. The difference they make seems negligible at best.

You are the only one who can decisively affect the outcome of a mission. Nevertheless, you do receive backup in the form of allied Green Army units. 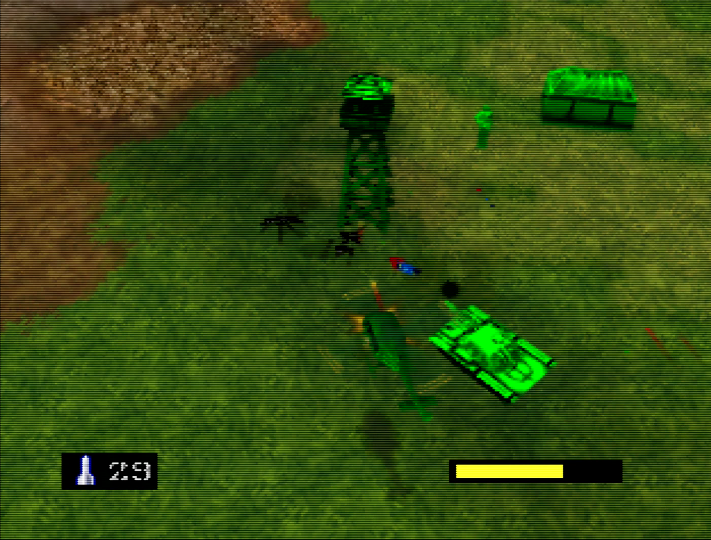 They don’t make a massive difference. But they do at least make it feel like you’re partaking in a grand battle, albeit on a miniature scale.

If you do actually need help, then there’s always the two-player coop mode. Having double the firepower at your disposal and being able to tackle separate objectives simultaneously really helps.

Unfortunately, mixing and matching in the coop mode doesn’t provide much in the way of tactical options. 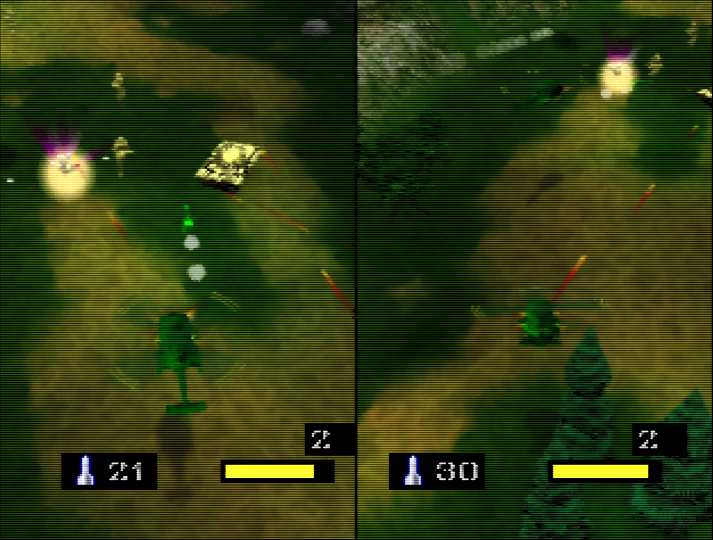 There’s also a versus multiplayer mode for up to four people.

This mode offers a range of scenarios in which players compete to destroy the most bugs or rescue the most scientists.

It’s varied and fun. And the focus is more on battling AI enemies than one another (although you can do both).

It certainly makes Army Men: Air Combat stand out a bit from other N64 multiplayer games.

Army Men: Air Combat generally looks pretty average. So it shouldn’t come as a surprise that it generally runs smoothly.

Environments sport little in the way of detail, and character and vehicle models often have very apparent gaps. 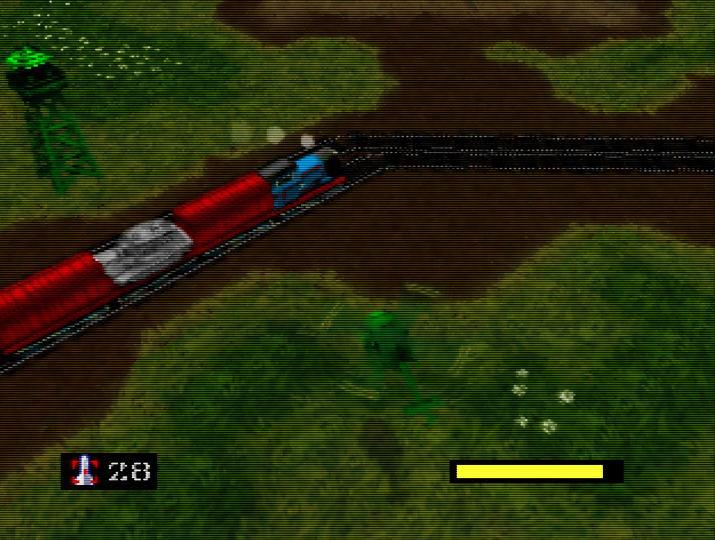 The only exception is the multiplayer mode. Due to the amount of on-screen action, the frame rate takes a hit. You also see the graphics popping up a lot as you move.

Thankfully, the coop mode doesn’t suffer from these drawbacks.

Using an N64 Expansion Pak results in a modest resolution boost. But it’s only noticeable when playing the game on a CRT TV. 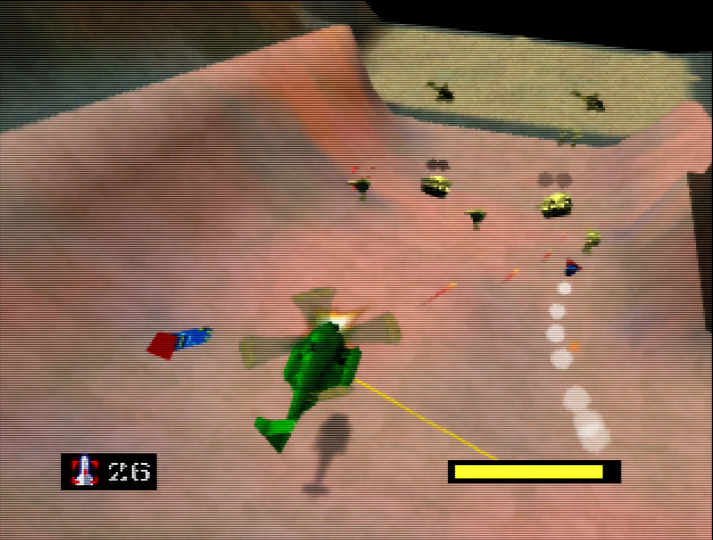 Playing on a modern HDTV through a composite connection results in a muddy, washed-out picture.

This makes it difficult to distinguish certain objects from the terrain, such as your chopper when it’s flying over grass.

The game’s light-touch story is told through static storyboards, which aren’t particularly engaging.

The image quality is especially poor. It’s a real struggle to make out what’s actually in the picture (even on a CRT). 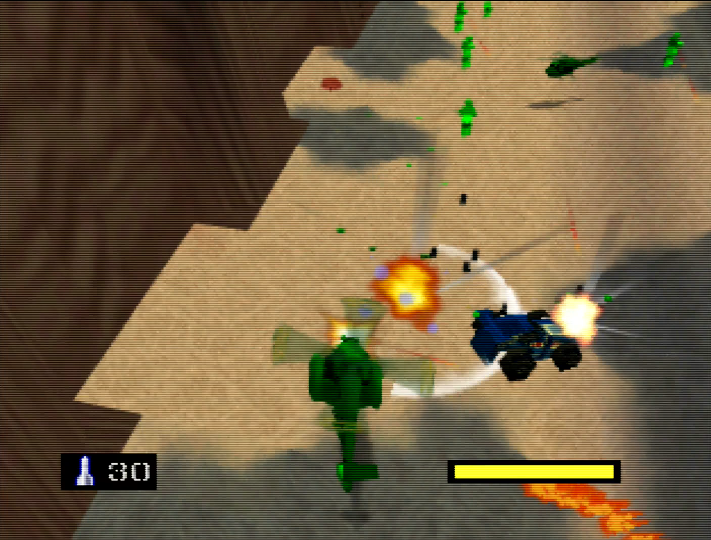 The audio also disappoints. Voice clips feature throughout, but they’re very low quality. It’s often difficult to make out what’s being said unless you crank the volume all the way up.

Not only that, but the vast majority of the soundtrack simply doesn’t suit the game’s tone or style.

That’s mainly because a lot of it has simply been lifted from BattleTanx: Global Assault – another 3DO N64 game. 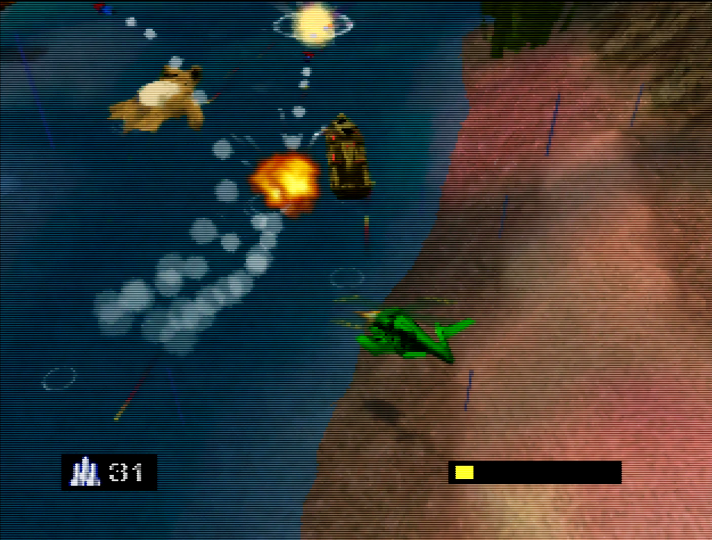 Overall, Army Men: Air Combat is a fun and straightforward game that makes the most of its premise. It’s a creative and unique – surprising for a shoot-em-up game.

The two-player coop mode is a nice addition, especially when it doesn’t suffer in terms of performance. And the competitive multiplayer has a good variety to it.

The presentation and audio are where Army Men: Air Combat truly falls down. But these flaws don’t make it any less playable.

They certainly don’t affect your level of immersion – you are, after all, playing as a green toy helicopter. 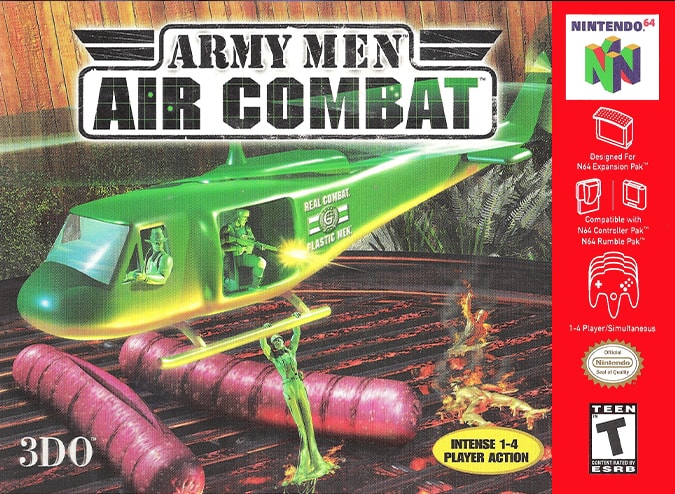